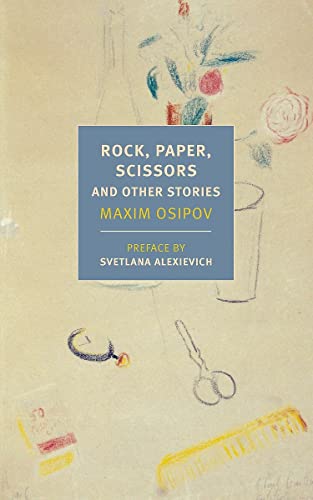 Rock, paper, scissors and other stories

Maxim Osipov, who lives and practices medicine in a town ninety miles outside Moscow, is one of Russia's best-regarded writers. In the tradition of Anton Chekhov and William Carlos Williams, he draws on his experiences in medicine to craft stories of great subtlety and striking insight. Rich in compassion but devoid of cheap sentiment, Osipov's fiction presents a nuanced, collage-like portrait of life in provincial Russia -- its tragedies, its infinite frustrations, and its moments of humble beauty and inspiration. The twelve stories in this volume depict doctors, actors and actresses, screenwriters, teachers, entrepreneurs, local political bosses, and common criminals, whose paths intersect in unpredictable yet entirely natural ways- in sickrooms, classrooms, administrative offices, on trains, and in the air. Their encounters lead to disasters, major and minor epiphanies, and -- on occasion -- the promise of redemption. "Life is scary, whether you're in Moscow, St. Petersburg, or the provinces," Osipov's narrator tells us in "The Cry of the Domestic Fowl," which opens the collection. And yet, he concludes, " t he world doesn't break, no matter what you throw at it. That's just how it's built."… (more)

LibraryThing member annbury
Good book All the russians like him because he ix a practicing doctor and reminds them of Chrkhov,
1 more
LibraryThing member icolford
Many of the characters in Maxim Osipov’s first collection of stories to be translated into English have suffered grievous losses. Others seem to be adrift, trapped in a life that lacks meaning and searching for something to fill the void. Osipov, a practicing doctor, writes briskly paced, unsentimental, loosely structured stories packed with incident that roam freely across geographies and make liberal use of flashback to fill in gaps and flesh out characters’ backstories. Like Chekhov, to whom he has been compared, Osipov’s stories examine the lives of ordinary people and tend to zero in on a transformative moment in a character’s life. In “Moscow-Petrozavodsk” a young doctor traveling by train is left shaken after witnessing what he regards as a needlessly brutal arrest by local police. In “Rock, Paper, Scissors” it is International Women’s Day and Ksenia, still mourning the death of her daughter Verochka, is stunned when a favourite employee of her restaurant, who has been arrested and charged with murder, refuses her help. The wealthy businessman in “Renaissance Man,” obsessively pursues a variety of activities in an effort to distract himself from the emptiness of his life, but is never satisfied, never feels complete, and only awakens from his torpor after committing an act of senseless violence. And in “On the Banks of the Spree” Elizaveta has traveled to Berlin to meet her sister Elsa for the first time, because her dying father had always kept his life as a spy in the GDR a secret from her. But the meeting does not go as planned because Elsa, who always thought her father was dead, is suspicious and refuses to believe her. The vast Russian landscape is often evoked in these stories, and the reader frequently senses, hovering behind the action, empty vistas stretching in all directions, the huge distances that separate people from one another. There is nothing overtly political here, but the reader is left with an impression of a country where mistrust of the government is endemic. For anyone interested in contemporary Russia, Maxim Osipov’s collection provides a fascinating window on provincial life in a land of stark contrasts and puzzling contradictions.… (more)
Fewer

Images and Shadows: Part of a Life by Iris Origo