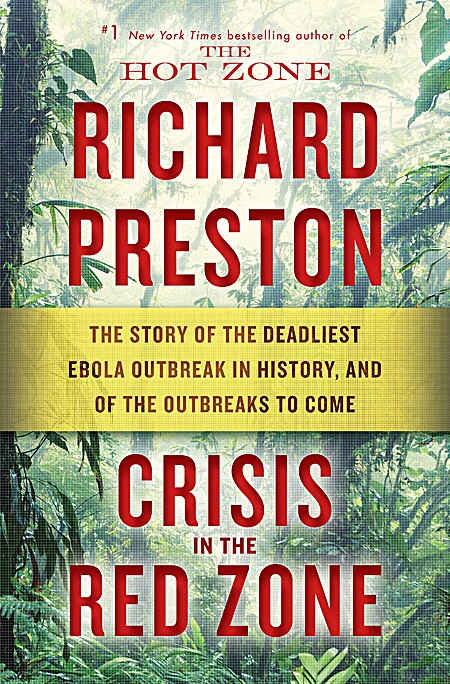 Crisis in the red zone : the story of the deadliest Ebola outbreak in history, and of the outbreaks to come

The 2013-2014 Ebola epidemic was the deadliest ever--but the outbreaks continue. Now comes a gripping account of the doctors and scientists fighting to protect us, an urgent wake-up call about the future of emerging viruses--from the #1 bestselling author of The Hot Zone, soon to be a National Geographic original miniseries. This time, Ebola started with a two-year-old child who likely had contact with a wild creature and whose entire family quickly fell ill and died. The ensuing global drama activated health professionals in North America, Europe, and Africa in a desperate race against time to contain the viral wildfire. By the end--as the virus mutated into its deadliest form, and spread farther and faster than ever before--30,000 people would be infected, and the dead would be spread across eight countries on three continents. In this taut and suspenseful medical drama, Richard Preston deeply chronicles the outbreak, in which we saw for the first time the specter of Ebola jumping continents, crossing the Atlantic, and infecting people in America. Rich in characters and conflict--physical, emotional, and ethical--Crisis in the Red Zone is an immersion in one of the great public health calamities of our time. Preston writes of doctors and nurses in the field putting their own lives on the line, of government bureaucrats and NGO administrators moving, often fitfully, to try to contain the outbreak, and of pharmaceutical companies racing to develop drugs to combat the virus. He also explores the charged ethical dilemma over who should and did receive the rare doses of an experimental treatment when they became available at the peak of the disaster. Crisis in the Red Zone makes clear that the outbreak of 2013-2014 is a harbinger of further, more severe outbreaks, and of emerging viruses heretofore unimagined--in any country, on any continent. In our ever more interconnected world, with roads and towns cut deep into the jungles of equatorial Africa, viruses both familiar and undiscovered are being unleashed into more densely populated areas than ever before. The more we discover about the virosphere, the more we realize its deadly potential. Crisis in the Red Zone is an exquisitely timely book, a stark warning of viral outbreaks to come.… (more)

LibraryThing member larryerick
The quick and dirty review is that I found it to be roughly a blend of The Andromeda Strain and The Walking Dead, especially in the beginning chapters. You'll know in the very first few pages whether or not you can handle its subject matter. Having said that, there are a number of things that make this book fairly unique, in my view. In saying that, I'm taking for granted the obvious timeliness of reading this during the current coronavirus outbreak, which this book will make clear may have issues very similar and perhaps very dissimilar to the ebola outbreak covered in the book. The author takes some pains to make sure the reader is alert to differences between diseases, even to differences between mutations within the same disease. Point #1 to make is the writing style of the person doing the reporting. Having not read any of his other books, I can't judge if this book's style was unique to this work or not, but the observation I made was that the author seemed to have purposely chosen a vocabulary level that kept an average reader from being overwhelmed with medical or technical jargon and yet never let things lapse to such a simple level that it verged into becoming a story aimed at youngsters. He was very adept at taking rather complex issues and making them quite understandable. I also point out how carefully and how faithfully he brings in multiple issues that add or subtract from efforts to confront a pandemic. Perhaps the most important of these is the overlay of medical ethics. I also found it rather unique that unlike most historians and investigative reporters books I have read, this one had very little in the way of a bibliography or other sources listed. What he reports -- and he reports quite extensively --comes from his own interviews with a great number of people upon whom he was reporting. Despite, multiple people being involved at multiple locations in multiple countries, he digs into it all, making sense of it all for the reader. As I look back at what I have written so far, I wonder if I have diminished the point I made at the top, that this is a very captivating narrative, provided the reader can handle the emotional descriptions.… (more)
7 more
LibraryThing member dcoward
WOW! This follow up to the Hot Zone had me on the edge of my seat. Reading about the unfolding tragedy really makes you think.
LibraryThing member jetangen4571
forensic-medicine, true-horror, viral-disease, Africa, contagion

Worse than Yellow Fever, Typhoid, or Malaria but mimicking both for a time, the scourge of Ebola was first seen in a village in Zambia in 1976. It certainly didn't stop there but went on a killing spree that spread and defied the medical field and investigators.
Written in a style that translates Medicalese into a language that anyone can understand and occasionally using very short sentences to emphasize the unthinkable, this is not just a history, but a warning. The scope of Ebola is somewhat diminished today, but who knows what other virus could mutate into the next horror.
I requested and received a free ebook copy from Random House Publishing Group via NetGalley.… (more)
LibraryThing member breic
I'm not sure what happened here. Maybe they didn't have time for any editing? The story moves ponderously. Maybe that's fine; the details engross us more. But the writing is repetitive—very, very repetitive. It's enough to say a fact once or twice. I don't need to be told 500 times that ZMapp hadn't been tested on humans. Reading pages and pages about a character's inability to make up his mind is also tedious. Finally, I think Preston misses the scope. There is a very narrow central crisis, and a very broad and preachy overview (`we're not prepared for the next epidemic'), but he doesn't actually give a good description of the Ebola outbreak.… (more)
LibraryThing member MontzaleeW
Crisis in the Red Zone: The Story of the Deadliest Ebola Outbreak in History, and of the Outbreaks to Come
by Richard Preston

I read The Hot Zone which dealt with the Ebola crisis in 1970's and I enjoyed how thorough the book was. This book is even better! It goes back and introduces the reader to what happened in 1970's. Then it mostly concentrates on 2013-2014. The information is presented in such a way that most of the nurses and doctors become more than just a name but a real person. We, the readers, know their families, their goals, what they do, and when. We know what happened when, what the hospitals were like. How they tried saving the community, the fears of the community, the calls they made to every world agency, including the US without getting any help!

Also the story of how behind the scenes from individual private companies were working on how to control the Ebola virus. How to save two Americans from death, a brave scientist took the formula to Africa illegally and it was used to help save lives. She was going to be tried too! The two ill Americans were flown to America to continue treatment and lived.

Government hindered progress in many cases up to that point instead of helping. I can't help think of the election campaign arguments and the discussion on Ebola. One group totally dismantled the office to protect us from dangerous viruses. The other group said they helped with Ebola. No they did not. I was hoping, while reading, that the US would intervene but even the Doctors Without Borders were a hindrance. Ebola was a crisis and no one was prepared or organized.

Being a disabled ICU nurse, I know how scary it can be at times but dealing with something like Ebola, wow, I felt for these people. It was an almost sure death if you got it.

This book brought the story of these courageous peoples lives to my heart. It angered me, it saddened me, and opened my eyes. This was written before Covid. Instead of Covid it could have been a level four virus. We need to prepare.… (more)
LibraryThing member sparemethecensor
Excellent, alarming, and horrifying. Not for the understandably queasy during 2020.
LibraryThing member SallyElizabethMurphy
Intense, very well-written. Very graphic.
LibraryThing member strangebrew
I received an advanced review copy for free from NetGalley.

Like everyone when the 2013-2014 Ebola outbreak I was scared because I didn't know a lot about it. The only things I knew where what the news was telling me, and I'm a believer that a lot of the time (in situations like this one) the media is just out to cause panic. And panic I did because I didn't understand. One day I was surfing the internet and I came across a free class centred around Ebola. I thought what better way to help my fear than to better understand it.

First off, I'm glad I took the course and have taken several public health classes since, I'm obsessed with the field, and even work as a research assistant. But that first class I ever took suggested I read "The Hot Zone" by Richard Preston (another book I will be reviewing here). From the first page, I hooked on the story he telling and knew I had to get my hands on the rest of his books. So when I got the chance to read this, I took it.

Like all of his book's this is entertaining and informative right from the start. This book covers the 2013-2014 the deadliest Ebola outbreak on record. It covers the first report to the spread of 30,000 people. We learn about the doctors and nurses who put their own lives on the line to government officials and pharmaceutical companies all dedicated to stopping the spread.

Whether you're new to the world of Ebola and public health or an expert who just wants to read more, this book is great at digging deeper and having a better understanding and respect of those working on the front lines and even those working in offices trying to stop the spread. The only thing you've got to watch out for is the book can get a little graphic. All of his books can. Its not for shock value, rather for his readers to get a better understanding of how these illness can take over the body and effects they have on it.

All in all, this is yet another one of his books that I read from time to time, and is a must for anyone interested in learning more about the outbreak.… (more)
Fewer

Midnight in Chernobyl : the untold story of the world's greatest nuclear disaster by Adam Higginbotham
Spillover : animal infections and the next human pandemic by David Quammen
Blowout by Rachel Maddow
The Great Quake : How the Biggest Earthquake in North America Changed our Understanding of the Planet by Henry Fountain