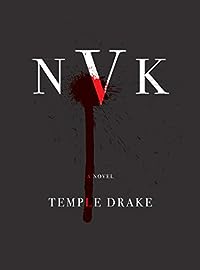 NAMED A TOP 10 BEST DEBUT NOVEL OF THE FALL BY APPLE   HER SECRET MUST BE KEPT FOR ALL ETERNITY. Set in the otherworldly megalopolis that is today's Shanghai, Temple Drake's suspenseful first novel blends the gothic, the erotic, and the supernatural as it charts an intense and dangerous affair.   One night in 2012, executive Zhang Guo Xing takes a group of European clients to a fashionable nightclub in Shanghai. While there, he meets a strikingly beautiful young Western woman called Naemi Vieno Kuusela. The physical attraction between them proves irresistible, and they embark on an intoxicating affair. But Naemi is not what she appears to be...   To Zhang's surprise, she veers between passion and wariness, conducting the relationship entirely on her own terms. He feels driven to find out more about her, and is swiftly drawn into a web of intrigue, mystery, and horror. Is she a ghost? A demon? Do the living dead walk the streets of twenty-first century Shanghai?   Written in spare, high-octane prose, NVK is the first in a series of dark, hypnotic novels that explore the roots of desire and the cruel costs of immortality.… (more)

LibraryThing member jmchshannon
I was hoping for so much more than what I received. It hints at being a vampire novel, and I guess it is, but it is unlike any other vampire story I’ve read. I can’t say I enjoyed it, and it appears to be the beginning of a series. I’m not certain why.
2 more
LibraryThing member viking2917
quirky Chinese ghost/vampire story set in modern China. It never 100% jelled for me, but an interesting take.
LibraryThing member wagner.sarah35
I'm not entirely certain how to describe this novel - a thriller, a mystery, a horror? It's a strange blend that somehow works. What the title character, NVK, exactly is never quite becomes clear, although she's clearly supernatural and yet sympathetic. The ending of this novel left me with more questions and I'm hopeful that the note on the back of this book that this is the first in a series indicates sequel will be available soon.… (more)
Fewer

Little Eyes: A Novel by Samanta Schweblin
The Bear by Andrew Krivak
The new wilderness : a novel by Diane Cook
The nickel boys : a novel by Colson Whitehead
The Glass Hotel: A novel by Emily St. John Mandel