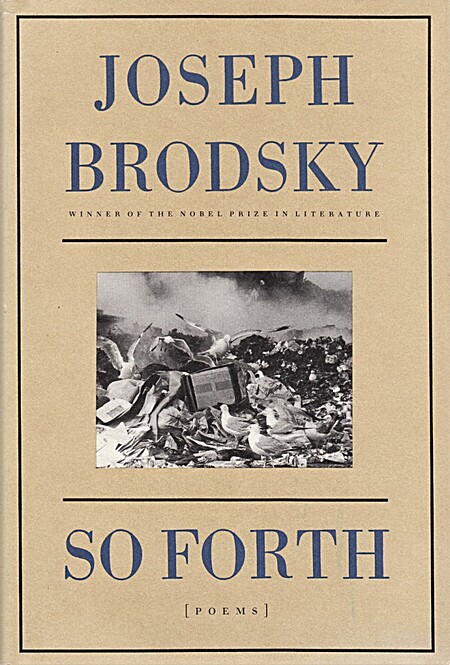 Joseph Brodsky's last volume of poems in English, So Forth, represents eight years of masterful self-translation from the Russian, as well as a by now substantial body of work written directly in English. At the time of his death in 1996 Brodsky was recognized as one of the great poets of his mother tongue; yet after twenty-four years in the United States, and decades of teaching and studying poetry in English, he had become a master of his adoptive language as well. The poems collected here reflect the many milieus he inhabited - rural Massachusetts, New York City, his native St. Petersburg, the great cities of Europe - but they are the voice of a citizen of the world, exploring the territories of language itself.

LibraryThing member jonfaith
"Great!" cries the Emperor. "What one conquers
is up to the scholar's quills.
And let the Treasury boys go bonkers
trying to pay the bills."

My reading of this late Brodsky collection was deeply influenced by yesterday's experience with the biography. Medical issues hover just off the page. Overpopulation and climate change abound. Seeking not only solace but perspective, Brodsky heralds objects at the expense of memory. The latter being but ubiquitous cigarette smoke.

The citation above highlights the eternal recurrence. My wife's brother alerted me this morning that he's found a parcel of goats for me to shepherd should we find ourselves compelled to relocate overseas.… (more)