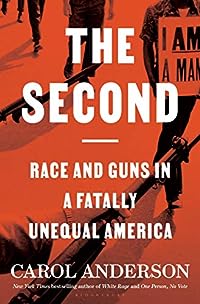 The Second: Race and Guns in a Fatally Unequal America

From theNew York Times bestselling author of White Rage, an unflinching, critical new look at the Second Amendment--and how it has been engineered to deny the rights of African Americans since its inception. InThe Second, historian and award-winning, bestselling author ofWhite Rage Carol Anderson powerfully illuminates the history and impact of the Second Amendment, how it was designed, and how it has consistently been constructed to keep African Americans powerless and vulnerable.The Second is neither a "pro-gun" nor an "anti-gun" book; the lens is the citizenship rights and human rights of African Americans. From the seventeenth century, when it was encoded into law that the enslaved could not own, carry, or use a firearm whatsoever, until today, with measures to expand and curtail gun ownership aimed disproportionately at the African American population, the right to bear arms has been consistently used as a weapon to keep African Americans powerless--revealing that armed or unarmed, Blackness, it would seem, is the threat that must be neutralized and punished. Throughout American history to the twenty-first century, regardless of the laws, court decisions, and changing political environment, the Second has consistently meant this: That the second a Black person exercises this right, the second they pick up a gun to protect themselves (or the second that they don't), their life--as surely as Philando Castile's, Tamir Rice's, Alton Sterling's--may be snatched away in that single, fatal second. Through compelling historical narrative merginginto the unfolding events of today, Anderson's penetrating investigation shows that the Second Amendment is not about guns but about anti-Blackness, shedding shocking new light on another dimension of racism in America.… (more)

LibraryThing member Stahl-Ricco
“The second amendment was, thus, not some hallowed ground but rather a bribe, paid again with Black bodies.”

The ‘right’ to bear arms was really a push to disarm Black people in the newly created United States, especially in the South, where whites feared armed slave uprisings. The militia,
Show More
as mentioned in the Second, could not take on an invading army. George Washington knew that. But, a militia could take down slave revolts.

This book lays out the history of what has happened to Blacks in the United States up to, and after, the Second Amendment. And I believe the argument that the author is dead on. From the 'founding fathers' until 2022, the 'right to bear arms' has not applied equally to all. And it isn't just 'ancient history'. Just look at two recent cases.

The difference between the cases of Kyle Rittenhouse and Tamir Rice.

Trevor Noah - "...The cops are called into a situation. They see a black person. And immediately they shoot?" "How many times have we seen a shooter who is white and a man get talked down?"

And finally, from the author - "The Second is lethal; steeped in anti-Blackness, it is the loaded weapon laying around just waiting for the hand of some authority to put it to use."
Show Less

One Person, No Vote: How Voter Suppression Is Destroying Our Democracy by Carol Anderson
How the Word Is Passed: A Reckoning with the History of Slavery Across America by Clint Smith
Four Hundred Souls: A Community History of African America, 1619-2019 by Ibram X. Kendi
White rage : the unspoken truth of our racial divide by Carol Anderson
The Heartbeat of Wounded Knee by David Treuer
2 more
Blowout by Rachel Maddow
Stony the road : Reconstruction, white supremacy, and the rise of Jim Crow by Jr. Henry Louis Gates
Fewer