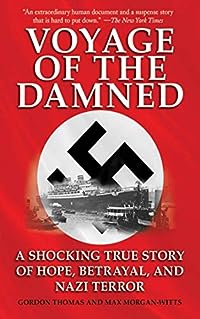 Voyage of the Damned: A Shocking True Story of Hope, Betrayal, and Nazi Terror

The "extraordinary" true story of the St. Louis, a German ship that, in 1939, carried Jews away from Hamburg--and into an unimaginable ordeal (The New York Times). On May 13, 1939, the luxury liner St. Louis sailed from Hamburg, one of the last ships to leave Nazi Germany before World War II erupted. Aboard were 937 Jews--some had already been in concentration camps--who believed they had bought visas to enter Cuba. The voyage of the damned had begun. Before the St. Louis was halfway across the Atlantic, a power struggle ensued between the corrupt Cuban immigration minister who issued the visas and his superior, President Bru. The outcome: The refugees would not be allowed to land in Cuba. In America, the Brown Shirts were holding Nazi rallies in Madison Square Garden; anti-Semitic Father Coughlin had an audience of fifteen million. Back in Germany, plans were being laid to implement the final solution. And aboard the St. Louis, 937 refugees awaited the decision that would determine their fate. Gordon Thomas and Max Morgan Witts have re-created history in this meticulous reconstruction of the voyage of the St. Louis. Every word of their account is true: the German High Command's ulterior motive in granting permission for the "mission of mercy;" the confrontations between the refugees and the German crewmen; the suicide attempts among the passengers; and the attitudes of those who might have averted the catastrophe, but didn't. In reviewing the work, the New York Times was unequivocal: "An extraordinary human document and a suspense story that is hard to put down. But it is more than that. It is a modern allegory, in which the SS St. Louis becomes a symbol of the SS Planet Earth. In this larger sense the book serves a greater purpose than mere drama."… (more)