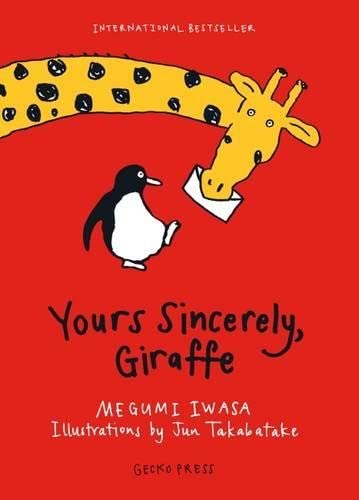 This book is about friendship and the distinctions of living in different parts of the world. A giraffe that lives in Africa meets a pelican who is a mailman. Since the giraffe is bored, she sends a letter to the first animal the pelican can find on the other side of the horizon. The letter passes on to a seal who gives it to a penguin. He reads the letter and even though he does not understand it he writes back, and becomes the giraffe's pen pal. Although they do not know what each other looks like, the giraffe decides to meet her new friend disguised as a penguin!

LibraryThing member Carlathelibrarian
Giraffe in Africa is bored. His friend Pelican has started up a mail service to give him something to do. Giraffe writes a letter to whomever is over the horizon. That turns out to be Penguin. Little does Pelican know how busy Giraffe and Penguin are going to keep him. The beginning of the book is slow, but keep going, it gets better and funnier. Penguin and Giraffe write letters back and forth getting to know each other with Giraffe trying to figure out what Penguin looks like. As he tries to dress up to look like penguin based on information from the letters, he looks funnier and funnier. Off he floats to Whale Island to meet his penpal looking nothing like a penguin. This is a great book to use with students in late primary or early junior classes when you are teaching them about letter writing. It would be great to set up a penpal program with other children from your own city or around the world. A good mentor text written in short chapter format with black and white illustrations. The publisher generously provided me with a copy of this book via Netgalley.… (more)