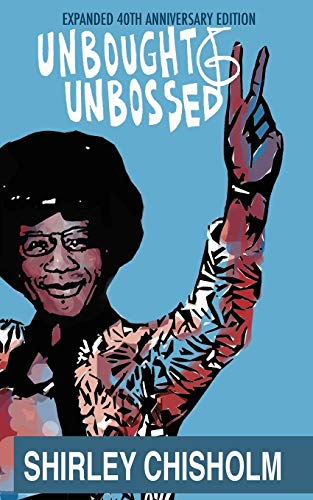 Unbought and Unbossed is Shirley Chisholm's account of her remarkable rise from young girl in Brooklyn to America's first African-American Congresswoman. She shares how she took on an entrenched system, gave a public voice to millions, and sets the stage for her trailblazing bid to be the first woman and first African-American President of the United States. By daring to be herself, Shirley Chisholm shows us how she forever changed the status quo. This expanded edition, edited by Scott Simpson, digs deeper with analysis by experts like Donna Brazile and Shola Lynch exploring Shirley Chisholm's impact on today and tomorrow's world.

LibraryThing member alycias
"I do not want anyone to conclude that I have given up hope for our representative democracy; I have not, or I would not be where I am. It is because I value the idea so much that I am often keenly disappointed byt the reality." --pg.64

"I told them that no one has a right to call himself a leader unless he dares to lead. That means standing up to be counted on the side of his people, even at the risk of his political security."--pg.127

"My role, I think, is more that of a catalyst. By verbalizing what is wrong, by trying to strip off the masks that make people comfortable in the midst of chaos, perhaps I can help get things moving."--pg.171-72… (more)

But Some Of Us Are Brave: All the Women Are White, All the Blacks Are Men: Black Women's Studies by Akasha (Gloria T.) Hull
When and Where I Enter: The Impact of Black Women in Race and Sex in America by Paula Giddings
Assata: An Autobiography by Assata Shakur
On Her Own Ground: The Life and Times of Madam C.J. Walker (Lisa Drew Books (Paperback)) by A'Lelia Bundles
I Dream a World: Portraits of Black Women Who Changed America by Barbara Summers
2 more
Crusade for Justice: The Autobiography of Ida B. Wells (Negro American Biographies and Autobiographies) by Ida B. Wells
Sister Outsider: Essays and Speeches (Crossing Press Feminist Series) by Professor Audre Lorde
Fewer