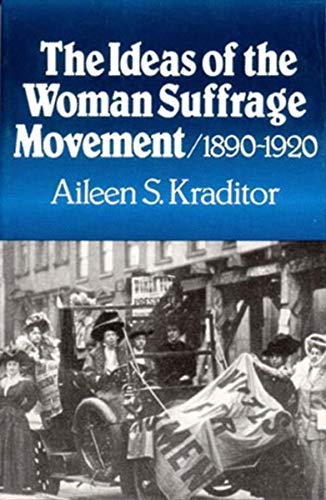 What united and moved millions of women to seek a right that their society denied them? What were their beliefs about the nature of the home, marriage, sex, politics, religion, immigrants, blacks, labor, the state? In this book, Aileen S. Kraditor selects a group of suffragist leaders and investigates their thinking--the ideas, and tactics, with which they battled the ideas and institutions impeding what suffragists defined as progress toward the equality of the sexes. She also examines what the American public believed "suffragism" to mean and how the major events of the time affected the movement.

Century of Struggle: The Woman's Rights Movement in the United States by Eleanor Flexner
Eighty Years And More: Reminiscences 1815-1897 (Women's Studies) by Elizabeth Cady Stanton
Sisters: The Lives of America's Suffragists by Jean H. Baker
With Courage and Cloth: Winning the Fight for a Woman's Right to Vote by Ann Bausum
Man's world, woman's place : a study in social mythology by Elizabeth Janeway
3 more
The Grounding of Modern Feminism by Nancy F. Cott
A Voice of Our Own: Leading American Women Celebrate the Right to Vote by Nancy M. Neuman
The Elizabeth Cady Stanton-Susan B. Anthony Reader: Correspondence, Writings, Speeches (Women's Studies) by Ellen Carol DuBois
Fewer