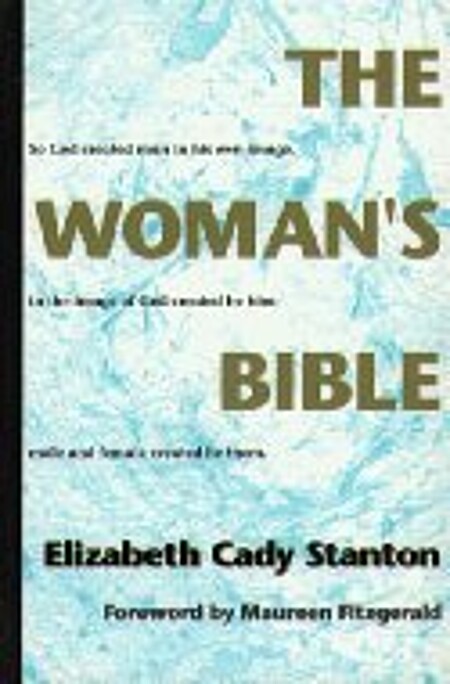 American feminist leader and suffragist Elizabeth Cady Stanton was also an outspoken critic of the Bible because the scriptures often portray women as inferior and have been used by men to justify unequal treatment of women in society. The 1870 revision of the Authorized English Version of the Bible prepared by an all-male committee from the Church of England so greatly dissatisfied Stanton that in response she courageously decided to compile a commentary by prominent feminists on the many Bible passages that refer to women. The result was The Woman's Bible, a fascinating book that explores, among other things, the documentation that Jesus believed in equal rights for men and women; the ignorance, arrogance, and hypocrisy on the part of the church hierarchy; and the slaughter of women who were slaves, wives of drunkards, or were believed to be witches. The insight that Stanton and her fellow commentators provide into biblical writings and into the minds of women of her era is enlightening and serves as an inspiration to today's feminist movement.… (more)

LibraryThing member Devil_llama
A look at the women of the Bible and their stories, by a group of women in the early 20th century. The stories they select are interesting, and ones that are often paid little attention to, and the commentary is lively. The book is somewhat dated, and many of the commentary actually demonstrate a high level of moralizing that is only slightly less puritanical than the Christian writers of the day. This is a good reminder that many of the women who were working for women's suffage actually wanted the vote so they could vote for restrictive laws based on a version of morality that had become the accepted version of the day, based on little more than personal distaste for "loose women", "obscenity", and the demon rum. The book is easy to read, and it's fun to look through the commentary that puts another spin on the stories. It reminds you of women in the Bible that weren't as popular as the ones we hear about al lthe time, and puts into perspective the inherent sexism that oozes from the book so many people swear by, but have never actually read. Recommended highest for those that wll never be willing to read it.… (more)
1 more
LibraryThing member monado
This is a reissue, with new introduction, of The Woman's Bible, the annotated one-tenth of the Christian Bible that deals with women, originally published by the women's Revising Committee and copyright Elizabeth Cady Stanton in 1895. The editors used the first and third editions of the book as their source. The book has two parts: the first discusses the Pentateuch and the second the books of Kings, Judges, the prophets, and the apostles.… (more)
Fewer

Beyond God the Father: Toward a Philosophy of Women's Liberation by Mary Daly
Eighty Years And More: Reminiscences 1815-1897 (Women's Studies) by Elizabeth Cady Stanton
When God Was a Woman by Merlin Stone
The War Against Women by Marilyn French
The creation of feminist consciousness : from the Middle Ages to eighteen-seventy by Gerda Lerner