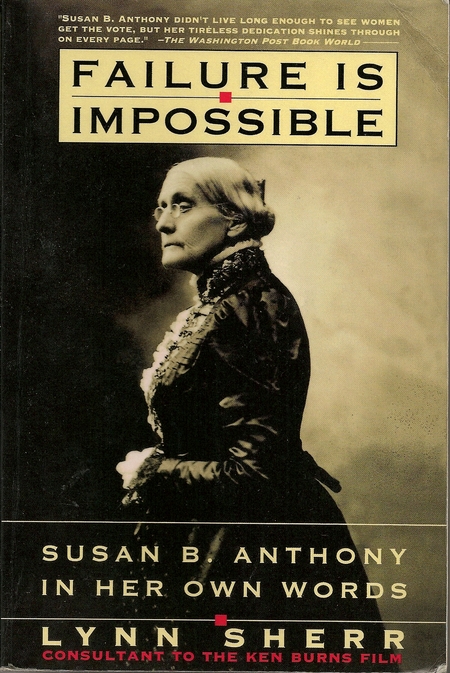 Failure is impossible : Susan B. Anthony in her own words

Susan Brownell Anthony's birthdate has its 175th anniversary in 1995, which is also the 75th year since passage of the 19th Amendment gave women the right to vote. There couldn't be a better time to remember the inspirational words of the woman who, more than any other individual, is responsible for the crusade for women's equality. Anthony's life was her work, a life of action to inspire change. Raised a Quaker, she developed a strong sense of social responsibility that drew her both to the abolitionist movement and to the suffragist cause. A tireless campaigner into her eighties (although she did not live long enough to see women get the vote), she not only helped change laws but changed attitudes and introduced the entire realm of equal rights for women to a very reluctant nation. At first ridiculed, she was ultimately welcomed into the White House and cheered in Congress.Anthony's legacy goes far beyond the vote. Eloquent, visionary, and armed with a trenchant wit, she addressed many crucial issues - equal opportunity, political representation, domestic violence, and financial autonomy - that remain at the forefront of feminism. In researching the women's movement, writes Lynn Sherr, "I learned that Anthony and her colleagues had not only gotten there first, and said it better, but that they had carefully, wittily, and sometimes painfully laid the groundwork for virtually every right we were either demanding or already took for granted."… (more)

LibraryThing member jayceebee
I don't read a lot of biographies, but this is fantastic. Full of primary sources, too. Lynn Sherr is an excellent journalist and author.

A Woman's Crusade: Alice Paul and the Battle for the Ballot by Mary Walton
Elizabeth Cady Stanton: An American Life by Lori D. Ginzberg
Century of Struggle: The Woman's Rights Movement in the United States by Eleanor Flexner
Sisters: The Lives of America's Suffragists by Jean H. Baker
With Courage and Cloth: Winning the Fight for a Woman's Right to Vote by Ann Bausum
6 more
A Voice of Our Own: Leading American Women Celebrate the Right to Vote by Nancy M. Neuman
Eighty Years And More: Reminiscences 1815-1897 (Women's Studies) by Elizabeth Cady Stanton
Eleanor Roosevelt, Vol. 1: 1884-1933 by Blanche Wiesen Cook
Eleanor Roosevelt: Volume 2 , The Defining Years, 1933-1938 by Blanche Wiesen Cook
Born for Liberty: A History of Women in America by Sara M. Evans
The Book of Women: 300 Notable Women History Passed by by Lynne Griffin
Fewer