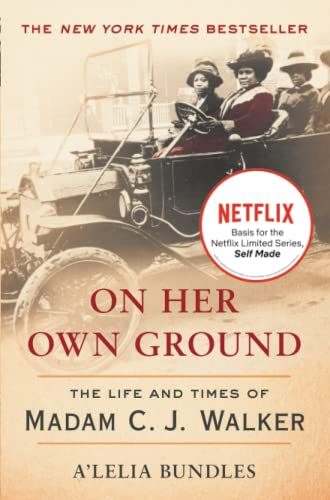 On Her Own Ground: The Life and Times of Madam C.J. Walker (Lisa Drew Books (Paperback))

Soon to be a Netflix series starring Octavia Spencer On Her Own Ground is the first full-scale, definitive biography of Madam C. J. Walker--the legendary African American entrepreneur and philanthropist--by her great-great-granddaughter, A'Lelia Bundles. The daughter of slaves, Madam C. J. Walker was orphaned at seven, married at fourteen and widowed at twenty. She spent the better part of the next two decades laboring as a washerwoman for $1.50 a week. Then--with the discovery of a revolutionary hair care formula for black women--everything changed. By her death in 1919, Walker managed to overcome astonishing odds: building a storied beauty empire from the ground up, amassing wealth unprecedented among black women and devoting her life to philanthropy and social activism. Along the way, she formed friendships with great early-twentieth-century political figures such as W.E.B. Du Bois and Booker T. Washington. On Her Own Ground is not only the first comprehensive biography of one of recent history's most amazing entrepreneurs and philanthropists, it is about a woman who is truly an African American icon. Drawn from more than two decades of exhaustive research, the book is enriched by the author's exclusive access to personal letters, records and never-before-seen photographs from the family collection. Bundles also showcases Walker's complex relationship with her daughter, A'Lelia Walker, a celebrated hostess of the Harlem Renaissance and renowned friend to both Langston Hughes and Zora Neale Hurston. In chapters such as "Freedom Baby," "Motherless Child," "Bold Moves" and "Black Metropolis," Bundles traces her ancestor's improbable rise to the top of an international hair care empire that would be run by four generations of Walker women until its sale in 1985. Along the way, On Her Own Ground reveals surprising insights, tells fascinating stories and dispels many misconceptions.… (more)

LibraryThing member kemilyh1988
Way too much name dropping that had no relevance to the narrative. The information about events happening around Madam Walker were interesting only about half the time. Some editing would have made this a 4 or 5 star book. 3.5
1 more
LibraryThing member DougBaker
What Madame C. J. Walker was able to accomplish in her lifetime is simply remarkable given the numerous impediments she encountered. She is the epitome of the rags to riches success story -- as well an example of what guts and determination really mean. While the biography is well written -- it's the facts themselves that make Madame Walker's story so intriguing and inspiring. Walker went from extreme poverty to wealthy business owner, civil rights leader, and philanthropist.

Madame Walker grew up extremely poor in Mississippi, prior to and through the turn of the century, in a society that perpetuated violence on African Americans in frightening proportions. Not only did she have to endure the racism and violence of society at large, but her own home life was destitute and abusive as well. She moved to Saint Louis, becoming a laundress and caring for her daughter -- furnishing her with the best education and protective home life that she could muster given low wages and living in poorer neighborhoods. In an effort to make her and her daughter's life better she became a sales agent for hair care products, and seeing the potential to branch out on her own with her own formula, she gradually built a large, national sales force and began manufacturing her own hair care products. As a result she became one of the wealthiest women in America.

Walker was able to accomplish this despite extreme barriers. First, racism and sexism, especially in turn of the century America, could alone have stymied any ambitions she had. She clearly, however, had the help of the African American community, and that her product was marketed primarily to women and African Americans meant that she faced only one tough competitor in this niche market. Her vision allowed her build this into something more substantial -- a national brand name and sales force. Lacking formal education, she certainly chose those who helped her run her business wisely. And she overcame husbands (three in all, two that we know much about) who, in the long run, did more to hinder than help her.

What is truly heart warming about Walker is what she did once she became wealthy. She gave freely of her money to a wide range of causes to help her local communities, the African American community, the poor, civil rights organizations, and African American soldiers during World War I. She was very vocal and active in the civil rights movements of time and was also active and vocal in national (African American) business associations. This -- plus continuing to travel widely to build up her business! It is shocking that she not more widely known for her philanthropy and for being a leader in the civil rights movement -- not to mention being such an astute businesswoman.

And she had GUTS! She stood up to Booker T. Washington and forced him to let her speak at a National Negro Business League convention. She actively helped organize and fund civil rights organizations. She must have been quite robust as well. She traveled widely across the United States and a few times overseas. In the early 1900's traveling to such an extent must have been physically and mentally exhausting.

Madame C.J. Walker was a living tribute to her local communities, her race, and the nation. She deserves more than a postage stamp to commemorate her life.… (more)
Fewer

Having Our Say: The Delany Sisters First 100 Years by Sarah Delany
Unbought and Unbossed: Expanded 40th Anniversary Edition by Shirley Chisholm
Dust tracks on a road by Zora Neale Hurston