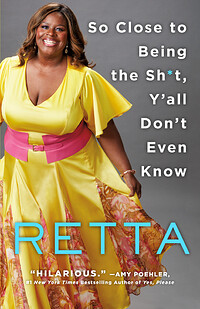 So Close to Being the Sh*t, Y'all Don't Even Know

In her hilarious book of essays, Parks and Recreation star Retta shares the stories that led to her success in Hollywood.In So Close to Being the Sh*t, Y'all Don't Even Know, Parks and Recreation star Retta takes us on her not-so-meteoric rise from roaches to riches (well, rich enough that she can buy $15,000 designer handbags yet scared enough to know she's always a heartbeat away from ramen with American cheese). Throwing her hard-working Liberian parents for a loop, Retta abandons her plan to attend med school after graduating Duke University to move to Hollywood to star in her own sitcom--like her comedy heroes Lucille Ball and Roseanne. Say what? Word. Turns out Retta might actually be on to something. After winning Comedy Central's stand-up competition, she should be ready for prime time--but a fear of success derails her biggest dream. Whether reminiscing about her days as a contract chemist at GlaxoSmithKline, telling "dirty" jokes to Mormons, feeling like the odd man out on Parks, fending off racist trolls on Twitter, flirting with Michael Fassbender, or expertly stalking the cast of "Hamilton," Retta's unique voice and refreshing honesty will make you laugh, cry, and laugh so hard you'll cry. Her eponymous sitcom might not have happened yet, but by the end of So Close to Being the Sh*t, you'll be rooting for Retta to be the next one-named wonder to take over your television. And she just might inspire you to reach for the stars, too.… (more)

LibraryThing member flying_monkeys
"stop wasting time fearing the worst. Living through the worst is never as hard as fearing it. Fight the fear and go do what you gotta do. That's what you came here for."

Being a big fan of Parks & Rec (my personality is more like a mix of Ron and April than Donna), I had to read Retta's essay collection. She didn't disappoint!

Retta's personality jumps off the page and her enthusiasm for her passions is contagious. This collection feels very much like she's sitting across the table telling you about her adventures. I don't even like carrying a purse, so collecting ($15,000) designer handbags is not my thing. Nor is coffee or football or hockey. But her stories are entertaining and funny, which is what I had expected from this book.

My favorite essay is "Membership Has Its Privileges" in which Retta recounts meeting Michael Fassbender and Idris Elba. But I also appreciated the first essay's message about talking oneself out of big opportunities.

I bet the audio version is even better!… (more)
7 more
LibraryThing member babs605
Very funny read! I didn't know who she was, as I had never seen Parks and Rec, but I will be binge watching it soon. She doesn't hold back, and it seems like you're having a conversation with a new friend
LibraryThing member Monkeypats
I love Retta as an actress and generally as a person, but this book just didn’t do it for me. It wasn’t bad, but it just wasn’t for me. I couldn’t relate to her repeatedly saying she wasn’t rich and had to pay the mortgage then saying she bought a $15,000 purse on a whim while sitting on the toilet (I care not for purses and the descriptions seemed in-depth to me). There were chapters I loved - when she talked about social media trolls and the pain that is weight loss and her obsession with Hamilton; most of the book, however, wasn’t that appealing to me. Her talking about her level of laziness or recounting the LA Kings Stanley Cup win game by game (I could not have told you the name of the LA hockey team until now) were just not that entertaining to me personally. Usually I finish a memoir/essay book loving the author more. This book didn’t make me like her any more. I still think she’s great, but this book just wasn’t for me.… (more)
LibraryThing member LibStaff2
Solid. And not for the faint-hearted. If you don't laugh out loud at some point while reading this book, I'll be surprised. I've seen a few Parks and Recs episodes, which is why I requested this one, but it was so much more. Thanks!

GoodReads FirstReads Giveaway
LibraryThing member KimMeyer
I didn't know who Retta is. And I'm not sure she really needed a book. BUT, her enthusiasm for things is so contagious! She's at her best when talking about things she loves, like hockey and Hamilton.
LibraryThing member BillieBook
Listening to memoirs or collections of personal essays on audiobook is a rather intimate experience. By the end of spending several hours in the car with Retta, i am left with the false sense of being her new bestie. She swears like a sailor and loves to get her drink on and all I want now is to hang out with her and have some drinks and watch a Kings game and I don't even like hockey. But, she never reveals anything too personal. This is not a baring of the soul. This is not a heart-to-heart. This is the things a new acquaintance shares in the getting-to-know you stage—just enough to start to engender intimacy, but not so much that either of you feels uncomfortable.

And, for fuck's sake people, stop giving the woman candles.… (more)
LibraryThing member thereserose5
Obviously already wanted to be friends with Retta, but this book solidified my love for her.
LibraryThing member DKnight0918
Thanks Netgalley for the free copy to review. Love, Love, love this memoir. Retta is an amazing actress and writer. Loved Parks and Rec, can’t wait to watch her new show. I am following her on Twitter now. Love her tweets.
Fewer

Maeve in America: Essays by a Girl from Somewhere Else by Maeve Higgins
Lena Horne: Entertainer (Black Americans of Achievement) by Leslie Palmer
This Is Just My Face: Try Not to Stare by Gabourey Sidibe
Why Not Me? by Mindy Kaling
The Wendy Williams Experience by Wendy Williams
10 more
You Can't Touch My Hair: And Other Things I Still Have to Explain by Phoebe Robinson
I Don't Know What You Know Me From: Confessions of a Co-Star by Judy Greer
Where Am I Now?: True Stories of Girlhood and Accidental Fame by Mara Wilson
You're on an Airplane: A Self-Mythologizing Memoir by Parker Posey
The girl with the lower back tattoo by Amy Schumer
Scrappy little nobody by Anna Kendrick
Are You There, Vodka? It's Me, Chelsea by Chelsea Handler
Broad Band: The Untold Story of the Women Who Made the Internet by Claire L. Evans
The Pretty One: On Life, Pop Culture, Disability, and Other Reasons to Fall in Love with Me by Keah Brown
My Horizontal Life: A Collection of One Night Stands by Chelsea Handler
Fewer