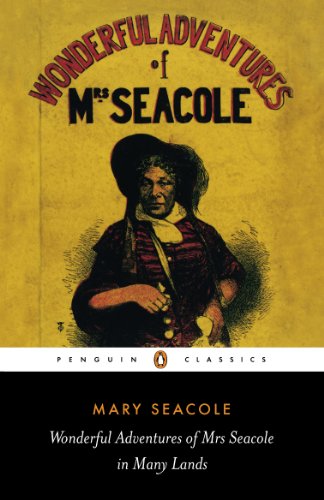 Wonderful Adventures of Mrs Seacole in Many Lands (Penguin Classics)

Written in 1857 by a free-born Jamaican Creole, Wonderful Adventures of Mrs. Seacole in Many Lands presents a special kind of success story. With delightful urbanity and wit, Mary Seacole recounts her childhood as a daughter of a Scottish army officer and free black boardinghouse keeper, heryears as a storekeeper in a Central American frontier town, and her role as a battlefield "doctress" in the Crimean War. Seeking to reconcile her desire for economic stability and worldly recognition with the more socially acceptable role of selfless helpmate to men, Mary Seacole emerges as anindependent and respected maternal figure, the model of female achievement in Victorian culture, and a symbol of "home" to British soldiers alienated by war.

LibraryThing member thorold
Even if it's something of an exaggeration to call her "the black Florence Nightingale", Mary Seacole was clearly a resourceful and enterprising woman who simply went ahead and did the things she wanted to without bothering too much about what society might expect of her. Not what you would think of as typical mid-Victorian behaviour. She grew up in a middle-class creole background in Kingston, Jamaica (her father was a Scottish soldier, her mother a free black Jamaican), was left a widow at the age of 39 and went off to Panama where she ran hotels and stores in out of the way places, most of her customers being miners on their way to or from the California goldfields.

By her own account, she was interested in medicine from an early age, and she describes her mother as a "doctress", but she never had any access to formal medical training. In Kingston she was friendly with the British troops stationed there, and helped out with nursing during several outbreaks of disease. When the Crimean War broke out, she immediately tried to volunteer as a nurse, but was repeatedly turned down - she implies that this was due to racism, but it might well have had more to do with her reputation and her CV. As a widow who had kept a pub in a mining camp she wouldn't have been a good match to the sort of profile Miss Nightingale, with her high-flown ideas about the purity of the profession, was looking for.

Having been turned down, she set out for the Crimea on her own initiative together with a business partner, a friend from Jamaica called Mr Day. They set up the "British Hotel", a canteen and store for the British forces besieging Sebastopol, a service that seems to have been much appreciated by her customers. As well as selling basic necessities and serving food and drink, she ran an informal first-aid post and dispensary, where she handed out her famously efficacious home-brew remedies. (She doesn't mention whether Jamaica's most famous herbal remedy was included in the ingredients...) William Howard Russell of the Times and the chef Alexis Soyer were among her regular guests, as well as a whole alphabet's worth of anonymised British officers.

The British Hotel remained in business until the last redcoat left the Crimea, but unfortunately it didn't make her enough money to pay off what she'd borrowed to set it up. When she got back to England, she found herself in the bankruptcy court, and had to pass the hat around her military friends. Part of her fundraising campaign was the publication of these memoirs, which were clearly something of a rushed job. Unlike most Victorian memoirs they are commendably short (around 200 pages). The late Mr Seacole only rates half a paragraph in Chapter I, and the pace is pretty relentless in the Panama chapters too: it's only when we reach the Crimea that we slow down to a proper Victorian crawl. Even through the terribly cliché-ridden Victorian prose of her incompetent ghostwriter, you can get a feel for her enormous energy and drive. It's easy enough to imagine that she must have had quite a robust sense of humour, too, but that has sadly been lost in the cleaning-up process.

Mary Seacole rather bizarrely got involved in an unedifying political row 125 years after her death, when she was suddenly "rediscovered" and voted to first place in an internet poll of "100 great black Britons" in 2004. There was a brief, opportunistic flurry of TV documentaries, course modules, streets, buildings and hospital wards named after her, etc., followed by the inevitable grumpy reaction from Peter Hitchens and friends (who came to the unoriginal conclusion that it was "political correctness gone mad") and medical professionals (who thought it rather disrespectful to those who had broken barriers of race and gender to become qualified doctors and nurses), whilst the unfortunate Education Secretary of the time got caught in the middle of it all.… (more)
1 more
LibraryThing member hansel714
Uncritical account of a "creole" woman who faced but overcame prejudice and discrimination to help in the Crimean war during the 1850s. Stories aren't milked out completely. Of historical but not literary interest.
Fewer

Mary Seacole: The Most Famous Black Woman of the Victorian Age by Jane Robinson
The history of Mary Prince : a West Indian slave by Mary Prince