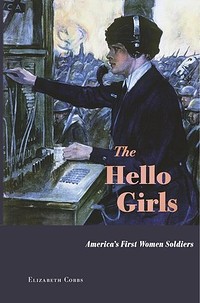 "In World War I, telephones linked commanding generals with soldiers in muddy trenches. A woman in uniform connected almost every one of their calls, speeding the orders that won the war. Like other soldiers, the "Hello Girls" swore the Army oath and stayed for the duration. A few were graduates of elite colleges. Most were ordinary, enterprising young women motivated by patriotism and adventure, eager to test their mettle and save the world. The first contingent arrived in France just as the German Army trained "Big Bertha" on Paris, bombarding the frightened city as the new women of the U.S. Army struggled through unlit streets to find their billets. A handful followed General Pershing to the gates of Verdun and the battlefields of Meuse-Argonne. When the switchboard operators sailed home a year later, the Army dismissed them without veterans' benefits or victory medals. The women commenced a sixty-year fight that a handful of survivors carried to triumph in 1979. This book shows how technological developments encouraged an unusual band to volunteer for military service at the precise moment that feminists back home championed a federal suffrage amendment. The same desire to participate fully in the life of their country animated both groups, and both struggled after 1920 to reap the rewards of victory. Their experiences illuminate ways in which sex-role change was embraced and resisted throughout the twentieth century, and the ways that men and women struggled together for gender justice."--Provided by publisher.… (more)

LibraryThing member jamespurcell
A lucid, well-documented history of an early attempt at utilizing woman for critical roles in the military. Their personal stories are embedded nicely into the larger struggle for woman's suffrage. Success in that arena did not result in any serious recognition of the role of the "Hello Girls" during WW !. Subsequent efforts after the war produced similar paltry results. A century later, recognition for the female side of our race as equals continues to be a strong need in our society.… (more)
2 more
LibraryThing member TimBazzett
With THE HELLO GIRLS: AMERICA'S FIRST WOMEN SOLDIERS, Elizabeth Cobbs has made a vital and valuable addition to the history of women's suffrage. But more particularly she has given us an intimate look at a little-known band of pioneers in the feminist movement: the brave women who manned the switchboards for the AEF in Europe during the First World War.

When the call went out in 1917 for bilingual (English-French) telephone operators to be mobilized, trained and shipped overseas, women responded in the thousands, a testament to their willingness to "do their bit" in the war. Only a few hundred were ultimately chosen and sent to France, to work under the leadership of General John "Black Jack" Pershing, and they performed admirably under difficult and often primitive conditions.

And all of this was taking place against a backdrop of women marching in protest back home, lobbying for women's voting rights, a controversial issue, which President Wilson finally came around to support. Cobbs puts the suffrage issue front and center, effectively using her narrative of the service and sacrifices of the "Hello Girls" to do this -

"Women used the conflict to achieve their long-standing demand for full citizenship. Australia, Canada, Denmark, Finland, Germany, Great Britain, New Zealand, Norway, Russia, Sweden and ten other countries enfranchised females before America. The nation accustomed to congratulating itself as the vanguard of liberal democracy brought up the rear."

But even without this "full citizenship," women volunteered for service overseas, some as young as 16 (lying about their age), others in their 30s, mostly single, but a few married. They came from all over the country to New York City, where they were "kitted up" (at their own expense), and given some rudimentary training in military customs, drilling "atop the AT&T building at 195 Broadway." But there was much confusion and disagreement about women's actual status within the military. Eventually they were equated to "cadets" - not quite officers, but a bit higher than draftees and enlisted men. On their voyage across the Atlantic (and, later, the English Channel), their convoys braved prowling German submarines, and their numbers - and those of the dough boys also on board these troop ships - were thinned by outbreaks of influenza, for which sometimes the ships were quarantined for weeks once they reached port. And, once "in-country," they had to walk a fine line as representatives of their sex in a world full of men. Usually appreciated, but often resented, these women persevered and held their heads up, doing their jobs. They also managed to bond with each other and have some fun in their off-duty time

"Merle Egan's friends sent one another into paroxysms of laughter whenever they recalled a YWCA hostess admonishing them to 'be sure you wear your brassiere" at army dances in France. 'After that,' Egan later wrote, 'whenever we had a date someone would say, 'Are you wearing your brassiere?'".

Painstakingly researched and assiduously annotated, Cobbs used diaries and letters, as well as old newspaper articles, and government records and archives to bring to life the stories of these scores of women. A few - Grace Banker, Inez Crittenden, Berthe Hunt and the LeBreton sisters - came to the fore. But it was Merle Egan (Anderson), from Helena, Montana, who saw their story through to the very end, fighting for decades after the war to have these women fully recognized for their valiant efforts.

Although the narrative may be occasionally a bit dry and slow-moving - all those notes - THE HELLO GIRLS will do much for the story of women's equal rights. In fact, it deserves to be included in supplemental reading lists for Women's Studies courses. Highly recommended.

- Tim Bazzett, author of the memoir, BOOKLOVER… (more)
LibraryThing member book58lover
Another piece of hidden American history. Switchboard operators were recruited to serve on the French front during World War I by John Pershing. Communications across the battlefield was key to troop movement and the only way to achieve this was through telephones. Women had been working for Bell Telephone in that capacity so were a logical fit for the job. Bilingual women were first chosen and they arrived soon after the Doughboys, setting up stations all across France.
Also during this time the fight for suffrage was rocking the White House and President Wilson. Pushed by Carrie Chapman Catt and Alice Paul, Wilson reversed his stance, partly based on the Hello Girls.
Knowing nothing about World War I, this book was a great capsulized discussion of the fighting and the US response to their allies. The author weaves that war effort, the working women and the suffrage movement into package. Although there was no indication that the switchboard operators were interested in suffrage or voted when they returned, it was an interesting companion piece because nothing happens in a vacuum.
A fantastically interesting book and one that I highly recommend.… (more)
Fewer

The Woman's Hour: The Great Fight to Win the Vote by Elaine Weiss
No Man's Land: The Trailblazing Women Who Ran Britain's Most Extraordinary Military Hospital During World War I by Wendy Moore
Code Girls: The Untold Story of the American Women Code Breakers of World War II by Liza Mundy
The League of Wives: The Untold Story of the Women Who Took on the U.S. Government to Bring Their Husbands Home by Heath Hardage Lee
The Firebrand and the First Lady: Portrait of a Friendship: Pauli Murray, Eleanor Roosevelt, and the Struggle for Social Justice by Patricia Bell-Scott
6 more
Heroines of Mercy Street: The Real Nurses of the Civil War by Pamela D. Toler PhD
The Ideas of the Woman Suffrage Movement: 1890-1920 by Aileen S. Kraditor
Broad Band: The Untold Story of the Women Who Made the Internet by Claire L. Evans
My Life, My Love, My Legacy by Coretta Scott King
Century of Struggle: The Woman's Rights Movement in the United States by Eleanor Flexner
The Barbizon: The Hotel That Set Women Free by Paulina Bren
Fewer