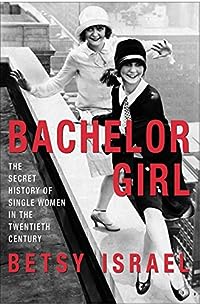 Bachelor Girl: The Secret History of Single Women in the Twentieth Century

In this lively and colorful book of popular history, journalist Betsy Israel shines a light on the old stereotypes that have stigmatized single women for years and celebrates their resourceful sense of spirit, enterprise, and unlimited success in a world where it is no longer unusual or unlikely to be unwed. Drawing extensively on primary sources, including private journals, newspaper stories, magazine articles, advertisements, films, and other materials from popular media, Israel paints remarkably vivid portraits of single women -- and the way they were perceived -- throughout the decades. From the nineteenth-century spinsters, of New England to the Bowery girls of New York City, from the 1920s flappers to the 1940s working women of the war years and the career girls of the 1950s and 1960s, single women have fought to find and feel comfortable in that room of their own. One need only look at Bridget Jones and the Sex and the City gang to see that single women still maintain an uneasy relationship with the rest of society -- and yet they radiate an aura of glamour and mystery in popular culture. As witty as it is well researched, as thoughtful as it is lively, Bachelor Girl is a must-read for women everywhere.… (more)

LibraryThing member ChicGeekGirl21
Bachelor Girl is a cultural history of women living single over the past century. Israel begins with the traditional spinster of the late 1800's and continues to the Bridget Jones's of the 1990's, covering flappers, working women of WWII, "neurotic" and "perverted" singles of the 1940's and '50's, and the "swinging singles" of the 1960's.

While a very interesting and at times surprising read, Israel continually takes a Debbie Downer tone. Rather than truly celebrating single women throughout the 20th century, Israel's attitude is one of worried depression--again and again emphasizing how much of an OUTSIDER a single woman was 100, 75, 50 years ago...and still is today. Israel herself is married and laughably shares the story of how she too was once single...until she met her husband at the ripe old age of 27.

I really liked the historical tidbits and use of primary sources in Bachelor Girl. It reminded me of one of my favorite women's cultural history experts--Lynn Peril. However, the sad sack tone of the book irked me. It was like Israel was trying to "celebrate" singleness while pointing out how single women were and still are considered freaks by society (not by Israel herself, of course!) Lynn Peril and other cultural historians are able to take a grain of salt, "whew, glad those days are past!" attitude towards history and less palatable social norms--why can't Israel?… (more)
6 more
LibraryThing member etxgardener
This is a breezy, easy to read social history of single women. While definitely written from a feminist angle, it's interesting to see how hard the idea that all women should be married with children dies.
LibraryThing member heinous-eli
This book dispels the notion that single working women are some new phenomenon that the Right ought to fight. Considering the lack of hard statistics and documentation, the author has done a thorough job of researching and writing this book.
LibraryThing member AnArtsNotebook
An good non-fic book that tells the story of the American woman through the history of the country. Entertaining, well-written and informative.
LibraryThing member kristenn
It's an interesting experience to read two consecutive books on the same basic topic, one written by an academic and the other by a magazine writer. This one is the latter. The pluses were a more accessible, breezy writing style and less thesis-proving repetition. However, a lot of details didn't quite hold up to further research, which is why I finally knocked it down from 4 stars to 3. More definitions would have also helped, especially in terms of pharmaceuticals. A remarkable number of context-vague references to drugs I'd never heard of. Finally, many quotes didn't show up in the (jumbled) bibliography, and many were interesting enough that I would have liked to have read more of the original. Which is how I ended up with this book in the first place. I just have to assume the part about how by the 1970s, 'being single, like being openly gay' was finally socially acceptable was a major typo.… (more)
LibraryThing member RubyScarlett
This is a 4.5 star-book. Sadly, Goodreads doesn't allow for half stars so I have to make do with an imperfect rating. Oh well.

Bachelor Girl is a riveting read. Its scope is both an asset and a fault - covering the representation of the single girl in all sorts of media and comparing it to the single girl's actual life, struggles and joys, and the author does so from the nineteenth century to basically Bridget Jones. It's interesting as an overview because it gives you so many starting points from which to research more should you wish to do so, but it's also disappointing in that it can only do so much by being so general.

That being said, her account is enormously interesting even though her conclusions, however horrible, are not terribly surprising. Betsy Israel writes with an honesty that's very refreshing for a history book and I greatly enjoyed every section.

Do read her introduction, she explains what she covered and what she didn't (this book is about the single white girl/woman, and while she branches out sometimes and features working class women, it's almost mostly about straight white middle-class single life in New York City). Another reviewer commented that she takes pains to really go into detail up till 1960 and then seems to lose interest, as if single women today weren't still considered a little different, if not downright peculiar.

Despite these limitations, this book is a must-read if you have an interest in history in general and woman history in particular. I'll be looking for more books on the subject that deal with the areas Israel didn't quite touch.… (more)
LibraryThing member pussreboots
I enjoyed this cultural and historical look at a type of life style I've never personally had. I don't think my college years count. On the first day of orientation I met my future husband. By our senior year we were living together. One month after graduation we were married. We're still married. I had fully expected to be a single girl for a while but it just didn't work out that way.

I really enjoyed her analysis of the cultural icons of the various decades. Her screenwriting background shows in her delightful analysis of a variety of films from the silent era all the way up through the recent television sitcoms. I think her final chapter is the weakest, but it's hard to analyize something while living in the middle of it.

I stayed up until one in the morning to finish the book which is a testiment to how well written it is.… (more)
Fewer

Bachelor Girl: The Secret History of Single Women in the Twentieth Century by Betsy Israel (Hardcover)

Pink Think: Becoming a Woman in Many Uneasy Lessons by Lynn Peril
America's Women: Four Hundred Years of Dolls, Drudges, Helpmates, and Heroines by Gail Collins
Disorderly Conduct: Visions of Gender in Victorian America by Carroll Smith-Rosenberg
Where the girls are : growing up female with the mass media by Susan J. Douglas
The Boundaries of Her Body: The Troubling History of Women's Rights in America by Debran Rowland
4 more
All the Single Ladies: Unmarried Women and the Rise of an Independent Nation by Rebecca Traister
Women of the Republic: Intellect and Ideology in Revolutionary America (Institute of Early American History) by Linda K. Kerber
When Everything Changed: The Amazing Journey of American Women from 1960 to the Present by Gail Collins
The Good Girls Revolt: How the Women of Newsweek Sued their Bosses and Changed the Workplace by Lynn Povich
Fewer