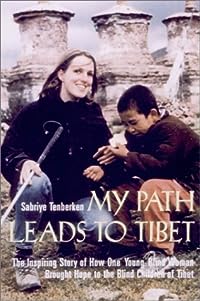 My Path Leads to Tibet: The Inspiring Story of HowOne Young Blind Woman Brought Hope to the Blind Children of Tibet

Sabriye lost her sight at the age of twelve, and had promised herself not to allow her blindness to turn her into an invalid. When she learned that, in Tibet, many blind children were shunned by society, abandoned and left to their own devices, she decided to journey there to help them... She devised a Tibetan Braille alphabet and opened the first school for the blind in Lhasa. That school is now an institution for visually impaired people of all ages. Sabriye shares the inspiring story of how she shone an unlikely light in a dark place.

LibraryThing member vernefan
“A Story of Hope and Promise”

Sabriye Tenberken, at the age of 2, contracted a retinal disease that left her blind at age 13 for the rest of her life. Born and raised in Germany, Sabriye was fortunate to have loving parents who allowed her the opportunity to have the best of care and training, and to luckily attend one of the best schools for the blind money could buy.

Never allowing herself to be pitied, assisted, or thought to be disabled mentally or physically, Sabriye considered herself fortunate to have remembered what seeing was like and injected those memories into her daily sightless life, always acting as if she was a sighted person herself.

This is her amazing story of a life of ambition and fortitude against the odds to accomplish her life goal as a teacher to other blind children. Her path from Germany leads her to the many blind children of Tibet who are brutally ostracized by their families, and left to incur poverty and lack of self worth. Disabled Tibetan children are all too often cast away into the streets to die or become beggars, their families treating them as imbeciles incapable of learning, or vermin to discard.

Beginning with her plan to invent a Braille system in the Tibetan language, she quickly overcomes that challenge, and is armed with proof that she can attain her dreams as she found it quite easy to translate her Braille machine into English, Tibetan and Chinese. Sabriye’s struggles to gain financial investors, to obtain a backer and location to build a school, and to outwit political and governmental red tape and obstacles, are those akin to what occurred in the recent story of Three Cups of Tea written by Greg Mortenson. Step by Step Sabriye’s unrelenting determination to build a school for Tibetan blind children is a tale most uplifting and one filled with much inspiration. To learn about her ability to navigate in a foreign land with nothing but her trusty white cane, to feel the wind in her hair as she rides horses about the Tibetan countryside visiting village after village seeking out blind children to recruit for her new school, is something to marvel and feel awe at, as the reader simply can’t believe her incredible abilities. Sabriye Tenberken is a wonder to behold, and certainly a guiding light to the blind people of this world. She would certainly make any “Sighted” person feel wimpy as we that can see, often do an awful lot of unnecessary whining and complaining about our lots in life.

Trials and tribulations certainly played a large part of this amazing story, but against the odds Sabriye and friends attain their prize and the blind children of Tibet are ever so happy to be learning, working, and gaining their self-confidence back. She teaches them to read, write, ride horses, play soccer, act in plays, sing and read poetry. These children become Sabriye’s protégés as they too eventually grow up and carry on her role, as she then leaves Tibet to other international frontiers in need of her expertise and assistance to the blind people of the world.

I really enjoyed Sabriye’s story and feel any reader would find her book interesting from many standpoints. This is an adventure travel book, a story of love and hope, an act of giving to others, and also an up close and personal look into the cultural of the Tibetan people.… (more)

My Journey to Lhasa by David-Néel Alexandra