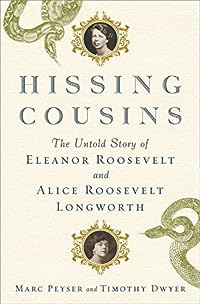 When Theodore Roosevelt became president in 1901, his flamboyant daughter was transformed into "Princess Alice," arguably the century's first global celebrity. Thirty-two years later, her first cousin Eleanor moved into the White House as First Lady. Born eight months and twenty blocks apart from each other in New York City, Eleanor and Alice spent a large part of their childhoods together and were far more alike than most historians acknowledge. But their politics and temperaments couldn't have been more distinct. Do-gooder Eleanor was committed to social justice but hated the limelight; acid-tongued Alice, who became the wife of philandering Republican congressman Nicholas Longworth, was an opponent of big government who gained notoriety for her cutting remarks (she famously quipped that dour President Coolidge "looked like he was weaned on a pickle"). While Eleanor revolutionized the role of First Lady with her outspoken passion for human rights, Alice made the most of her insider connections to influence politics, including doing as much to defeat the League of Nations as anyone in elective office. The cousins themselves liked to play up their oil-and-water relationship. "When I think of Frank and Eleanor in the White House I could grind my teeth to powder and blow them out my nose," Alice once said. In the 1930s they even wrote opposing syndicated newspaper columns and embarked on competing nationwide speaking tours. Blood may be thicker than water, but when the family business is politics, winning trumps everything.… (more)

LibraryThing member lisa.schureman
"Alice collected vices: smoking, gambling, gossiping, sleeping past noon: she was like a Girl Scout in reverse, gathering demerit badges." A wonderful read and a very interesting look inside the Hyde Park and Oyster Bay Roosevelt families represented by Eleanor Roosevelt and Alice(Princess Alice)Roosevelt Longworth two of America's most famous and politically astute women, also known as Mrs. Democrat and Mrs. Republican. Eleanor is the better remembered of the two for all her humanitarian work, My Day columns, speaking ability, and "everyman" touch. Alice not so much. She whispered in the background, displayed her cutting wit and sometimes cruel opinions at Washington dinners.
When her father, Theodore, was running for a third term with the Bull Moose party, she was quite okay with that but when her cousin, FDR did she compared him to Hitler, Mussolini, and King George. Alice with her selective memory and who only learned how much her father loved her mother at age 90, when she listened to Richard Nixon's resignation speech is fading away. On her death certificate for occupation is the word "gadfly". Ouch!… (more)
3 more
LibraryThing member Jcambridge
It's an OK read, but keeping track of family members in all the various branches of the tree is difficult at times.
LibraryThing member michigantrumpet
Eleanor Roosevelt's father and Alice Roosevelt Longworth's father were brothers. These first cousins were born months apart. Alice's father Theodore (of the Oyster Bay Roosevelts), was President of the US. Eleanor's husband Franklin (of the Hyde Park Roosevelts) followed him to the White House some three decades later.

Eleanor Roosevelt spoke widely, while also appearing on radio and in her weekly news column. Her first press conference as First Lady gave primary access to women journalists. She went on to serve as part of the US delegation at the forming of the United Nations, the first Chair of the UN Commission on Human Rights, and the first Chair of the Presidential Commission on the Status of Women at President Kennedy's behest.

Alice Roosevelt Longworth inhabited the White House through her rebellious adolescence – TR famously stated "I can either run the country or I can control Alice. I cannot possibly do both." She went on to marry a Congressman and bear a Senator’s lovechild. Alice set herself up as the guardian of her father's legacy, aggressively attacking those she deemed a threat. The tension between the Oyster Bay and Hyde Park Roosevelts was often fraught with anxiety and animosity. Oyster Bay -- Alice chief among them - felt Teddy, Jr., the natural successor to the White House and resented Franklin's success. She was a raconteur with a wide circle of influential friends and acquaintances. Through her relationships with powerful politicians, as well as hosting select dinner parties, she sought back room influence over the politics of her day. Upon her death, her occupation was listed as "gadfly".

Peyser's dual biography follows their sometimes combative and always delicate friendship throughout their lifetime. Alice was renowned for her caustic imitation of Eleanor, snide gossip against the Hyde Park President and his wife, and other efforts to undermine their position and prestige. All the while, Eleanor politely had Alice to White House dinners. Though long suffering, Eleanor was not without a jab or two of her own. In the early years, she assisted in a political stunt (involving a truck with a slogan emblazoned across its side) which contributed to TR Jr's failed bid for NY Governor. While tame by today's political standards, at the time it caused hard feelings between the two camps.

Of the two, history has treated Eleanor far more kindly. My sympathies fell more towards our First Lady. She seemed more consistent in her political ethos, and even went to battle with her own husband for what she felt was right. She sought political goals as a moral imperative, rather than seeking power for power's sake.

Peyser valiantly tries to make a case for Alice's influence. I would have loved to think she moved and shook Washington, but I don’t buy that wit and good press copy necessarily equates with true power. Ultimately, I found myself as repulsed as by modern era narcissistic celebrities. Egomaniacal to a fault, Alice Longworth wore her disdain and malevolence to others openly. Nevertheless, Alice was long a character on the national scene. Her interactions with her cousin make excellent reading. Political junkies will find plenty here, including gossip about a DC icon whose sofa’s embroidered pillow read: "If you don't have anything nice to say about anybody, come sit next to me."… (more)
LibraryThing member dorisannn
A brilliant picture of two fabulous women and the world of politics in which they both lived most of their lives. They were Roosevelts. Alice was the daughter of President Theodore Roosevelt and the cousin of both Eleanor and the man she married Franklin Delano Roosevelt...without having to change her last names.
It's also an interesting picture of how the two major parties changed over the years. Let's face it, with his anti-trust and pro-environment stance, Teddy would not be at home in the GOP of today.
The contrast of personalities and characters of these two women is fascinating. It's of interest to anyone who is interested in women in modern history and how politics has long had its dynasties.… (more)
Fewer

The Roosevelt Women: A Portrait In Five Generations by Betty Boyd Caroli
Alice: Alice Roosevelt Longworth, from White House Princess to Washington Power Broker by Stacy A. Cordery
Eleanor Roosevelt, Vol. 1: 1884-1933 by Blanche Wiesen Cook
Eleanor Roosevelt: Volume 2 , The Defining Years, 1933-1938 by Blanche Wiesen Cook
The Firebrand and the First Lady: Portrait of a Friendship: Pauli Murray, Eleanor Roosevelt, and the Struggle for Social Justice by Patricia Bell-Scott
8 more
Eleanor and Hick: The Love Affair That Shaped a First Lady by Susan Quinn
Liar, Temptress, Soldier, Spy: Four Women Undercover in the Civil War by Karen Abbott
Alice, the life and times of Alice Roosevelt Longworth by Howard Teichmann
Sisters of Fortune: America's Caton Sisters at Home and Abroad by Jehanne Wake
The Phantom of Fifth Avenue: The Mysterious Life and Scandalous Death of Heiress Huguette Clark by Meryl Gordon
Dear Abigail : the intimate lives and revolutionary ideas of Abigail Adams and her two remarkable sisters by Diane Jacobs
Rosemary by Clifford, Kate Larson (2015-12-13)
Book of Ages: The Life and Opinions of Jane Franklin by Jill Lepore
Fewer