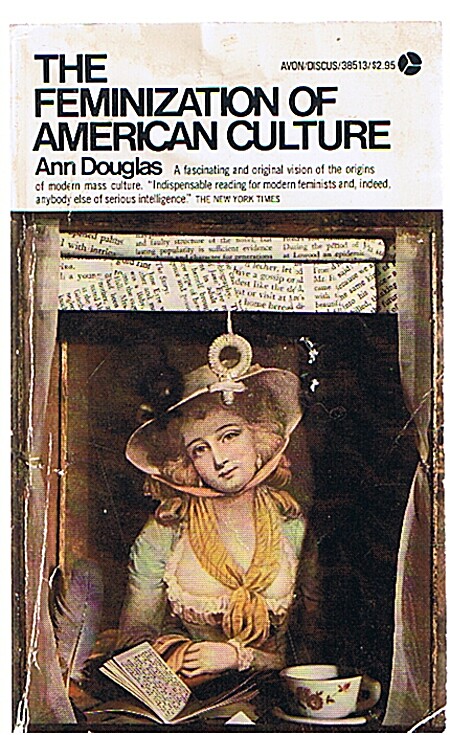 The Feminization of American Culture

This modern classic by one of our leading scholars seeks to explain the values prevalent in today's mass culture by tracing them back to their roots in the Victorian era. As religion lost its hold on the public mind, clergymen and educated women, powerless and insignificant in the society of the time, together exerted a profound effect on the only areas open to their influence: the arts and literature. Women wrote books that idealized the very qualities that kept them powerless: timidity, piety, and a disdain for competition. Sentimental values that permeated popular literature continue to influence modern culture, preoccupied as it is with glamour, banal melodrama, and mindless consumption. This new paperback edition, with a new Preface, will reach yet more readers with its persuasive and provocative theory. Richard Bernstein of "The New York Times "said: "Her remarkable scholarship is going to set the standard for a long time to come."… (more)

The Grounding of Modern Feminism by Nancy F. Cott
Inessential Woman by Elizabeth V. Spelman
Women of the Republic: Intellect and Ideology in Revolutionary America (Institute of Early American History) by Linda K. Kerber
Disorderly Conduct: Visions of Gender in Victorian America by Carroll Smith-Rosenberg
Woman, Culture, and Society by Michelle Zimbalist Rosaldo
7 more
The creation of feminist consciousness : from the Middle Ages to eighteen-seventy by Gerda Lerner
The Ideas of the Woman Suffrage Movement: 1890-1920 by Aileen S. Kraditor
The female imagination by Patricia Meyer Spacks
Pink Think: Becoming a Woman in Many Uneasy Lessons by Lynn Peril
A History of U.S. Feminisms (Seal Studies) by Rory C. Dicker
Beyond Separate Spheres: Intellectual Roots of Modern Feminism by Rosalind Rosenberg
Women Class And The: Feminist Imagination (Women In The Political Economy) by Karen Hansen
Fewer