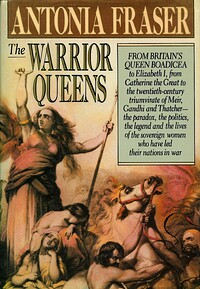 Antonia Fraser's Warrior Queens are those women who have both ru and led in war. They include Catherine the Great, Elizabeth I, Isabella of Spain, the Rani of Jhansi, and the formidable Queen Jinga of Angola. With Boadicea as the definitive example, her female champions from other ages and civilizations make a fascinating and awesome assembly. Yet if Boadicea's apocryphal chariot has ensured her place in history, what are the myths that surround the others? And how different are the democratically elected if less regal warrior queens of our time: Indira Ghandi and Golda Meir? This book is much more than a biographical selection. It examines how Antonia Fraser's heroines have held and wrested the reins of power from their (consistently male) adversaries.… (more)

LibraryThing member bookcrushblog
Another lovely work by Antonia Fraser. This time she looks at rulers beyond Europe, though the Americas are still sadly underrepresented... I wonder if this is due to interest or historical fact.

This was a particularly interesting read as Hillary Clinton was in the midst of running for President
Show More
here in the U.S. -- it was very insightful to see that many complaints against Clinton (such as her "shrill" voice) were complaints leveraged among female leaders throughout history.

A timely, beautiful read. Can't recommend it enough.
Show Less
10 more
LibraryThing member ffortsa
Fraser surveys what she calls warrior queens, beginning with Boadicea, or Boudica, queen of the Iceni in Roman Britain, and ending with Margaret Thatcher in our own time.

I wish I had enjoyed the book more. But I found the author's constant speculation annoying, and her prose surprisingly uneven.
Show More
Is it an accepted affectation to write a sentence without a verb? Her definition of 'syndromes' of associating powerful women with justifying male relationships is convenient but speaks more to the times of her biographical subjects than some deep fault in human character. Modern western society is not the first to attempt to honor women for themselves - in fact, i don't think we do a very good job. Her own comments indicate that other cultures may have done better, even if the public utterances rely on the formulas of her described syndromes.

The book did introduce me to aspects of world history I had no experience of, which kept me reading. I found the sections on Queens Isabella of Spain and Louise of Prussia particularly interesting, probably because I had some knowledge of other events of those times, and other subjects entice me to read more European and colonial history. But I'm not sure I'd recommend this text.
Show Less
LibraryThing member wyvernfriend
interesting but somewhat light in the information, a good place to start from to if you want to do some research on warrior queens in history and the influence that Boudicia had on them and on the interpretation of them in the history books.
If you want more information look elsewhere and it left me
Show More
wanting more.
Show Less
LibraryThing member amanda4242
I finished Fraser's truly awful Warrior Queens today. She jumps back and forth between time periods constantly, keeps trying to relate every woman she writes about to Boudica and her legend, is in love with her own lame terminology, and dedicates a lot of ink to speculation. I can't even say that I
Show More
trust her research since in chapter 14 she calls Pocahontas "a member of the Sioux tribe": I don't have words enough to say how wrong this statement is.*

Avoid this one at all costs.


*Seriously, it's like saying Eleanor of Aquitaine was Polish.
Show Less
LibraryThing member kherrington
An interesting history book, focusing mostly on European female rulers/leaders, beginning with Boadicea, a Celt, and ending with Margaret Thatcher. The overall affect of the book is kind of depressing in light of the repeated misogyny of these women, misogyny that still goes on today.

I thought the
Show More
book would have been more readable and more enjoyable if Fraser hadn't been so adamant about so explicitly linking all of the women with their predecessors. The constant references to the past do work to show a pattern of behavior and ideas, but it also makes the book too repetitive in places.
Show Less
LibraryThing member athenaeum135
A must for anyone studying martial women, and those interested in women's studies or military history.
LibraryThing member Helenliz
This is an interesting read. It intends to look at women who have been a reigning head of state and lead a state into battle. It starts with Boadicea, and looks at how different women in apparently similar positions have been viewed through time. So there are medieval queens through to modern heads
Show More
of states. The range of countries represented is not huge, focused mainly on Europe. She identified a number of way sin which these disparate women have been represented and, in fact, represented themselves. They fall into a number of categories, some of which act as opposites. They may be represented as either chaste or a virago, even if they are, in fact neither. They may play on the "I'm only a weak & feeble woman" line to their own advantage. Their supporters and enemies may have widely differing views of them, the truth probably lies in neither story. The later heads of state seem to be doubly castigated - by men the are seen as only a women, by women that are cast as being honorary men. Can't win either way.
It can;t by its nature, be a detailed history, but there's enough detail here to provide some background and put the lady in question into a social and cultural context. There are also enough notes and references that further reading could be readily identified.
I found the evolution of the Boadicea myth through the ages the most interesting, who she was reinvented for each succeeding generation, moving from leading a bloody uprising to being viewed as an establishment figure. How times change. This was an interesting read, and one that shows that the more we think things change the more they stay the same.
Show Less
LibraryThing member maunder
Fraser examines an interesting list of women down through the ages who have led their nations especially but not always in time of war. She refers to stereotypical roles such as the "appendage" model or the "voracity" model to seek to explain how the subject under examination was or wasn't
Show More
successful in leading their subjects. She refers to the male dominated age in which we live and also to a pre-historic age in which matriarchal societies were the norm. Occasionally the narrative is marred by sentences interrupted by asides which would be better footnoted.
Show Less
LibraryThing member TheDivineOomba
I liked the information about the warrior queens - but the obsession of Boadicea, referenced in every chapter, often randomly, really made this book annoying. I get that she is the epitome of what a warrior queen should be, but with scant facts about her, and only one sided information, it got old
Show More
fast.

Second, queens from non-europe was not featured as much as they should - be we have a queen from Africa and Asia, and I found these a lot more interesting than the rest of the queens. The writing is a bit dry, but British, and I suspect the information is well researched. Overall, a decent introduction into the subject, but I suspect there are better books on the subject.
Show Less
LibraryThing member mahallett
just not very interesting.i am losing interest in Fraser.
LibraryThing member amandacb
An informative overview of powerful, influential warrior queens throughout the ages. Fraser does not shy away from presenting information in a pedantic light, so it may not be the most exciting bedtime reading; however, certain chapters, such as Boudicea and the Amazons, are exciting enough in
Show More
their own right.
Show Less
Fewer