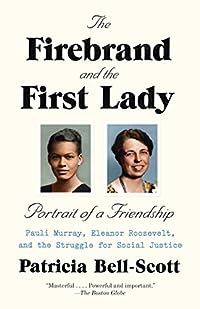 The Firebrand and the First Lady: Portrait of a Friendship: Pauli Murray, Eleanor Roosevelt, and the Struggle for Social Justice

Pauli Murray first saw Eleanor Roosevelt in 1933, at the height of the Depression, at a government-sponsored, two-hundred-acre camp for unemployed women where Murray was living, something the first lady had pushed her husband to set up in her effort to do what she could for working women and the poor. The first lady appeared one day unannounced, behind the wheel of her car, her secretary and a Secret Service agent her passengers. To Murray, then aged twenty-three, Roosevelt's self-assurance was a symbol of women's independence, a symbol that endured throughout Murray's life. Five years later, Pauli Murray, a twenty-eight-year-old aspiring writer, wrote a letter to Franklin and Eleanor Roosevelt protesting racial segregation in the South. The president's staff forwarded Murray's letter to the federal Office of Education. The first lady wrote back. Murray's letter was prompted by a speech the president had given at the University of North Carolina, Chapel Hill, praising the school for its commitment to social progress. Pauli Murray had been denied admission to the Chapel Hill graduate school because of her race. She wrote in her letter of 1938: "Does it mean that Negro students in the South will be allowed to sit down with white students and study a problem which is fundamental and mutual to both groups? Does it mean that the University of North Carolina is ready to open its doors to Negro students? Or does it mean, that everything you said has no meaning for us as Negroes, that again we are to be set aside and passed over?" Eleanor Roosevelt wrote to Murray: "I have read the copy of the letter you sent me and I understand perfectly, but great changes come slowly ... The South is changing, but don't push too fast." So began a friendship between Pauli Murray (poet, intellectual rebel, principal strategist in the fight to preserve Title VII of the 1964 Civil Rights Act, cofounder of the National Organization for Women, and the first African American female Episcopal priest) and Eleanor Roosevelt (first lady of the United States, later first chair of the United Nations Commission on Human Rights, and chair of the President's Commission on the Status of Women) that would last for a quarter of a century. Drawing on letters, journals, diaries, published and unpublished manuscripts, and interviews, Patricia Bell-Scott gives us the first close-up portrait of this evolving friendship and how it was sustained over time, what each gave to the other, and how their friendship changed the cause of American social justice.… (more)

LibraryThing member gayla.bassham
Pros: This is a very interesting book. I knew virtually nothing about Pauli Murray and I am now practically the president of her fan club. It is worth reading this book just to discover how enormously cool and accomplished this woman was.

Cons: I almost feel like Eleanor Roosevelt was added as a hook to get people to read about Pauli Murray. I thought this would be more of a dual biography, but it's mostly about Pauli Murray with a little bit of ER sprinkled in. Again, I loved learning about Pauli Murray! It just didn't feel like this was the book I thought I was going to read, and honestly I think I might have preferred a straight-up bio of Murray. Also, the writing is not stellar, below the level I would expect for an NBA longlistee.… (more)

Eleanor Roosevelt, Vol. 1: 1884-1933 by Blanche Wiesen Cook
Eleanor and Hick: The Love Affair That Shaped a First Lady by Susan Quinn
Hissing Cousins: The Untold Story of Eleanor Roosevelt and Alice Roosevelt Longworth by Marc Peyser
Elizabeth Cady Stanton: An American Life by Lori D. Ginzberg
Stateswoman to the World: A Story About Eleanor Roosevelt (Creative Minds Biography) by Maryann N. Weidt
8 more
Rise of the Rocket Girls: The Women Who Propelled Us, from Missiles to the Moon to Mars by Nathalia Holt
My Life, My Love, My Legacy by Coretta Scott King
Eleanor Roosevelt: A Photoillustrated Biography (Read and Discover Photo-Illustrated Biographies) by Lucile Davis
The Woman's Hour: The Great Fight to Win the Vote by Elaine Weiss
Eleanor Roosevelt: Volume 2 , The Defining Years, 1933-1938 by Blanche Wiesen Cook
Margaret Sanger : a life of passion by Jean H. Baker
Romantic Outlaws: The Extraordinary Lives of Mary Wollstonecraft & Mary Shelley by Charlotte Gordon
Irrepressible: The Jazz Age Life of Henrietta Bingham by Emily Bingham
Fewer