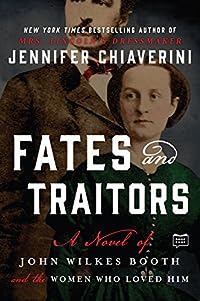 Fates and Traitors: A Novel of John Wilkes Booth and the Women Who Loved Him

"The New York Times bestselling author of Mrs. Lincoln's Dressmaker returns with a riveting work of historical fiction following the notorious John Wilkes Booth and the four women who kept his perilous confidence. The world would not look upon his like again. John Wilkes Booth--driven son of an acclaimed British stage actor and a Covent Garden flower girl, whose misguided quest to avenge the vanquished Confederacy led him to commit one of the most notorious acts in the annals of America--has been the subject of scholarship, speculation, and even obsession. Though in his plot to assassinate President Abraham Lincoln Booth did not act alone--"I am determined to be a villain," he tragically prophesized on the occasion of his acclaimed 1862 New York City debut in the role of Richard III--he is often portrayed as a shadowy figure, devoid of human connection. Yet four women were integral in the life of this unquiet American: Mary Ann, the mother he revered above all but country; his sister and confidante, Asia; Lucy Lambert Hale, the senator's daughter who loved him; and the Confederate widow Mary Surratt, to whom he entrusted the secrets of his vengeful wrath. In Fates and Traitors, New York Times bestselling author Jennifer Chiaverini renders for the first time as fiction the compelling interplay between these pivotal actors--some willing, others unwitting--who made an indelible mark on the history of our nation"--… (more)

LibraryThing member Virginia51
This was back to what I like about Jennifer Chiaverini. This was well written and I did not want to put it down. It makes you not hate the whole family of Booth's. This made the whole family seem real and gave a reason for why John Wilkes Booth did what he did. Still dislike him but can stand the family now. It is even hard to hate the other conspirators. Keep writing like this. I received an ebook copy of this from Firsttoread for a fair and honest opinion.… (more)
4 more
LibraryThing member Cariola
Fates and Traitors is a fictionalized account of the lives of several people--particularly women--involved with John Wilkes Booth. The novel is divided into several sections, each taking a different point of view. The first is Mary Ann Holmes, wife of the renowned English Shakespearean actor Junius Brutus Booth. Through her, we learn that Booth abandoned his wife and child and, to avoid scandal, sailed for America with Mary Ann. (The two were only able to marry after many years and the birth of seven children.) Mary Ann's first section details her life as the wife of a travelling actor, trying to make ends meet on a Maryland farm in his absence. We hear from Mary Ann again, later in the story, and learn of her concerns for her children--particularly her favorite, known as Wilkes in the family, who resented his brothers' success on the stage and was determined to make a name for himself.

There are also several sections focused on Mary Surratt, a widowed tavern/boarding house owner with Confederate sympathies. It was in her home that the Lincoln assassins met to conspire, and her son was deeply involved in the plot as well. The author makes her own decisions as to the role that Mary herself might have played, but these sections make her a sympathetic mother to Junior and Anna, one who had survived abuse at the hands of their father and relied heavily on her Catholic faith.

Only one section presents the specific point of view of John Wilkes Booth; another focuses on his beloved sister Asia and is particularly moving in presenting her reactions to the aftermath of the assassination. Finally, there are a number of sections centered on Lucy Hale, daughter of a New Hampshire senator and reputed fiancée of Booth. I knew little about this woman and found her sections--Booth's courtship, her parents' disapproval, her reaction to the murder and Booth's death, and, finally, her life 25 years later--to be the most intriguing.

All of the characters are very well developed, and Chiaverini gives much insight into their thoughts, feelings, and motivations. These, rather than the Lincoln assassination itself, take center stage. Due to moving among several points of view, the story makes a number of shifts back and forth in time, but the author handles this well. I strongly recommend this book to anyone who enjoys character-driven historical fiction.… (more)
LibraryThing member wagner.sarah35
To be fair, I likely would have given this book another star had I not read Hanging Mary (also about the Lincoln assassination) just a few months ago. As it is, I did read that book and I found it far more compelling than Fates and Traitors. Still, I appreciate this novel for bringing Booth's sister, Asia, into the story. I had not encountered this woman previously and with the extensive writing she did later in life, she is certainly overlooked. Overall, this book is a good, but not great, novel about one of America's most dramatic episodes.… (more)
LibraryThing member eawsmom
Thanks to the other reviewer who mentioned "Hanging Mary," I now know why portions of this book seemed very familiar. I, too, read "Hanging Mary" and while the verbiage differed, I was still plagued by the idea that I'd read something similar in the recent past.

This book differs from "Hanging Mary" in that it presents the lives of four women who played a role in John Wilkes Booth's life: his mother Mary Ann, his sister Asia, his possible fiancee Lucy, and boarding-house owner Mary Surratt. All of them react with horror when they learn of Booth's assassination of President Lincoln, even Mrs. Surratt who had (according to this book, at least) argued against harming Lincoln in any way since the war was essentially over and nothing would be accomplished by it.

The book was well-written, but I didn't find myself thoroughly fascinated by it, nor did I find it as easy to read as other books by this author. Perhaps that's because I know what Booth did and have a hard time casting him in the role of central figure in a work of historical fiction. I feel the author's other books about the Civil War era ("Mrs. Lincoln's Dressmaker", "The Spymistress", etc.) to be more appealing and interesting.… (more)
LibraryThing member brangwinn
I love Chiaverini’s historical fiction books. As with all the rest I was pulled into this story about John Wilkes Booth. At first, I was confused by what seemed like a disjointed story, but then I realized this was needed to flesh out all the other people in his life. One wonders at the path he chose to become remembered in American history.… (more)
Fewer