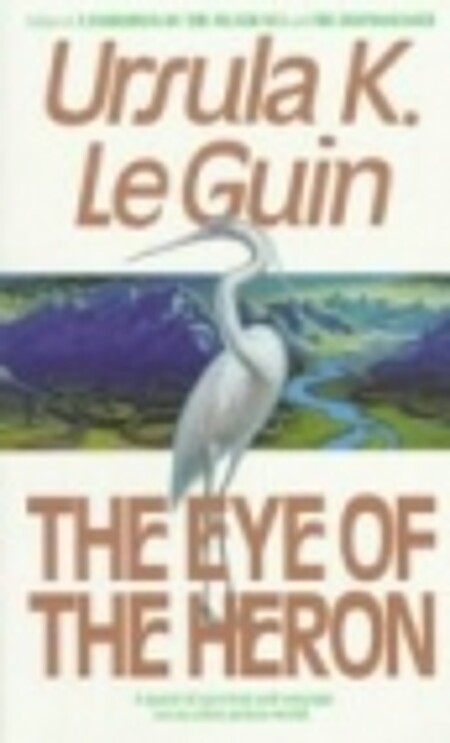 The Eye of the Heron

In Victoria on a former prison colony, two exiled groups--the farmers of Shantih and the City dwellers--live in apparent harmony. All is not as it seems, however. While the peace-loving farmers labor endlessly to provide food for the City, the City Bosses rule the Shantih with an iron fist. When a group of farmers decide to from a new settlement further away, the Bosses retaliate by threatening to crush the "rebellion." Luz understands what it means to have no choices. Her father is a Boss and he has ruled over her life with the same iron fist. Luz wonders what it might be like to make her own choices. To be free to choose her "own" destiny. When the crisis over the new settlement reaches a flash point, Luz will have her chance.

The Eye of the Heron is a short novel that was originally published in the collection Millennial Women, edited by Virginia Kidd. A straightforward story that reads like a fable, The Eye of the Heron is set on the alien planet of Victoria, where there are two groups of settlers: the farmers of the village of Shantih and the wealthier City inhabitants. The rest of the planet is uninhabited except by strange animals, including the long-legged, elegant, gray creatures called “herons” because of their resemblance to the bird, who gaze on the humans’ activities impassively; and the small, funny shape shifters called “wotsits,” who die in captivity but will sometimes alight on a person’s hand.

The book opens and closes with a person watching a wotsit change shape and color in his palm before flying away. These two framing incidents are both hopeful, representing a brief communion between the human and his new world. In fact, The Eye of the Heron could be classified as fantasy, if we did not know that both groups of settlers came to the planet on spaceships, exiles from a future Earth. The City dwellers were descended from prisoners, while the people of Shantih were leaders of a movement called the People of the Peace, a nonviolence movement that had gained too many adherents back on Earth. The brief glimpses of Earth’s future history, as related in the tales of the exiles’ descendants, add some layers of complexity to this otherwise straightforward tale.

Lev, the young leader of the Villagers, is returning home with a scouting party when the story opens. The Villagers have found a location for a new settlement, but the City Council won’t let them go, not wanting to lose their supply of low-paid workers and farmers. The People of the Peace respond with nonviolent civil disobedience, and several of them are arrested. One of the older leaders, Vera, is imprisoned in a Councilor’s house, where she begins to influence the Councilor’s daughter, Luz.

Luz, learning that her father has recruited an army of brutish young men to enslave the Villagers, flees her home to warn Lev and the others. Once there, she chooses to stay, a decision that drives her father and her suitor back in the City to irrational action. Luz tries to talk Lev into simply leaving Shantih, but he insists on following his people’s nonviolent ideals, which leads to tragedy. After things return to normal, though, Luz’s arguments eventually win over some of the Villagers, and she takes a group on an expedition to found a new home as the story ends.

Though unambiguous and very short, The Eye of the Heron explores many interesting ideas. The People of the Peace believe strongly that each individual makes his or her own choices, and the choices that the settlers make after being stranded on an alien planet — after being given a clean slate, in effect — are of interest to Le Guin. Do they wall themselves off in the City and attempt to control the uncontrollable? Do they hold on to the ways of Earth and refuse to adapt, even when it might mean their deaths? Or do they embrace their circumstances and make this planet their new home, adapting to it? Le Guin explores all of these choices, but clearly, it is the last one that holds the most promise at the end. I wouldn’t say that this is Le Guin’s best work, but it is certainly enjoyable and thought-provoking.… (more)
7 more
LibraryThing member danconsiglio
Le Guin is another one of those writers who can do no wrong in my book. She is imaginative, culturally aware, and philosophically consistant. Her stories include characters from a variety of backgrounds and she celebrates differences between people without stereotyping. Also her stories are badass. She pulls no punches and seems to delight in pulling out the nastiest tendencies of humanity and making her readers accept them as part of our species flaws while encouraging us to rise above them. This book is a small part of the Hanish Cycle which I have long ago given up on reading in order or even fully understanding the overall plot arc of. It is awesome as it is, even if I can't quite see the full picture.… (more)
LibraryThing member aulsmith
A group of pacifists on an alien planet confront a militaristic culture. A little preachy and not one of Le Guin's best, but it had some interesting people faced with some really difficult problems which I thought made it worth reading -- Billie
LibraryThing member EmScape
Le Guin has developed yet another “peaceful” society on another planet. This one, though, originated on Earth many years into our future. The Victoria Settlement was at first a penal colony, but about 50 years later The People of the Peace were sent. Obviously, there’s a lot of conflict between the two groups. The latest confrontation has arisen because the Peace People would like to start another settlement. The criminal descendants don’t want to let them go because they do a lot of the menial labor and farming. The People are committed to non-violence, but the others embrace it. The dilemma becomes how to get what they want without anyone getting hurt.
This is a largely philosophical novel, though not completely lacking in action. I would have liked for it to have gone on longer and explored the aftermath of the conflict’s “resolution.”
I have been reading a lot of LeGuin lately, and it seems to me that she enjoys creating a complex society of peaceful people and then putting them in situations where their values are tested. I wonder if she is doing serial thought experiments, trying to come up with a possible utopian society. It’s interesting to think about because all of her peaceful societies have some values in common, but different structures. It’s endlessly fascinating to me, but I can see how some might get bored of reading them in succession.… (more)
LibraryThing member themulhern
This book was published almost ten years after "The Left Hand of Darkness" and considerably after "The Dispossessed" and yet it seems much less mature than either. It is quite short, almost a novella, and that may contribute to this impression.

It is interesting because it is a story of the failure of ideals. A culture which defines itself by its non-violence comes into violent conflict with its adversary culture. In her earlier books the good usually triumphs over the bad but here the end result seems closer to defeat than to victory.

As usual with LeGuin there are a few excellent feminist observations, typically brief and integral to the plot.… (more)
LibraryThing member jen.e.moore
This definitely isn't one of Le Guin's great works, but it's a nice little slice of civil disobedience, a glance at ways in which you can change the world.
LibraryThing member nmele
The late Ursula K. Le Guin out to be a Nobel nominee in my opinion. I've never read a book of hers that didn't speak to me of profound and important things. In this novel, she imagines a confrontation between violence and nonviolence and she is realistic about the outcome but as the story proceeds, so do her explorations of what those terms mean and how they might apply to human behavior and relationships.… (more)
LibraryThing member wealhtheowwylfing
Victoria is an alien world, colonized through the blood and sweat of convicts and political dissidents. When the men of power push too far, a group dedicated to peace decides en masse to oppose them. A very interesting look at the good and bad aspects of pacifism as a way of life. I wish this was at least twice as long--the denoument felt rushed.… (more)
Fewer