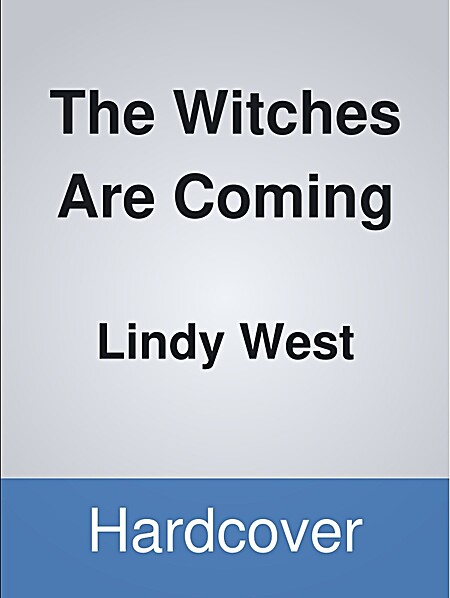 The Witches Are Coming

"This is a witch hunt. We're witches, and we're hunting you. From the moment powerful men started falling to the #MeToo movement, the lamentations began: this is feminism gone too far, this is injustice, this is a witch hunt. In The Witches Are Coming, firebrand author of the New York Times bestselling memoir and now critically acclaimed Hulu TV series Shrill, Lindy West, turns that refrain on its head. You think this is a witch hunt? Fine. You've got one. In a laugh-out-loud, incisive cultural critique, West extolls the world-changing magic of truth, urging readers to reckon with dark lies in the heart of the American mythos, and unpacking the complicated, and sometimes tragic, politics of not being a white man in the 21st century. She tracks the misogyny and propaganda hidden (or not so hidden) in the media she and her peers devoured growing up, a buffet of distortions, delusions, prejudice, and outright bullsh*t that has allowed white male mediocrity to maintain a death grip on American culture and politics -- and that delivered us to this precarious, disorienting moment in history. West writes, "We were just a hair's breadth from electing America's first female president to succeed America's first black president. We weren't done, but we were doing it. And then, true to form -- like the Balrog's whip catching Gandalf by his little gray bootie, like the husband in a Lifetime movie hissing, 'If I can't have you, no one can' -- white American voters shoved an incompetent, racist con-man into the White House." We cannot understand how we got here -- how the land of the free became Trump's America -- without examining the chasm between who we are and who we think we are, without fact-checking the stories we tell ourselves about ourselves and each other. The truth can transform us; there is witchcraft in it. Lindy West turns on the light."--provided by publisher.… (more)

LibraryThing member jmchshannon
I am not a fan of essay collections, but I always make an exception for Lindy West. It is as if she is inside my mind, knowing exactly how I am struggling in this era of Nazism and rampant racism. She gets the struggle and confirms that it is okay to feel such strong emotions. She also inspires, giving you the fuel to keep fighting the good fight. In this collection, she specifically uses the term witch hunt as a rallying cry, and I am here for it.… (more)
9 more
LibraryThing member froxgirl
Lindy West is a brilliant, sharp, snarky essayist. In Shrill, her first collection (which became a Hulu TV series), she shared the trufax about being a fat woman; in fact, she kind of liberated the word. But now the world is even darker, and here she quits Twitter, asks rhetorically if Adam Sandler is funny (um, only to men), destroys a Gwyneth Goop gathering, and details our enjoyment of HGTV comfort food. Another strong collection, half valid rage and half hilarious asides.

Quotes: "Every woman knows a version of Donald Trump, rape culture's blithering id. Ted Bundy was more charming than Donald Trump, and that boner pratfalled his way into becoming the most powerful man on earth."

"We kept letting Adam Sandler make more movies because white men are allowed to fail spectacularly and keep their jobs."

"Otherwise rational left wing people now feel warm things for George W. Bush because he paints pictures of kitties and shares his gumdrops with Michelle Obama and because a toilet demon is president now."

"Trump's endgame is to silo his supporters to the point that he is literally their only source."

"The social contract of the internet seems to insist that there's nobility in weathering degradation."

"As though white men's monopolistic death grip on power in the United States doesn't belie precisely the kind of "identity politics" they claim to abhor."

"Inaction IS a political stance."… (more)
LibraryThing member jmoncton
This book is really a set of essays that address some of the inequities in american society if you aren't male, white, and thin. Each is written with the irreverent humor that Lindy West is famous for, but the subject matter is much more serious. She addresses some of the tiny little micro aggressions that are present in every day life that gradually form every person's image and belief of what a successful person looks like in the US. And for sure, it's not female, fat, and a person of color.

This would be a great book to discuss with a group, especially a diverse group to see if everyone sees life the same way as Lindy West portrays it. There were times when I thought her observations were spot on, but there were times where I don't know if I agree with her.

Definitely food for thought and a good book to consume during the era of #MeToo.… (more)
LibraryThing member jillrhudy
I loved “Shrill” but honestly, much of “The Witches Are Coming” left me bewildered. The book, an essay collection, trades focus for frenetic cuteness and often wanders completely off course. I am only 14 years older than the author but found the writing completely inaccessible for a good fourth of the content.

I honor the author’s right to be strident and angry in her viewpoints (that’s the stuff I came for) and even to characterize conservatives as unmitigated monsters, but what she does owe to the reader is to be comprehensible—and not just to liberal feminist millennials who share a broad knowledge of 90s pop culture references. Incredibly and abruptly, West addresses a general audience toward the end (“no matter who you voted for”) as if anyone who voted for Donald Trump would ever still be reading at that point. I smiled and nodded a few times while reading but did not laugh once.

I appreciate many of the feminist arguments, for example: men should stand up and defend women from misogyny even at men’s cost, and it’s time women weren’t complicit in cloaking abortion in shame. Apparently West started the Twitter hashtag #ShoutYourAbortion. West always shines in cultural analysis on body image, and I admire her for quitting Twitter. The book needs a lot more polish. I read a prepub galley, so there’s still time for explaining what the heck she’s talking about and taking out the synopses of Adam Sandler movies.

I received an advance readers copy of this book from Hatchette and Netgalley in exchange for an honest review.… (more)
LibraryThing member ASKelmore
Best for:
People who want essays that critically explore politics and pop culture while making you laugh your ass off.

In a nutshell:
Author Lindy West follows up her Bestseller (and TV show!) Shrill with this book of essays exploring the Trump era, the Me Too movement, and many other aspects of political and pop culture.

Worth quoting:
“We need to start calling things by their real names: racism is racism, sexism is sexism, mistakes are mistakes, and they can be rectified if we do the work.”
“Watching otherwise rational human beings rhapsodize about [Ted] Bundy’s ‘charm’ and ‘brilliance’ while furrowing their brows over Elizabeth Warren’s dubious ‘likability’ creates a particularly American kind of whiplash.”
“Both sides, inasmuch as there are two ‘sides,’ are not equally stupid or equally bad. The notion that they are is human-extinction-level dangerous.”
“…if you are a person who is unable to access abortion for any reason, your state is total disenfranchisement and your right to life has been stripped from you.”

Why I chose it:
West is a fantastic author.

Review:
There’s something wonderful (dare I say magical?) about the way Lindy West writes. She can cut to the chase quickly while also providing hilarious analogies and examples to illustrate her points. She shares parts of herself that she doesn’t owe to anyone as a way to personalize stories. She takes a critical eye to things that maybe one has been thinking about and nails down the exact components one should be taking away from them. And she writes like a person might actually talk! Her asides are hilarious, and I can definitely picture her saying many parts of these essays in conversation with her friends.

The first essay of the book is the inspiration for the title - the US president’s insistence that he is the subject of a witch hunt. West explains why that is absurd, but turns the concept around, claiming that we are witches, and we are the ones doing the hunting. Hunting down horrible, dangerous political leaders, manipulative and rapey Hollywood figures, the patriarchy.

The essays range in topic from her love of the movie Clue, to a critical exploration of Adam Sandler’s films and what they say about what white men aspire to / get away with, abortion access, the ridiculousness of South Park’s ‘both sides are equally bad’ rhetoric, and so much more.

She even went to one of GOOP’s events!

I think my favorite is the one where she explains why she left Twitter. It sums up so much of what is deeply wrong with that social media platform (among others) while also acknowledging the ways it can be so important to different groups. I also enjoyed her takes on other pop culture folks I grew up exposed to, such as Adam Corolla and Joan Rivers - they were genuinely different and interesting to read.

I did not know this was coming out - I saw it mentioned in passing somewhere and immediately purchased it. There were only four copies available on Amazon UK, so I’m thinking maybe it doesn’t have a distributor here yet? Anyways, if you’re overseas, keep checking, and maybe ask your indie booksellers if they’re planning / able to carry it.

No One Is Too Small to Make a Difference by Greta Thunberg
So You Want to Talk About Race by Ijeoma Oluo
Hunger: A Memoir of (My) Body by Roxane Gay
Bad Feminist: Essays by Roxane Gay
This Will Be My Undoing: Living at the Intersection of Black, Female, and Feminist in (White) America by Morgan Jerkins
2 more
Know My Name: A Memoir by Chanel Miller
Men explain things to me by Rebecca Solnit
Fewer