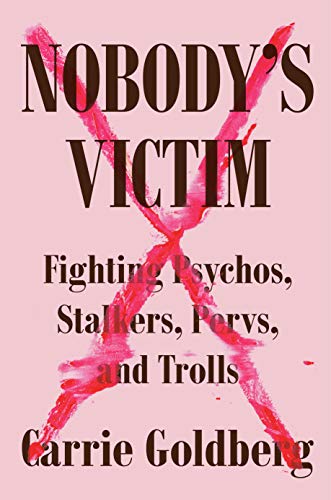 Nobody's Victim is an unflinching look at a hidden world most people don't know exists--one of stalking, blackmail, and sexual violence, online and off--and the incredible story of how one lawyer, determined to fight back, turned her own hell into a revolution.    "We are all a moment away from having our life overtaken by somebody hell-bent on our destruction." That grim reality--gleaned from personal experience and twenty years of trauma work--is a fundamental principle of Carrie Goldberg's cutting-edge victims' rights law firm.     Riveting and an essential timely conversation-starter, Nobody's Victim invites readers to join Carrie on the front lines of the war against sexual violence and privacy violations as she fights for revenge porn and sextortion laws, uncovers major Title IX violations, and sues the hell out of tech companies, schools, and powerful sexual predators. Her battleground is the courtroom; her crusade is to transform clients from victims into warriors. In gripping detail, Carrie shares the diabolical ways her clients are attacked and how she, through her unique combination of advocacy, badass relentlessness, risk-taking, and client-empowerment, pursues justice for them all. There are stories about a woman whose ex-boyfriend made fake bomb threats in her name and caused a national panic; a fifteen-year-old girl who was sexually assaulted on school grounds and then suspended when she reported the attack; and a man whose ex-boyfriend used a dating app to send more than 1,200 men to ex's home and work for sex. With breathtaking honesty, Carrie also shares her own shattering story about why she began her work and the uphill battle of building a business. While her clients are a diverse group--from every gender, sexual orientation, age, class, race, religion, occupation, and background--the offenders are not. They are highly predictable. In this book, Carrie offers a taxonomy of the four types of offenders she encounters most often at her firm: assholes, psychos, pervs, and trolls. "If we recognize the patterns of these perpetrators," she explains, "we know how to fight back."   Deeply personal yet achingly universal, Nobody's Victim is a bold and much-needed analysis of victim protection in the era of the Internet. This book is an urgent warning of a coming crisis, a predictor of imminent danger, and a weapon to take back control and protect ourselves--both online and off.… (more)

LibraryThing member shelleyraec
“My name is Carrie Goldberg and I’m a victims’ rights lawyer. Some people call me a “passionate advocate” or a “social justice warrior.” I’d rather be called a ruthless motherf*cker.”

This is how Carrie Goldberg introduces herself in the bold and utterly compelling Nobody’s Victim: Fighting Psychos, Stalkers, Pervs, and Trolls. Goldberg is a lawyer whose firm, C.A. Goldberg, PLLC, specialises in representing those who are targeted by offenders that use the internet to stalk, harass, intimidate, extort, or otherwise cause them harm.

Carrie has an intimate understanding of the issues her clients face, the inspiration for establishing her law firm came when she was victimised by an ex who tormented her for over a year with, among other things, a flood of hateful texts and emails, threats to post intimate pictures online, false allegations made on social media to friends and family, and a vexatious criminal charge. She was frustrated, frightened and near suicidal to discover the law could not protect her from his unreasonable rage.

While (US based) tech companies shield themselves from responsibility by exploiting a piece of legislation known as Section 230 of the CDA, the legal system moves too slowly to put adequate protections in place, and too many (white men) in power support the status quo, Carrie fights hard for the recognition of her clients rights to safety, privacy and dignity.

In sharing the stories of some of her clients, who include a thirteen year old girl who was excluded from attending school after reporting that she was raped by a fellow student, a young man whose ex used the Grindr app to send more than a thousand strangers to his door, a woman forced to go into hiding when she was doxed in a troll attack, and the five women who accused Weinstein of sex crimes, triggering the #metoo movement, Goldberg illustrates the grim failures of society to protect girls and boys, women and men, from the psycho’s, stalkers, pervs and trolls who target them, and leads the fight to protect them.

“There’s help if you need it and an army of warriors ready to stand by your side. You matter and you don’t have to fight this battle alone. You are nobody’s victim”

I would not hesitate to recommend Nobody’s Victim to everyone, this is a thought provoking, honest, and important expose of an injustice that demands attention and support to resolve.… (more)

Women's Rights in the USA: Policy Debates and Gender Roles by Dorothy E. McBride
The Witches Are Coming by Lindy West