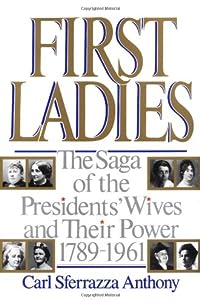 First Ladies: The Saga of the Presidents' Wives and Their Power (1)

In this previously untold story of a unique role and its evolving definitions, Carl Sferrazza Anthony has produced "an entirely new take on the first ladyship" and "an awesome work of scholarship" (Library Journal). Opening with a historic trip made in 1789 by Martha Washington from Mount Vernon to New York, then the capital city, First Ladies brings these women alive as never before in a saga of intertwining lives, friends, rivals, and allies. Among the women profiled in this first of a definitive two-volume history: Dolley Madison, Julia Tyler, Mary Lincoln, Julia Grant, Nellie Taft, Edith Wilson, Grace Coolidge, Eleanor Roosevelt, and Mamie Eisenhower. From the Federalist to the Antebellum periods, through the Gilded and Jazz ages, from the Great Depression to the Fabulous Fifties, thirty-four women confronted the towering events of American history. They also helped establish its course. We also glimpse the early years of the living First Ladies, from Jacqueline Kennedy to Barbara Bush.… (more)

LibraryThing member briandrewz
This was a gargantuan look at the lives of the First Ladies of the United States of America from 1789 to 1961. Covering the periods of Martha Washington through Mamie Eisenhower, Carl Sferrazza Anthony gives us a look into the lives of some of the most famous American women: the first ladies. As stated in the title of the book, the narrative focuses on the "power" these women held. Because of this, some first ladies are hardly touched on, as they held little sway over their husband's political decisions. Others, such as Martha Washington, Abigail Adams, Dolley Madison, Mary Lincoln, Edith Wilson, Eleanor Roosevelt, and Mamie Eisenhower, were given a much larger scope in the telling of their stories. It's a fascinating read.… (more)

First Ladies - From Martha Washington To Laura Bush, The Fascinating Lives Of The Women... Third Edition by Betty Boyd Caroli
Mrs. Ike: Memories and Reflections on the Life of Mamie Eisenhower by Susan Eisenhower
First Ladies by Margaret Truman
First Lady from Plains by Rosalynn Carter
America's Queen: The Life of Jacqueline Kennedy Onassis by Sarah Bradford
5 more
My Turn: The Memoirs of Nancy Reagan by Nancy Reagan
The Roosevelt Women: A Portrait In Five Generations by Betty Boyd Caroli
Alice: Alice Roosevelt Longworth, from White House Princess to Washington Power Broker by Stacy A. Cordery
Ladies of Liberty: The Women Who Shaped Our Nation by Cokie Roberts
Reflections: Life After the White House by Barbara Bush
Fewer