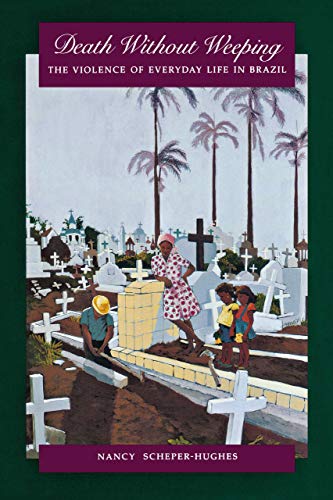 Death Without Weeping: The Violence of Everyday Life in Brazil

"When lives are dominated by hunger, what becomes of love? When people are assaulted by daily acts of violence and untimely death, what happens to trust? Set in the celebrated parched lands of Northeast Brazil, Death Without Weeping is a luminously written, "womanly hearted" account of the everyday experience of scarcity, sickness, and death that centers on the lives of the women and children of a hillside favela. These are the people who inhabit the underside of the once-optimistic Brazilian Economic Miracle and who are being left behind in the shaky transition to democracy." "Bringing her readers to the impoverished slopes above the modern plantation town of Bom Jesus da Mata, where she has worked on and off for twenty-five years, Scheper-Hughes follows three generations of shanty-town women as they struggle to survive through hard work, cunning, and triage. It is a story of class relations told at the most basic level of bodies, emotions, desires, and needs. Most disturbing - and controversial - is her finding that mother love, as conventionally understood, is something of a bourgeois myth, a luxury for those who can reasonably expect, as these women cannot, that their infants will live." "Death Without Weeping is a work of breadth and passion, a nontraditional ethnography charged with political commitment and moral vigor. It spirals outward, taking the reader from the wretched huts of the shantytown into the cane fields and the sugar refinery, the mayor's office and the legal chambers, the clinics and the hospitals, the police headquarters and the public morgue, and finally, the municipal grave-yard of Bom Jesus." "Ethnography and literary sensibility merge to capture the "mundane surrealism" of life in Bom Jesus da Mata. With resonances of such anthropological classics as the writings of Oscar Lewis, Death Without Weeping is a tour de force that will be discussed and debated for many years to come."--BOOK JACKET.… (more)