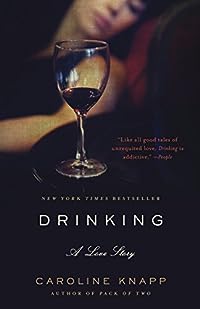 "It happened this way: I fell in love and then, because the love was ruining everything I cared about, I had to fall out." So begins Drinking: A Love Story, journalist Caroline Knapp's brave and powerful memoir of her twenty years as a functioning alcoholic. Knapp writes that she loved liquor the way she loved bad men and, like all tragic love stories, hers is a tale of seduction and betrayal, a testament to the alluring but ultimately destructive powers of addiction.Fifteen million Americans a year are afflicted with the disease of alcoholism. Five million of them are women. Caroline Knapp, for example, started drinking at age fourteen. She drank through her years at an Ivy League college, through an award-winning career as a lifestyle editor and columnist. Publicly she was a dutiful daughter, attentive friend, sophisticated professional. Privately she was drinking herself into oblivion, trapped in love relationships that continued to undermine her self-esteem - until a series of personal crises forced her to confront and ultimately break free of the "liquid armor" she'd used to shield herself from the complicated battles of growing up. Caroline Knapp's ruthless self-examination, moral courage, and singular ability as a writer inform this remarkable memoir with many new insights about alcoholism, but more important, with many profound insights about life.… (more)

LibraryThing member karieh
“Drinking: A Love Story” – even the title is compelling. And the first line – “It happened this way: I fell in love and then, because the love was ruining everything I cared about, I had to fall out.” And the love to which she is referring is, of course, with alcohol.

And she’s right…although I never thought about alcoholism that way before. There are many similarities between this love and the love for someone who seems perfect at first but turns out to be life changing in the most destructive ways.

“I loved the way drink made me feel, and I loved its special power of deflection; its ability to shift my focus away from my own awareness of self and onto something else, something less painful than my own feeling. I loved the sounds of drink: the slide of a cork as it eased out of a wine bottle, the distinct glug-glug of booze pouring into a glass, the clatter of ice cubes in a tumbler. I loved the rituals, the camaraderie of drinking with others, the warming, melting feelings of ease and courage it gave me.”

Caroline Knapp is painfully honest as she tells her story, seemingly holding nothing back as she tells the reader about her theories on her own alcoholism, about the factors in her life, physical, emotional and circumstantial that may have contributed to this deadly love. While I am very fortunate to not share that love, I sympathized with her many times as she described her life.

“Growing up, I never heard my parents say “I love you,” not to us and not to each other. I never heard them fight either. That’s something else.”

I must have read that line a dozen times in disbelief. While she never describes any physical abuse, the idea that a child grows up not hearing “I love you” several times a day from their parent just breaks my heart.

I once worked with a man who was a recovering alcoholic, and I remember him asking me if I was able to have just one drink at a sitting. I told him I was, that sometimes that drink would go unfinished. He shook his head and told me that he couldn’t imagine taking a first sip of a drink and then not ending up blacking out at the end of an evening. So this section resonated with me.

“My mother didn’t drink that way. Neither did my sister. They’d have a glass of wine at dinner – a single glass – and if you tried to pour more, they’d cover the glass with a hand and say, “No, thanks. I’ve had enough”. Enough? That’s a foreign word to an alcoholic, absolutely unknown. There is never enough, no such thing.”

That thought is chilling to me – that once the drinking starts – it never stops.

The description of the elaborate planning that goes into being a “high functioning alcoholic” (as Knapp describes herself) seemed exhausting to me. Visiting different liquor stores each day, making up parties and events to explain the volume of the purchases, hiding booze in closets and plants. Though much of Knapp’s story comes through in the carefully strengthening voice of someone who has lived through a nightmare and is carefully rebuilding, sometimes she is able to look at her past life with humor.

“Recycling is a problem to the active alcoholic: you have to see all those bottles, heaped together in the recycling bin, and that can be a disconcerting image. Luckily, I did most of my solitary, alcoholic drinking in communities that didn’t then recycle, so I’d pile the bottles into a heavy plastic garbage bag and lug them out to the curb or heave them into a Dumpster, hoping no one nearby heard all the glass clinking and rattling as I went along.”

Caroline Knapp’s story is a compelling one, a look at the destruction that the love of drink can have on a life, on several lives as she talks to people she meets in AA, on a country as she gives chilling statistics and facts. And it’s a story that doesn’t have a happy ending.

As the book comes to a close, she is still sober, but she is the first to admit that the odds are against her and that it is a daily, hourly fight to stay that way.

“I once heard a woman say that as an alcoholic, a part of her will always be deeply attracted to alcohol, which seemed a very simple way of putting it, and very true. The attraction – the pull, the hunger, the yearning – doesn’t die when you say goodbye to the drink, any more than the pull toward a bad lover dies when you finally walk out the door.”

Parched : a memoir by Heather King
The year of magical thinking by Joan Didion
Girl, interrupted by Susanna Kaysen