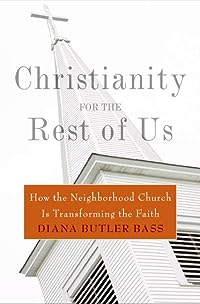 Christianity for the Rest of Us: How the Neighborhood Church Is Transforming the Faith

For decades the accepted wisdom has been that America's mainline Protestant churches are in decline, eclipsed by evangelical mega-churches. Church and religion expert Diana Butler Bass wondered if this was true, and this book is the result of her extensive, three-year study of centrist and progressive churches across the country. Her surprising findings reveal just the opposite--that many of the churches are flourishing, and they are doing so without resorting to mimicking the mega-church, evangelical style. Christianity for the Rest of Us describes this phenomenon and offers a how-to approach for Protestants eager to remain faithful to their tradition while becoming a vital spiritual community. As Butler Bass delved into the rich spiritual life of various Episcopal, United Methodist, Disciples of Christ, Presbyterian, United Church of Christ, and Lutheran churches, certain consistent practices--such as hospitality, contemplation, diversity, justice, discernment, and worship--emerged as core expressions of congregations seeking to rediscover authentic Christian faith and witness today. This hopeful book, which includes a study guide for groups and individuals, reveals the practical steps that leaders and laypeople alike are taking to proclaim an alternative message about an emerging Christianity that strives for greater spiritual depth and proactively engages the needs of the world.… (more)

The Heart of Christianity: Rediscovering a Life of Faith by Marcus J. Borg
The Practicing Congregation: Imagining a New Old Church by Diana Butler Bass
The Purpose Driven Church: Every Church Is Big in God's Eyes by Rick Warren
Christianity After Religion: The End of Church and the Birth of a New Spiritual Awakening by Diana Butler Bass
Leaving Church: A Memoir of Faith by Barbara Brown Taylor
20 more
Simple Church: Returning to God's Process for Making Disciples by Thom S. Rainer
A Generous Orthodoxy: Why I Am a Missional, Evangelical, Post/Protestant, Liberal/Conservative, Mystical/Poetic, Biblical, Charismatic/Contemplative, Fundamentalist/Calvinist, Anabaptist/Anglican, Methodist, Catholic, Green, Incarnational, Depressed-yet-Hopeful, Emergent, Unfinished CHRISTIAN by Brian D. McLaren
The Master Plan of Evangelism 1964 by Robert E. Coleman
Amazing Grace: A Vocabulary of Faith by Kathleen Norris
The Wounded Healer - Ministry In Contemporary Society, Text Complete and Unabridged by Henri J. M. Nouwen
From Nomads to Pilgrims: Stories from Practicing Congregations by Diana Butler Bass
Take This Bread: A Radical Conversion by Sara Miles
Life Together: The Classic Exploration of Christian in Community by Dietrich Bonhoeffer
Speaking of Sin by Barbara Brown Taylor
A People's History of Christianity: The Other Side of the Story by Diana Butler Bass
An Altar in the World: A Geography of Faith by Barbara Brown Taylor
Practicing Our Faith: A Way of Life for a Searching People by Dorothy C. Bass
The God We Never Knew: Beyond Dogmatic Religion to a More Authentic Contemporary Faith by Marcus J. Borg
Brothers, We Are Not Professionals: A Plea to Pastors for Radical Ministry by John Piper
Radical Welcome: Embracing God, the Other, and the Spirit of Transformation by Stephanie Spellers
Soul Feast : An Invitation to the Christian Spiritual Life by Marjorie J. Thompson
Home By Another Way by Barbara Brown Taylor
The Preaching Life (Dan Josselyn Memorial Publication (Paperback)) by Barbara Brown Taylor
Revolution in World Missions by K P Yohannan
Holy Listening: The Art of Spiritual Direction by Margaret Guenther
Fewer

LibraryThing member auntieknickers
This was an inspiring and heartening book for a mainline church member. Bass visited numerous congregations and describes the many ways in which some churches are experiencing renewed vitality in worship, study, and service. A useful corrective to the "sky is falling" school of reporting on
Show More
American Protestant churches.
Show Less
3 more
LibraryThing member sheyduck
Excellent book- one of the best I've ever read
LibraryThing member elenaj
This book has some worthwhile insights, and will be useful for my congregation to consider. However, there were some aspects of the book that rubbed me the wrong way. It is very much a white church book, speaking to white church people. Yes, some of the churches discussed have racial diversity, but
Show More
the author spent much more time discussing political diversity than racial diversity.

Her approach to political diversity was very centrist, a sort of "good church people can be either Republican or Democratic" view - and, in the end, leans toward advocating a political centrism that I find empty and spineless. I agree with her that linking Christian faithfulness to a party platform is wrongheaded, but centrism is not the better way.

And finally, there is an offhanded comment midway through the book where she derisively mentions an Episcopal priest who brought some kind of paganism or earth spirituality into his congregation. I found her dismissal of that as obviously too far - openness run amuck - to be evidence of her own shallowness and prejudice.

That casual dismissal runs alongside wholehearted praise of all of her study congregations - she doesn't mention any of those churches' flaws or dysfunctions. I'm sure that approach makes it easier to find churches to study - knowing that if you invite her in, she'll only say nice things and tell you how cool your church is. But it leaves me feeling a bit deceived - especially since I've heard that one of her ideal "purple" churches is actually totally run by the Republicans in the congregational leadership, and attempts to squash organizing by the liberals in the church.
Show Less
LibraryThing member ALincolnNut
Polls and church membership lists have shown a similar trend for decades: the so-called mainline Protestant churches in the United States are declining. In roughly the last thirty years, conservative and evangelical churches have been growing rapidly. Dorothy Butler Bass goes in search of mainline
Show More
churches that are defying this trend, and growing in their own neighborhoods. This book represents her summary of the paths they are taking.

In particular, Butler Bass writes about twelve specific faith practices that growing mainline churches have embraced. Many of them seem to be rediscoveries of ancient spiritual disciplines, like contemplation. Others are more modern, like diversity and justice.

Despite the books self-described scope, Butler Bass offers a very anecdotal finished product. While her work suggests that she was working as a type of religious anthropologist, the book lacks the context that such studies need to be comprehensible. Without this context, this book is mostly a collection of anecdotes.

In fairness, Butler Bass intends this book for interested church-goers looking for a mainline alternative to conservative churches. Perhaps the lack of context is an attempt to tell stories that will create insight and stimulate discussion in churches without offering too much confusing information. However, while the research interested me, I found the book rather disappointing without such context.

To be sure, there is value here for mainline churches and their members -- ideas for renewal that don't involve audio visual equipment or TV advertising. The spiritual disciplines mentioned would be good guides for congregations looking to grow in their lives of faith. But more context would make these sections even better.
Show Less
Fewer