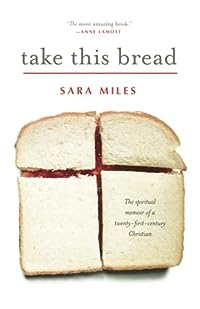 Take This Bread: A Radical Conversion

Raised as an atheist, Sara Miles lived an enthusiastically secular life. Then early one morning, for no earthly reason, she wandered into a church. "I was certainly not interested in becoming a Christian," she writes, "or, as I thought of it rather less politely, a religious nut." But she ate a piece of bread, took a sip of wine, and found herself radically transformed. The sacrament of communion has sustained Miles ever since, in a faith she'd scorned, in work she'd never imagined. Here she tells how the seeds of her conversion were sown, and what her life has been like since she took that bread: as a lesbian left-wing journalist, religion for her was not about angels or good behavior or piety. She writes about the economy of hunger and the ugly politics of food; the meaning of prayer and the physicality of faith. Here, in this passionate book, is the living communion of Christ.--From publisher description.… (more)

Jesus Freak: Feeding Healing Raising the Dead by Sara Miles
Leaving Church: A Memoir of Faith by Barbara Brown Taylor
City of God: Faith in the Streets by Sara Miles
Practicing Resurrection: A Memoir of Work, Doubt, Discernment, and Moments of Grace by Nora Gallagher
Girl Meets God: A Memoir by Lauren F. Winner
13 more
Things Seen and Unseen: A Year Lived in Faith by Nora Gallagher
An Altar in the World: A Geography of Faith by Barbara Brown Taylor
Still: Notes on a Mid-Faith Crisis by Lauren F. Winner
Christianity for the Rest of Us: How the Neighborhood Church Is Transforming the Faith by Diana Butler Bass
Christianity After Religion: The End of Church and the Birth of a New Spiritual Awakening by Diana Butler Bass
Amazing Grace: A Vocabulary of Faith by Kathleen Norris
The Heart of Christianity: Rediscovering a Life of Faith by Marcus J. Borg
Traveling Mercies: Some Thoughts on Faith by Anne Lamott
Learning to Walk in the Dark by Barbara Brown Taylor
The Cross and the Lynching Tree by James H. Cone
The Cloister Walk by Kathleen Norris
The Preaching Life (Dan Josselyn Memorial Publication (Paperback)) by Barbara Brown Taylor
The God We Never Knew: Beyond Dogmatic Religion to a More Authentic Contemporary Faith by Marcus J. Borg
Fewer

LibraryThing member MarthaHuntley
A profoundly Christian book, the description of receiving Christ in communion leading to a changed life that changes other lives, I found to be riveting and moving. Maybe the best description I've ever read of what Communion is or can be.
11 more
LibraryThing member morningrob
An interesting book though difficult to pinpoint what kind of book it is. Part memoir, part theology, part social analysis- this book can engage the reader on a number of levels. Therefore, what a person might find interesting in this book is determined by their own social location. For example, a
Show More
person who is finds the various liberal/conservative controversies interesting would find her take on this issue to be most important. Same for poverty issues and theological analysis.
Show Less
LibraryThing member debnance
This is certain to be one of my favorite reads of the year. Sara Miles is a woman who has never visited a church in her life, whose parents are acknowledged atheists. Yet, suddenly and unexpectedly, Miles eats a bite of the Lord’s Supper and becomes a Christian. Her life completely changes and
Show More
she becomes the founder of a food bank at her church. The food bank brings in the poor, the desolate, the sick, the crazed, and these, in turn, become changed and, in addition, act to change those in the church. Delightful.
Show Less
LibraryThing member KeithAkers
Yes, there IS such a thing as liberal Christianity! Thanks! She's not vegetarian, though, and doesn't seem to have any consciousness of this issue.
LibraryThing member nmele
Sara Miles wrote a book that speaks to the graces and insights I have received during the years of my involvement in feeding hungry people in a different context from hers. This book is Miles's story of her discovery of what it means to be Christ for others and see Christ in others. I am deeply
Show More
moved by her stories and reflections, by her concrete experience of the body of Christ, blessed and broken.
Show Less
LibraryThing member nancyewhite
An unlikely Christian (lesbian, single mother, political radical, atheist) has a dramatic conversion experience when she walks into an Episcopal church out of reporter's curiousity, takes communion and finds her soul completely overwhelmed. Soon enough, she has a vision of a truly open table that
Show More
serves food to all and convinces her parish to allow her to open a food pantry which turns away no one. This memoir describes the religious, spiritual, financial and tangible challenges she faced as well as her conviction that doing something useful (feeding people in her case) is communion. Her tone is often irreverant in a traditional sense, observing at her pantry "Jesus didn't have to deal with the f***ing Russians" for example but is never irreverant in the deeper sense. Her story could be read by many Christians engaged in long discussions about "right" and "wrong" and process as a useful reminder of Jesus's radical ministry of loving the outcast and his call to "feed my sheep". This memoir, in the end, is about how one unlikely person found a way to create Beloved Community with other unlikely people in a very real way.
Show Less
LibraryThing member jandm
A fascinating and thought-provoking account of Sara Miles' journey to Christ, mediated through food, feeding, and the Eucharist. If ever someone was pre-disposed to ignore Jesus and his church, it was Miles, with a devoutly atheistic upbringing, complicated sexuality and relationships, and knowing
Show More
know Christians. But God drew her to himself, and her faith found expression in the most direct way, following Jesus' command to the disciples to "feed my sheep", starting nine food pantries around poor neighbourhoods of San Francisco.

As a journalist for many years, she writes beautifully, weaving her many experiences together. Through them you can see God moving to draw her to him, and then draw her deeper into a discipleship often with cost.

Recommended for anyone interested in the spiritual life, including to those sensing a call from God to new vocations.
Show Less
LibraryThing member bness2
I just loved this book. Sara Miles describes an approach to church that is very refreshing. Connecting food and eating with he Gospel is so much what Jesus Himself seemed to be about. He ate with the roughest elements of his society, no one was excluded from His table and the food was free. I have
Show More
always felt that the church needs to be much more inclusive. Where a lesbian, worldly, atheist can find God, we need more places like that, more churches that make such people feel welcome.
Show Less
LibraryThing member greeniezona
This is the story of unlikely conversion: A radical lesbian activist, who spend much of her youth involved in people's uprisings in Mexico & Central America, one day walks into a church, receives communion, and is transformed. She becomes filled with the idea of "sharing the body," which for her
Show More
becomes a command to feed the people. Which leads her to setting up a weekly food bank in the church, and then to helping others in the city start new food banks as well, challenging her congregation, those in her neighborhood, and even those who visit the food bank to expand their ideas of community, service, and comfort.

What I appreciated most about this book was the author's meditations on what it means to "be the body of Christ," and sharing in that call with those whose religious beliefs differed significantly from hers. (And vice versa!) It's a thought that I've been mulling over all summer, and it's helping me be less reticent expressing my beliefs around those with more conservative views (Pretty much everyone.)
Show Less
LibraryThing member Skybalon
Couldn't finish this. I think that everyone's spiritual journey has unique elements, but sometimes people maybe overgeneralize their experience into everyone's life lessons.
LibraryThing member DrFuriosa
A powerful look at what it means to accept the body of Christ in our churches and in our lives.
LibraryThing member DubiousDisciple
Inspiring, honest, and deeply moving, by the end of Sara's story you'll love this lesbian, left-wing atheist as much as any of the other Christians of God's flock. It's hard to remember a book I enjoyed more.

On a whim one day, Sara walked into a church, ate a bit of bread, sipped a bit of wine, and
Show More
underwent "a radical conversion." While never overcoming her skepticism about God, she nevertheless embraced the church ... but the Christianity she embraced had no use for angels or worship or dreams of eternity. It quickly came to mean real concern about real people. Take This Bread is about real hunger, and Sara's struggles to establish a food pantry to care for the poor, elderly, sick, deranged, and marginalized of San Francisco.

Both light-hearted and deeply meaningful, this is a book that will toy with the full range of your emotions.
Show Less
Fewer