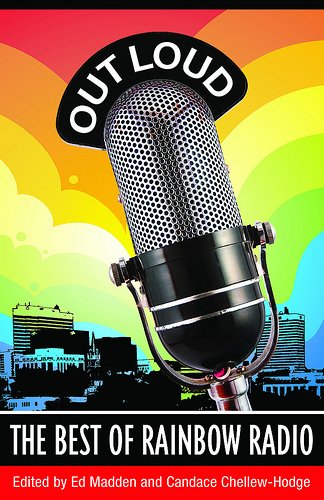 Out Loud: The Best of Rainbow Radio

From a small radio studio in the heart of the Deep South, the voices of gay and lesbian Southerners suddenly filled the AM airwaves. "For far too long," the announcer stated, "talk radio airwaves have been dominated by the people who talk about us. Starting this fall, we speak for ourselves!" What began as an experiment--Rainbow Radio, South Carolina's first gay and lesbian radio show--has grown into a grassroots-driven community radio show that, since 2005, has offered diverse, accurate, and often unparalleled stories of gay and lesbian Southerners, their families and their friends.Citadel cadets and drag queens, a slam poet from Columbia and a Spartanburg schoolteacher, a seminary student in Atlanta and a gay Army vet just back from the Middle East, West Columbia rednecks and rural Texas tomboys, as well as South Carolina's first lesbian Congressional candidate. A young man talking about his gay uncle and a retired attorney talking about her gay son. Two boys who dare to dance at the prom, a psychic who may be attuned to the gay agenda, and a dying man who makes his last visit to church on Christmas.These voices have now been collected in a book, Out Loud: The Best of Rainbow Radio, edited by Ed Madden and Candace Chellew-Hodge. Their stories will inspire you, enrage you, and transform the way you think about what it means to be gay and lesbian in the South.… (more)

Now That I'm Out, What Do I Do?: Thoughts on Living Deliberately by Brian McNaught
A Queer Geography: Journeys Toward a Sexual Self by Frank Browning
Growing Up Gay in the South: Race, Gender, and Journeys of the Spirit (Haworth Gay & Lesbian Studies) by James T Sears
Familiar Faces Hidden Lives: The Story Of Homosexual Men In America Today by Howard Brown
THE GAY WORLD OF KENNETH MARLOWE by Kenneth Marlowe
14 more
Carryin' On in the Lesbian and Gay South by John Howard
GIRLS NEXT DOOR: Into the Heart of Lesbian America by Lindsy Van Gelder
The last deployment : how a gay, hammer-swinging twentysomething survived a year in Iraq by Bronson Lemer
Lonely Hunters: An Oral History Of Lesbian And Gay Southern Life, 1948-1968 by James T Sears
Sing Out: Gays and Lesbians in the Music by Boze Hadleigh
Setting Them Straight: You CAN Do Something About Bigotry and Homophobia in Your Life by Betty Berzon
Life Outside - The Signorile Report on Gay Men: Sex, Drugs, Muscles, and the Passages of Life by Michelangelo Signorile
The Columbia Anthology of Gay Literature by Byrne R. S. Fone
From Boys to Men: Gay Men Write About Growing Up by Ted Gideonse
The Gay Book of Days by Martin Greif
The deformity lover and other poems by Felice Picano
Gay and Lesbian Youth (Journal of Homosexuality Series) by Gilbert Herdt
Secrets of a Gay Marine Porn Star by Rich Merritt
Man to Man: Gay Couples in America by Charles Silverstein
Fewer