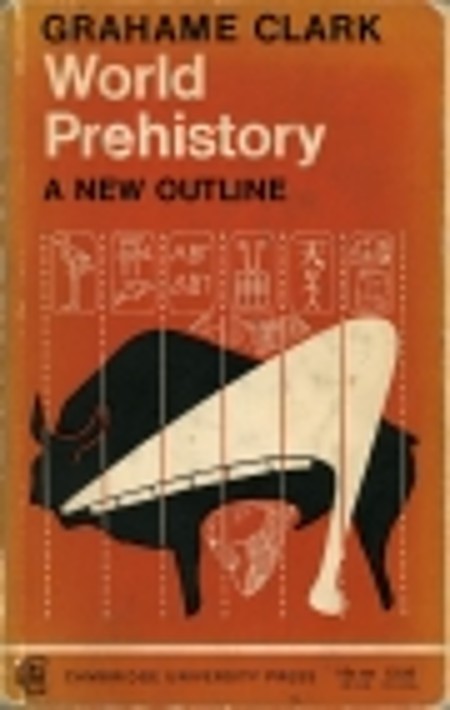 'To qualify as human, a hominid has, so to say, to justify himself by works: the criteria are no longer biological so much as cultural'. In this 1977 book, Professor Grahame Clark goes on to trace the origins and development of human culture, in all its diversity, throughout the world. He follows the intellectual, material and social progress of mankind in each major region, from the earliest stone industries of two million years ago to the gradual and still incomplete attainment of literacy over the last five thousand years. He takes full account of peoples still preliterate when encountered in recent times by anthropologists as well as of those which nourished the great historic civilizations of mankind. Throughout he emphasizes the close relationship between environment and the character and speed of cultural development. The narrative is generously illustrated with photographs, drawings and maps, and there is a carefully selected list of references to the main sources used.… (more)

Before civilization: the radiocarbon revolution and prehistoric Europe by Colin Renfrew
Europe before Rome : a site-by-site tour of the stone, bronze, and iron ages by T. Douglas Price
People of the earth : an introduction to world prehistory by Brian M. Fagan
What happened in history, by V. Gordon Childe, (Vere Gordon), 1892-1957
The atlas of early man by Jacquetta Hopkins Hawkes, 1910-
21 more
The dawn of European civilization. by V. Gordon Childe, (Vere Gordon), 1892-1957
Archaeology and Society: Reconstructing the Prehistoric Past (Routledge Library Editions: Archaeology) by Grahame Clark
Prehistoric societies by Grahame Clark, 1907-
Ancient Europe from the beginnings of agriculture to classical antiquity; a survey. by Stuart Piggott
An introduction to prehistoric archeology by Frank Hole
Man makes himself, by V. Gordon Childe, (Vere Gordon), 1892-1957
Man the tool-maker by Kenneth Page Oakley, 1911-
British prehistory: A new outline by Colin Renfrew
Everyday life in prehistoric times, by Marjorie Quennell
Archaeology from the earth. by Robert Eric Mortimer Wheeler, Sir, 1890-
A guide to prehistoric England by Nicholas Thomas
Prehistory and the beginnings of civilization, by Jacquetta Hopkins Hawkes, 1910-
Prehistoric stone circles by Aubrey Burl
World prehistory : a brief introduction by Brian M. Fagan
After the Ice: A Global Human History 20,000-5000 BC by Steven Mithen
The stone age hunters by Grahame Clark, 1907-
Method and Theory in American Archaeology (Classics Southeast Archaeology) by Gordon R. Willey
Prehistory; an introduction by Derek Arthur Roe
The Cambridge encyclopedia of archaeology by Andrew Sherratt
How ancient Europeans saw the world : vision, patterns, and the shaping of the mind in prehistoric times by Peter S. Wells
In pursuit of the past : decoding the archaeological record by Lewis Roberts Binford, 1930-
Fewer