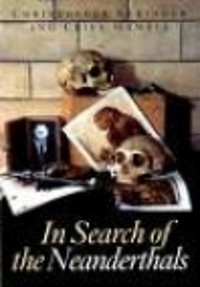 In search of the Neanderthals : solving the puzzle of human origins

"Ever since the discovery of the bones of a pre-modern human in the Neander Valley, Germany, in 1856, the Neanderthals have provoked controversy. Who were these beetle-browed, heavy-limbed creatures, and how were they related to modern people? What caused their disappearance 35,000 years ago? Portrayed in endless cartoons and novels as club-wielding cavemen, the Neanderthals have become the archetype of all that is primitive and uncultured." "Today Neanderthal specialists are locked in one of the fiercest debates in modern science. One side, the "multiregional" school, argues that the Neanderthals and their contemporaries elsewhere evolved semi-independently into modern humans. The other side, the "out of Africa" school, believes that the Neanderthals were an evolutionary dead end, replaced by fully modern people coming ultimately from Africa. The latter camp, now gaining the upper hand, is led by Christopher Stringer. Here, in this long-awaited volume, he sets out his views for the first time, in conjunction with the archaeologist Clive Gamble." "Step by step the authors put their case. The Neanderthals had an anatomy crucially different from our own, adapted to the cold of Ice Age Europe. Neanderthal behavior, captured in the archaeological record, similarly points to fundamental differences. New genetic evidence strongly suggests a single origin for modern humans in Africa." "What, then, was the fate of the Neanderthals? Stringer and Gamble argue that, capable and intelligent as they were, they eventually proved no match for the better-organized, better-equipped newcomers. They did not evolve into modern humans: they simply died out." "This important study, incorporating a photographic catalogue of key fossil finds, provides the most up-to-date account of current knowledge about the Neanderthals and their world. For anthropologists, archaeologists, ecologists, evolutionary biologists, palaeontologists - for anyone interested in where we came from - it is essential reading."--BOOK JACKET.Title Summary field provided by Blackwell North America, Inc. All Rights Reserved… (more)

Making silent stones speak : human evolution and the dawn of technology by Kathy Diane Schick
Lucy, the beginnings of humankind by Donald C. Johanson
The Neandertal enigma : solving the mystery of modern human origins by James Shreeve
The man in the ice : the discovery of a 5,000-year-old body reveals the secrets of the stone age by Konrad Spindler, 1939-
Bones of contention : controversies in the search for human origins by Roger Lewin
14 more
Cro-Magnon : how the Ice Age gave birth to the first modern humans by Brian M. Fagan
The complete world of human evolution by Chris Stringer, 1947-
The Neanderthals rediscovered : how modern science is rewriting their history by Dimitra Papagianni
Ancestors : in search of human origins by Donald C. Johanson
The Lost Civilizations of the Stone Age by Richard Rudgley
The great human diasporas : the history of diversity and evolution by L. L. (Luigi Luca) Cavalli-Sforza, 1922-
Exploring Native North America by David Hurst Thomas
People of the earth : an introduction to world prehistory by Brian M. Fagan
Mapping human history : discovering the past through our genes by Steve Olson
Before civilization: the radiocarbon revolution and prehistoric Europe by Colin Renfrew
The mind in the cave : consciousness and the origins of art by J. David Lewis-Williams
Neanderthal : neanderthal man and the story of human origins by Paul Jordan
After the Ice: A Global Human History 20,000-5000 BC by Steven Mithen
The great journey : the peopling of ancient America by Brian M. Fagan
Fewer