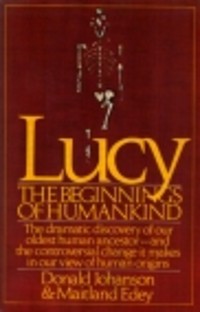 Lucy, the beginnings of humankind

"A glorious success...The science manages to be as exciting and spellbinding as the juiciest gossip" (San Franscisco Chronicle) in the story of the discovery of "Lucy"--the oldest, best-preserved skeleton of any erect-walking human ancestor ever found. When Donald Johanson found a partical skeleton, approximately 3.5 million years old, in a remote region of Ethiopia in 1974, a headline-making controversy was launched that continues on today. Bursting with all the suspense and intrigue of a fast paced adventure novel, here is Johanson's lively account of the extraordinary discovery of "Lucy." By expounding the controversial change Lucy makes in our view of human origins, Johanson provides a vivid, behind-the-scenes account of the history of pealeoanthropology and the colorful, eccentric characters who were and are a part of it. Never before have the mystery and intricacy of our origins been so clearly and compellingly explained as in this astonighing and dramatic book.… (more)

LibraryThing member keylawk
Lucy walked upright, but her shoulders resembled the chimpanzee. It becomes obvious that brachiating ambulation "teaches" the hand to form an opposed thumb. In turn, the development of bipedalism then freed the hand to carry the branch -- now club and spear -- which had previously carried the creature.
3 more
LibraryThing member LydiaHD
I read this at least a decade ago - probably closer to 20 years ago - and I don't remember much of the information in it, but I do remember really, really enjoying reading it.
LibraryThing member unclebob53703
This is the best book on the subject of early humans that I've ever read. First rate background information, then it takes off like a great detective story! Was recently able to find this signed copy on Abe Books.
LibraryThing member leesclubhaarenjb
very well written; page turner. Got it from a friend who owned two copies; finished it the nexth day.
Fewer

Ancestors : in search of human origins by Donald C. Johanson
Bones of contention : controversies in the search for human origins by Roger Lewin
The Neandertal enigma : solving the mystery of modern human origins by James Shreeve
People of the lake : mankind and its beginnings by Richard E. Leakey
The emergence of man by John E. Pfeiffer
5 more
In search of the Neanderthals : solving the puzzle of human origins by Chris Stringer
Making silent stones speak : human evolution and the dawn of technology by Kathy Diane Schick
Humankind emerging by Bernard Grant Campbell
In the age of mankind : a Smithsonian book of human evolution by Roger Lewin
The search for Eve by Michael Harold Brown
Fewer