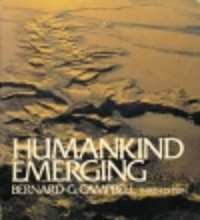 The most comprehensive, up-to-date, and readable introduction to the field of human evolution. The ninth edition of Humankind Emerging tells the story of how, when, and why the human lineage developed from ape-grade ancestors. In Part I, Chapters 1 and 2 present a short history of the rise of evolutionary theory and the science of genetics, followed by a description of the various mechanisms that produce evolutionary change. In Part II, Chapters 3-5put humans in their proper context among the primates, first discussing those aspects of modern primate behavior that help to interpret human prehistory and then describing the fossil evidence for the early stages of primate evolution.  In Part III,Chapters 6 and 7 describe the australopiths-members of the subtribe Australopithecina and the first representatives of humans' zoological tribe, Hominini.  Part IV consists of nine chapters that detail the anatomical, cognitive, and behavioral evolution of the genus Homo and its various premodern and modern species.  Here the second hominin subdivision-the subtribe Hominina-is described and interpreted. The book ends with Part V in which Chapter 17 discusses modern human diversity, the question of biological races of humans, and the challenges facing humanity in the future. The current edition provides an absolutely up-to-date survey of the hominin fossil species including descriptions of the oldest members of the tribe-Sahelanthropus, Orrorin, and Ardipithecus kadabba (Chapters 6 and 7)-as well as the recently discovered dwarfed species from Indonesia, Homo floresiensis (expanded post-script in Chapter 15).  Updates of the taxonomic scheme for the human lineage bring the text into agreement with current paleoanthropological usage.  Australopiths are assigned to the subtribe Australopithecina, species of the genus Homo are placed in the subtribe Hominina, and the two subtribes are combined to form the tribe Hominini.  Great apes and hominins now are combined in the family Hominidae.  The newest edition also expands the fossil and behavioral descriptions of Homo heidelbergensis and identifies this species as the first hominin type to show the "hunting lifestyle."  Speculations about societal changes that may have accompanied the beginning of the hunting way of life (Chapter 12) are updated.  The latest studies of the neural regions and connections responsible for human speech and language (Chapter 13) are described as well.  In-text citations for all source materials are provides as well as a full bibliography-features that allow for in-depth study.  Over 30% of the references are from 2000 or later.… (more)

Female figures. Many small sculptures have been found, mostly from Upper Perigordian period across a wide area from Asia to Europe, from 25,000 to 20,000 years ago when it was extremely cold in
Show More
those areas. These artifacts include the heads of animals. But the most common figures found are the human females -- the "Venus" bodies. The book makes these points:

>> The Venuses outnumber all other sculptures.

>> Unlike the animal forms/heads, these are not "naturalistic" depictions; they are highly abstracted and artistic, even surreal.

>> Unlike the animals, which are often heads only, the Venus emphasizes the body, and the female characteristics of the body--often with greatly exaggerated breasts and buttocks, often gravid.

>> There are almost no male figures. No kings, no warriors.

>> Unlike the cave art, the Venus figures are not just found in uninhabited caves. They are often found along the main wall or under the hearth of a dwelling. This indicates use in daily life.

>> They appear as people begin to establish "homes" or permanent settlements. The home becomes important and it is regarded as the prerogative of the female. [312]

>> During this period, in some areas, the population increased by unprecedented amounts, some as much as ten times.

By 10,000 BC, Cro-Magnon peoples had "set the stage for the last steps in the emergence of humankind: agriculture, domestication of animals, metalworking, complex forms of social and political life, writing, and perhaps even war." [415]

Curiously, there is no evidence of war until the making of Venuses had completely stopped.
Show Less
1 more
LibraryThing member killermuffin
This book provided most of the information I needed to get a good grade in the Physical Anthropology couse I took. It's been a useful resource after the class, for whatever reason. Like many science textbooks, the prose is dry and difficult to read even with an interest in the subject. I did like
Show More
the suggested readings and internet links at the end of every chapter.
Show Less
Fewer

In search of the Neanderthals : solving the puzzle of human origins by Chris Stringer
Bones of contention : controversies in the search for human origins by Roger Lewin
The emergence of man by John E. Pfeiffer
Making silent stones speak : human evolution and the dawn of technology by Kathy Diane Schick
Lucy, the beginnings of humankind by Donald C. Johanson
9 more
Patterns in prehistory : humankind's first three million years by Robert J. Wenke
Archaeology : a brief introduction by Brian M. Fagan
The stone age hunters by Grahame Clark, 1907-
People of the earth : an introduction to world prehistory by Brian M. Fagan
Ancestors : in search of human origins by Donald C. Johanson
Physical anthropology and archeology by Clifford J. Jolly
The search for Eve by Michael Harold Brown
The Neandertal enigma : solving the mystery of modern human origins by James Shreeve
The roots of civilization; the cognitive beginnings of man's first art, symbol, and notation. by Alexander. Marshack
Fewer