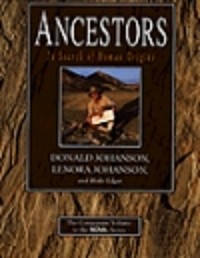 Ancestors : in search of human origins

"When he discovered "Lucy," the oldest skeleton of any erect-walking human ancestor ever found, Donald Johanson made headlines all over the world." "Johanson, author of Lucy: The Beginnings of Humankind, the controversial bestseller that altered the science of anthropology, is now the preeminent authority on human evolution. In Ancestors, his most ambitious work to date, Johanson calls on both extensive, hands-on field-work and current scientific theory to widen the ever-growing window to the human past." "Ancestors is the companion volume to a three-part miniseries - hosted by Johanson - of the award-winning PBS science series NOVA. With spectacular photographs and riveting accounts of Dr. Johanson's recent adventures in such exotic landscapes as fossil-rich eastern Africa and the Willandra Lakes region of Australia, the excitement of discovery is contagious. Like a good detective on a lead, Johanson crosses four continents, gathering clues to hominid anatomy, habitat, and placement along the fossil time line in an effort to piece together a compelling picture of human ancestry." "Johanson draws from the work of other evolution detectives - archeologists, biologists, geologists, other paleoanthropologists - introducing a cast of eccentric characters and giving a behind-the-scenes look at how scientists work. Johanson also delves into the three most hotly debated topics in the field: why hominids began to walk upright, whether they were "noble hunters" or "cunning scavengers," and at what point Homo sapiens evolved." "Full of anecdote, drama, innovative theory, and the mystery of human origins, Ancestors is a spell-binding read."--Jacket.… (more)

The Neandertal enigma : solving the mystery of modern human origins by James Shreeve
Lucy, the beginnings of humankind by Donald C. Johanson
In search of the Neanderthals : solving the puzzle of human origins by Chris Stringer
Bones of contention : controversies in the search for human origins by Roger Lewin
Making silent stones speak : human evolution and the dawn of technology by Kathy Diane Schick
10 more
People of the lake : mankind and its beginnings by Richard E. Leakey
The emergence of man by John E. Pfeiffer
Ascent to civilization : the archaeology of early man by John Gowlett
The complete world of human evolution by Chris Stringer, 1947-
Humankind emerging by Bernard Grant Campbell
The Origin of Modern Humans (Scientific American Library) by Roger Lewin
In the age of mankind : a Smithsonian book of human evolution by Roger Lewin
Neanderthal : neanderthal man and the story of human origins by Paul Jordan
The search for Eve by Michael Harold Brown
Written in bones : how human remains unlock the secrets of the dead
Fewer