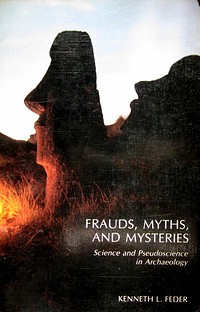 Frauds, myths, and mysteries : science and pseudoscience in archaeology

Frauds, myths, and supposed mysteries about humanity's past are moving targets for anyone committed to the scientific investigation of human antiquity. It is important for anyone interested in the human past to know, for example, that there is no evidence for a race of giant human beings in antiquity and no broken shards of laser guns under Egyptian pyramids. Debunking such nonsense is fun and useful in its own way, but more important is the process by which we determine that such claims are bunk. Now published by Oxford University Press, Frauds, Myths, and Mysteries: Science and Pseudoscience in Archaeology, Ninth Edition, uses interesting--and often humorous--archaeological hoaxes, myths, and mysteries to show how we can truly know things about the past through science. It is not just a book about how we know what isn't true about the human past--it's also about how we know what is true.… (more)

LibraryThing member marag
Feder really knows his stuff. And his stuff is the crazy bits of history and archaeology, the places where people have let their imaginations go wild without actually engaging their brains. This is an entertaining look at various frauds and myths in the field of archaeology, well-written,
Show More
intelligent, and informative.

You'll come out smarter, more skeptical, and meanwhile you'll have a great time. I highly recommend this book for anyone who's interested in history and/or archaeology.
Show Less
8 more
LibraryThing member Ella_Jill
This is, perhaps, my favorite history book. The author, a professor of anthropology at Central Connecticut State University, debunks various historical myths, like the possibility of the existence of Atlantis in very ancient times or ancient pre-Viking voyages from the Old World to the New.
Show More
However, what made his book so memorable to me is that in the process, by making comparisons with cultures that really existed and expeditions that did happen, he shows what constitutes credible archeological evidence and how persistent such evidence is. A small expedition may have passed through Florida several centuries ago, and it’s still possible to find physical evidence of their passing! He also shows, through concrete examples, how unreliable the evidence of “witnesses” is and how little credence can be given to it in the absence of more material proof. I also found his book very easy and entertaining to read.
Show Less
LibraryThing member neurodrew
debunks archeological mysteries and claims. The destruction of Atlantis myths and the information on the Indian Moundbuilders in the US were particularly interesting, but his prose was noticeably inexpert.
LibraryThing member Snukes
This book often reads more like an irritated man's soapbox than a scientific discussion.
LibraryThing member TheoClarke
A well-argued demonstration of the application of scientific method to archaeological speculation. The text is marred by some infelicities of style and a determination to show that Von Daniken is unethical as well as unscientific.
LibraryThing member jen.e.moore
We were a little at cross-purposes, the author and I - he's interested in proving that these beliefs are silly, and I'm interested in why people believe these things in the first place. It was a decent introduction to some of the weirdnesses of popularized pseudo-archaeology, but not quite what I
Show More
was looking for. (Also fairly interesting as a historical artifact: I had no idea there was a guy going around in the eighties telling people that humans originated in California.)
Show Less
LibraryThing member AndreasJ
Despite being intended - and I gather widely used - as a university textbook, this is written in a breezily informal and rather personal style. I might have prefered a bit more restraint, but Feder can be rather funny so the style's not without its virtues.

Each chapter deals with some particular
Show More
archaeological or palaeanthropological fraud or fringe theory; there are no "mysteries" covered in the sense of genuinely unexplained phenomena. While international favorites like the pyramids of Egypt do feature, most of the examples relate to the prehistory of the United States. This presumably primarily reflects the fact that Feder is a US author writing first and foremost for a US audience, but it might have been interesting if he'd commented on whether pseudo-archaeology is particularly prevalent in America: it's certainly easy to get the impression that it is from the book.

The book will infuriate you if you should be silly enough to believe in Atlantis, ancient astronauts helping to build the pyramids, or the like, but for the rest of us it's an entertaining and educational look at fringe ideas.
Show Less
LibraryThing member Razinha
Michael Shermer mentioned this book in his Why People Believe Weird Things, and I was curious of enough to read it. One of the few reasons Shermer gave at the end of his book, the only one that made any sense to me, was “because they want to”. Feder says of the Piltdown hoax: “Many accepted
Show More
the Piltdown evidence because they wished to—it supported a more comfortable view of human evolution.” A lot of hoaxes are successful because they have enough believers who want to believe them.

Of true archeological works, to which some ascribe nonsensical explanations, Feder says, “Let’s face it; I’m an archaeology nerd. Though I am a professional archaeologist with more than thirty years of experience excavating, analyzing, and writing about the human past, I continue to be awestruck when I am in the presence of the remnants of antiquity.” Which is why he dismantles the lunacies and brings to a general audience the frauds perpetrated by enterprising hoaxers. He also looks at the nonsense explanations of the like of Erich von Däniken’s, who can’t seem to understand simple ingenuity and would rather posit ancient aliens visiting and building pyramids and other constructions. Feder offers critical thinking exercises after each chapter, and answers frequently asked questions in a summary.

So why commit the frauds? Money is the biggest motivation; fame, of course; sometimes nationalism, and racism. AndUnfortunately, religion has also played a significant role in archaeological fraud. Many religions have their roots in remote antiquity. Some of their adherents dabble in archaeology, trying to prove the validity of their religious beliefs or claims through the discovery of archaeological evidence. Martin Luther, leader of the Protestant Reformation in the sixteenth century, asked, “What harm would it do if a man told a good strong lie for the sake of the good and for the Christian Church . . . a useful lie, a helpful lie, such lies would not be against God; he would accept them”Some just romanticize the past that never was, and then there are the plain old nut jobs.

To uncover frauds, science plays a big role. “The techniques used to get at knowledge we can feel confident in—knowledge that is reliable, truthful, and factual—are referred to as science. In large part, science is a series of techniques used to maximize the probability that what we think we know really reflects the way things are, were, or will be. Science makes no claim to have all the answers or even to be right all the time. On the contrary, during the process of the growth of knowledge and understanding, science is often wrong.”

Feder even tells prospective con artists the “Rules for a Successful Archeological Hoax” (not really...these are just some of the downfalls when a hoax is unveiled)
Give the people what they want - A hoax works best when the public has a predisposition to accept it in the first place.
Don’t be too successful - too many finds draw the wrong kind of attention
Learn from your mistakes - debunking hoaxes tells future hoaxers what not to do

Pyramids, Atlantis, ancient aliens, crop circles, Turin shrouds, psychic archeology, an ark of Noah, Feder covers a lot of ground (accidental humor.) The past is open to interpretation, unfortunately. Ultimately, then, we get the past we deserve. In every generation, thinkers, writers, scholars, charlatans, and kooks (these are not necessarily mutually exclusive categories) attempt to cast the past in an image either they or the public desire or find comforting. Biblical giants—some, apparently, walking their pet dinosaurs—large-brained, ape-jawed ancestors, lost tribes, lost continents, mysterious races, and ancient astronauts have all been a part of their concocted fantasies.
But I believe, and have tried to show in this book, that we deserve better—and we can do better. We deserve a veritable past, a real past constructed from the sturdy fabric of geology, paleontology, archaeology, and history, woven on the loom of science. We deserve better and can do better than weave a past from the whole cloth of fantasy and fiction. Finally, I hope I have shown in this book that the veritable past is every bit as interesting as those pasts constructed by the fantasy weavers of frauds, myths, and mysteries.
Show Less
LibraryThing member Devil_llama
The author discusses various hypotheses in the field of archaeolgy, and explains what the evidence suggests. Overall a very good book, but the author has the annoying, and all too common, habit of starting off his explanation of evidence against an idea by saying it is racist. This may be true, but
Show More
is not in any way evidence that it is inaccurate. Empirical evidence must be presented regardless of racism or sexism, and those factors in and of themselves are inadequate to dispute a hypothesis. In all cases, the author does go on the present evidence for his point of view, but the constant assumption that calling something racist automatically renders it inaccurate becomes a bit annoying at times.
Show Less
Fewer