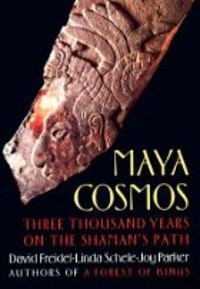 by David A. Freidel

"The ancient Maya, through their shamans, kings, warriors, and scribes, created a legacy of power and enduring beauty. The landmark publication of A Forest of Kings presented the first accessible, dramatic history of this great civilization, written by experts in the translation of glyphs. Now, in Maya Cosmos, Freidel, Schele, and Parker examine Maya mythology and religion, unraveling the question of how these extraordinary people, five million strong, have managed to preserve their most sacred beliefs into modern times." "In Maya Cosmos, the authors draw upon translations of sacred texts and histories spanning thousands of years to tell us a story of the Maya, not in our words but in theirs." "At the heart of this extraordinary world was the myth of Creation, as enduring and persuasive as any from the Old World. Recorded in stone texts and illustrated on pottery vessels, in books, and in stone at many ancient sites is the narrative of the Maize God and his children as they confront the Lords of Death in the Otherworld called Xibalba. The authors reveal the myth in its ancient form, not as a quaint story for children but as a map of the sky with the actions of the gods revealed in the movements of the Milky Way and the stars. They investigate the myth as the basis of government and the symbolism of political power, as a description of the daily lives of common people as they planted their fields of corn and cooked food for their children, as instructions for the afterlife and resurrection of the soul, and as the lesson at the heart of the famous Maya ballgame." "Maya Cosmos takes this Creation myth from its first expression three thousand years ago by the Olmecs, the first civilization in Central America, to its living expression in a Ch'a-Chak ceremony held in Yukatan a few years ago. As an archaeologist, David Freidel shows how using the myth and understanding its effect on the artifacts and architecture created by the ancients help explain what we excavate from the ground. As an epigrapher and iconographer, Linda Schele reads the texts and scenes that preserve the myth for the modern world. Between them, the cosmos of the ancient Maya comes to life and reveals the core of one of the greatest traditions of religious thought known from the ancient world." "However, the great contribution of Maya Cosmos comes in the connections it makes between the ancient and the modern Maya. Neither the Maya nor their religion is dead. Invited into their world by the Maya themselves, Freidel and Schele convey their personal experiences. You will stand beside David as his friend Don Pablo prays for rain in a Ch'a-Chak ceremony in Yukatan. Linda takes you to a divination ceremony in Chichicastenango and to the church where she receives the blessing and protection of a powerful Aj Q'ij." "Maya Cosmos tells us about one of the greatest, most enduring, and least-known religious traditions in human history. It reveals the extraordinary richness of this religion as well as the contributions it can make to humanity at large during the coming centuries."--BOOK JACKET.Title Summary field provided by Blackwell North America, Inc. All Rights Reserved… (more)

Popol vuh : the definitive edition of the Mayan book of the dawn of life and the glories of gods and kings by Dennis Tedlock
A forest of kings : the untold story of the ancient Maya by Linda Schele
The code of kings : the language of seven sacred Maya temples and tombs by Linda Schele
The Maya (Ninth edition) (Ancient Peoples and Places) by Michael D. Coe
The ancient Maya. by Sylvanus Griswold Morley, 1883-1948.
19 more
The blood of kings : dynasty and ritual in Maya art by Linda Schele
Breaking the Maya code by Michael D. Coe
Maya, the riddle and rediscovery of a lost civilization by Charles Gallenkamp
Chronicle of the Maya kings and queens : deciphering the dynasties of the ancient Maya by Simon Martin
The world of the ancient Maya by John S. Henderson
Rise and fall of the Maya Civilzation by J. E. Thompson
Yucatan before and after the conquest by Diego de Landa
An album of Maya architecture by Tatiana Proskouriakoff
Lost kingdoms of the Maya by Gene S. Stuart
Mexico by Michael D. Coe
Skywatchers by Anthony F. Aveni
Scribes, warriors, and kings : the city of Copán and the ancient Maya by William Leonard Fash
The mysterious Maya by George E. Stuart
The Maya: life, myth and art by Timothy Laughton
The art of Mesoamerica : from Olmec to Aztec by Mary Ellen Miller
The lost chronicles of the Maya kings by David Drew
A study of Maya art, its subject matter and historical development by Herbert Joseph Spinden
Indian rock art of the Southwest by Polly Schaafsma
Tikal, a handbook of the ancient Maya ruins, with a guide map by William R. Coe
Fewer