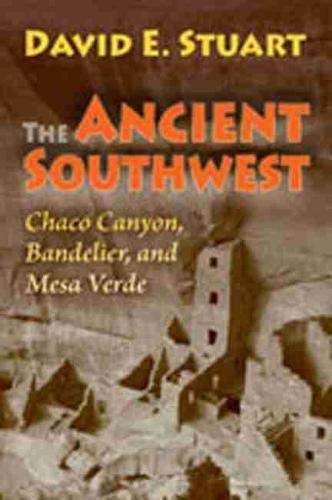 Over twenty-five years ago, David Stuart began writing award-winning newspaper articles on regional archaeology that appealed to general readers. These columns shared interesting, and usually little-known, facts and stories about the ancient people and places of the Southwest. By 1985, Stuart had penned enough columns to fill a book, Glimpses of the Ancient Southwest, which has been unavailable for years. Now he has rewritten most of his original articles to include recently discovered information about Chaco Canyon, Bandelier, and Mesa Verde. Stuart's unusual perspective focuses on both the past and the present: "Want to know why gasoline now costs $4.00 a gallon, and is headed higher, yet we have no instant solution? Chacoan, Roman, even Egyptian archaeology all provide elemental answers." The Ancient Southwest shares those with us.… (more)

LibraryThing member Helcura
This collection of newspaper columns was probably pretty interesting as a change from the usual newspaper fare, but collected as a book their weaknesses become all to apparent. This book is best used as a springboard for further research. The columns give a brief introduction to various archeological concepts for the area, but are unsatisfying due to the constraints of the newspaper style.

Puebloan Ruins of the Southwest by Arthur H. Rohn
People of Chaco : a canyon and its culture by Kendrick Frazier
A history of the ancient Southwest by Stephen H. Lekson
Ancient peoples of the American Southwest by Stephen Plog
Chiefdoms and other archaeological delusions by Timothy R. Pauketat
23 more
House of rain : tracking a vanished civilization across the American Southwest by Craig Childs
Anasazi America : seventeen centuries on the road from center place by David E. Stuart
In search of the old ones : exploring the Anasazi world of the Southwest by David Roberts
The great houses of Chaco by John Martin Campbell, 1927-
Anasazi ruins of the Southwest in color by William M. Ferguson
Ancient ruins of the Southwest : an archaeological guide by David Grant Noble
Those who came before : southwestern archeology in the National Park System : featuring photographs from the George A. Grant Collection and a portfolio by David Muench by Robert Hill Lister
The Mound-Builders by Henry Clyde Shetrone
First peoples in a new world : colonizing ice age America by David J. Meltzer
Spirits of earth : the effigy mound landscape of Madison and the Four Lakes by Robert A. Birmingham
Captives & cousins : slavery, kinship, and community in the Southwest borderlands by James Brooks, 1955-
Life on the rocks : one woman's adventures in petroglyph preservation by Katherine Wells
The Mantle site : an archaeological history of an ancestral Wendat community by Jennifer Birch, 1980-
The Chaco handbook : an encyclopedic guide by R. Gwinn Vivian
Anasazi Ancient People of the Rock by David Muench
The Archaeology of Clothing and Bodily Adornment in Colonial America (American Experience in Archaeological Pespective) by Diana DiPaolo Loren
Connecticut's indigenous peoples : what archaeology, history, and oral traditions teach us about their communities and cultures by Lucianne Lavin
Circular villages of the Monongahela tradition by Bernard K. (Bernard Klaus) Means, 1964-
The Aztecs by Michael Ernest Smith
The archaeology of Town Creek by Edmond A. Boudreaux
The Chaco meridian : centers of political power in the ancient Southwest by Stephen H. Lekson
Late prehistoric Florida : archaeology at the edge of the Mississippian world by Keith H. Ashley
Histories of maize : multidisciplinary approaches to the prehistory, linguistics, biogeography, domestication, and evolution of maize by John E. Staller
Fewer