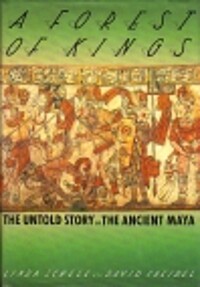 A forest of kings : the untold story of the ancient Maya

The recent interpretation of Maya hieroglyphs has given us the first written history of the New World as it existed before the European invasion. In this book, two of the first central figures in the massive effort to decode the glyphs, Linda Schele and David Freidel, make this history available in all its detail. A Forest of Kings is the story of Maya kingship, from the beginning of its institution and the first great pyramid builders two thousand years ago to the decline of Maya civilization and its destruction by the Spanish. Here the great historic rulers of pre-Columbian civilization come to life again with the decipherment of their writing. At its height, Maya civilization flourished under great kings like Shield-Jaguar, who ruled for more than sixty years, expanding his kingdom and building some of the most impressive works of architecture in the ancient world. Long placed on a mist-shrouded pedestal as austere, peaceful stargazers, the Maya elites are now known to have been the rulers of populous, aggressive city-states. Hailed as "a Rosetta stone of Maya civilization" (Brian M. Fagan, author of People of the Earth), A Forest of Kings is "a must for interested readers," says Evon Vogt, professor of anthropology at Harvard University.… (more)

LibraryThing member Carmenere
The purpose of this book, written by scholars on the subject, Linda Schele and David Freidl, appears to be twofold. Firstly, to reveal or rather decode the hieroglyphs, of what they believe, are the stories left behind by kings and nobles detailing their dynastic rule and conquests throughout
Show More
Mexico’s Yucatan peninsula. Secondly, in using this information the author’s attempt to reconstruct/fictionalize scenarios of what may have taken place. Certainly, this imagery is helpful in attempting to understand the workings of the ancient Maya yet the skeptic in me wonders just how much of what the author’s envision is accurate.
A Forest of Kings has left this reader swimming, with her head barely above water, in a cenote of dates, names, conquests, conjecture, assumptions and speculation , sometimes asking more questions than there are answers. There is a life preserver, however, If anything, this book has me wanting to read more, question more and try to understand more of these silent warriors.

Would I recommend it…………….. Yes, but not to everyone. One really must have some knowledge and interest in the Mayan culture to get any enjoyment from this book. If you are a beginner in this area I would recommend Stephens and Catherwood’s Incidents of Travel in Yucatan for an interesting overview.
Show Less
1 more
LibraryThing member tarliman.joppos
Excellent source material for my rolegaming campaign. Well organized, clear and lucid prose, and free of the woo that has so tragically infected Central American studies.
Fewer

A forest of kings : the untold story of the ancient Maya by Linda Schele (Paper Book)

The Maya by Michael D. Coe
Popol vuh : the definitive edition of the Mayan book of the dawn of life and the glories of gods and kings by Dennis Tedlock
Maya cosmos : three thousand years on the shaman's path by David A. Freidel
Breaking the Maya code by Michael D. Coe
The ancient Maya. by Sylvanus Griswold Morley, 1883-1948.
26 more
The code of kings : the language of seven sacred Maya temples and tombs by Linda Schele
1491 : new revelations of the Americas before Columbus by Charles C. Mann
Mexico by Michael D. Coe
The blood of kings : dynasty and ritual in Maya art by Linda Schele
Chronicle of the Maya kings and queens : deciphering the dynasties of the ancient Maya by Simon Martin
The world of the ancient Maya by John S. Henderson
Yucatan before and after the conquest by Diego de Landa
Maya, the riddle and rediscovery of a lost civilization by Charles Gallenkamp
The mysterious Maya by George E. Stuart
Lost kingdoms of the Maya by Gene S. Stuart
Scribes, warriors, and kings : the city of Copán and the ancient Maya by William Leonard Fash
The Toltecs, until the fall of Tula by Nigel Davies
An album of Maya architecture by Tatiana Proskouriakoff
The Maya world by Elizabeth P. Benson
The art of Mesoamerica : from Olmec to Aztec by Mary Ellen Miller
The broken spears : the Aztec account of the Conquest of Mexico by Miguel León Portilla
The Aztecs by Richard F. Townsend
Rise and fall of the Maya Civilzation by J. E. Thompson
Mysteries of the Mexican pyramids by Peter Tompkins
Kingdoms of gold, kingdoms of jade : the Americas before Columbus by Brian M. Fagan
Lost cities of the Maya by Claude F. Baudez
A study of Maya art, its subject matter and historical development by Herbert Joseph Spinden
Incidents of travel in Yucatan. by John Lloyd Stephens, 1805-1852
Atlas of ancient America by Michael D. Coe
Prehistoric Mesoamerica by Richard E. W. Adams
La vie quotidienne des Azteques a la veille de la conquete espagnole. by Jacques Soustelle, 1912-
Fewer