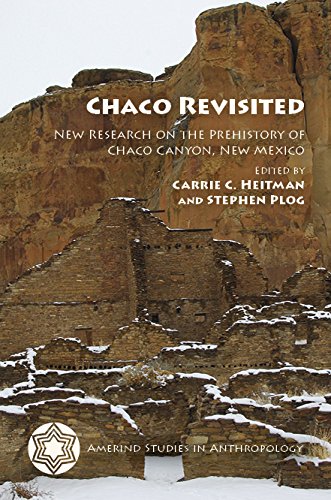 Tucson : The University of Arizona Press, 2015.

Chaco Canyon, the great Ancestral Pueblo site of the eleventh and twelfth centuries, has inspired excavations and research for more than one hundred years. Chaco Revisited brings together an A-team of Chaco scholars to provide an updated, refreshing analysis of over a century of scholarship. In each of the twelve chapters, luminaries from the field of archaeology and anthropology, such as R. Gwinn Vivian, Peter Whiteley, and Paul E. Minnis, address some of the most fundamental questions surrounding Chaco, from agriculture and craft production, to social organization and skeletal analyses. Though varied in their key questions about Chaco, each author uses previous research or new studies to ultimately blaze a trail for future research and discoveries about the canyon. Written by both up-and-coming and well-seasoned scholars of Chaco Canyon, Chaco Revisited provides readers with a perspective that is both varied and balanced. Though a singular theory for the Chaco Canyon phenomenon is yet to be reached, Chaco Revisited brings a new understanding to scholars: that Chaco was perhaps even more productive and socially complex than previous analyses would suggest.… (more)