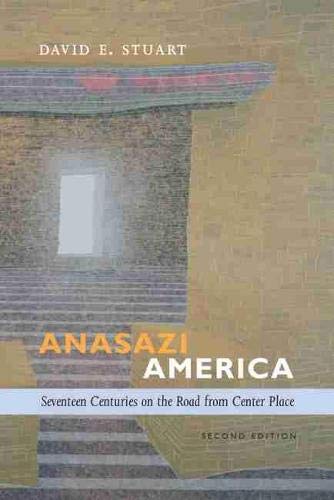 Anasazi America : seventeen centuries on the road from center place

"At the height of their power in the late eleventh century, the Chaco Anasazi dominated a territory in the American Southwest larger than any European principality of the time. Developed over the course of centuries and thriving for over two hundred years, the Chacoans' society collapsed dramatically in the twelfth century in a mere forty years. David E. Stuart incorporates extensive new research findings through groundbreaking archaeology to explore the rise and fall of the Chaco Anasazi and how it parallels patterns throughout modern societies in this new edition. Adding new research findings on caloric flows in prehistoric times and investigating the evolutionary dynamics induced by these forces as well as exploring the consequences of an increasingly detached central Chacoan decision-making structure, Stuart argues that Chaco's failure was a failure to adapt to the consequences of rapid growth--including problems with the misuse of farmland, malnutrition, loss of community, and inability to deal with climatic catastrophe. Have modern societies learned from the experience and fate of the Chaco Anasazi, or are we risking a similar cultural collapse?"--… (more)

The Chaco meridian : centers of political power in the ancient Southwest by Stephen H. Lekson
People of Chaco : a canyon and its culture by Kendrick Frazier
Ancient peoples of the American Southwest by Stephen Plog
Anasazi ruins of the Southwest in color by William M. Ferguson
Puebloan Ruins of the Southwest by Arthur H. Rohn
17 more
In search of the old ones : exploring the Anasazi world of the Southwest by David Roberts
Kiva, cross & crown : the Pecos Indians and New Mexico, 1540-1840 by John L. Kessell
Ancient ruins of the Southwest : an archaeological guide by David Grant Noble
The Chaco handbook : an encyclopedic guide by R. Gwinn Vivian
New light on Chaco Canyon by David Grant Noble
House of rain : tracking a vanished civilization across the American Southwest by Craig Childs
Those who came before : southwestern archeology in the National Park System : featuring photographs from the George A. Grant Collection and a portfolio by David Muench by Robert Hill Lister
Anasazi Ancient People of the Rock by David Muench
Indian rock art of the Southwest by Polly Schaafsma
The great houses of Chaco by John Martin Campbell, 1927-
First peoples in a new world : colonizing ice age America by David J. Meltzer
Roads to center place : a cultural atlas of Chaco Canyon and the Anasazi by Kathryn Gabriel
The Zuni enigma by Nancy Yaw Davis
Exploring Native North America by David Hurst Thomas
The Tewa world; space, time, being, and becoming in a Pueblo society by Alfonso Ortiz
Archaeology of the Southwest by Linda S. Cordell
A history of the ancient Southwest by Stephen H. Lekson
Fewer