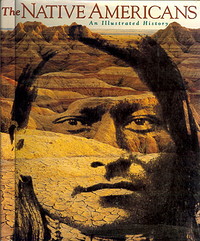 The Native Americans : an illustrated history

Dispossessed, of their ancestral homelands by successive invasions of Europeans, the first real Americans have long been cloaked in a veil of myth and legend that has hidden from us the true richness and diversity of Indian civilizations and cultures. This newly unfolding legacy represents an unparalleled body of untapped wisdom, which even now provides fresh perspectives on very modern problems. The astonishing reality of Indian history, presented here for the first time from the perspective of native Americans, will deepen our understanding of what it really means to be an American. The archaeological history of the native peoples of the Americas goes back more than 30,000 years. By the time Columbus landed in this "New" World, it was a very old world that already had seen entire civilizations rise and fall through the centuries. These linked continents were by then populated by some 75,000,000 people who spoke 2,000 distinct languages and had developed a rich diversity of separate cultures, all joined in trade by a venerable network that covered the entire northern continent. Here, in a fresh look at the Americas, is a view of this "new" world's magnificent sweep of history through the eyes of its original inhabitants. It is an inspiring story of their amazing adaptability to a challenging land, especially in the past five hundred years when native Americans were forced to cope with the introduction into their environment of the most rapacious predator they had ever faced: white European invaders. Spanning a thousand generations, from the time Ice Age man first set foot on this continent to the present, and beautifully written by five well-known authorities on Indian history and culture, this volume is lavishly illustrated with photographs, maps, and, the work of both historic and contemporary artists.… (more)

LibraryThing member SmithAlec
Summary: This book is about Native Americans and their history. It explains their origins and the rituals that they performed. It explained that there are many many tribes and they all differed greatly. It also explained that the extent of how much the tribes differed depended greatly on where they were located in the country.

Personal Reaction: Wow. This book covered so much. It is an excellent book to use to teach children about Native American History.

A Pictorial History of the American Indian by Oliver La Farge
Through Indian eyes : the untold story of Native American peoples
The First Americans
America's fascinating Indian heritage by James A. Maxwell
Touch the earth : a self-portrait of Indian existence by T.C. McLuhan
9 more
The American heritage book of Indians, by William Brandon
The Native Americans : the indigenous people of North America by Colin F. Taylor
Atlas of the North American Indian by Carl Waldman
The Indian heritage of America by Alvin M. Josephy, 1915-2005
Indians of the Plains by Robert Harry Lowie, 1883-1957
The sacred pipe : Black Elk's account of the seven rites of the Oglala Sioux by 1863-1950 Black Elk
First Peoples: A Documentary Survey of American Indian History by Colin G. Calloway
The archaeology of North America by Dean R. Snow
The Crow Indians, by Robert Harry Lowie, 1883-1957
Fewer