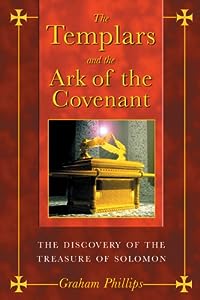 The Templars and the Ark of the Covenant : the discovery of the treasure of Solomon

Offers compelling evidence that the Knights Templar may have taken the Ark of the Covenant to the British Isles * Presents scientific evidence affirming the powers attributed to the Ark * Traces the Ark and the Stones of Fire from Jerusalem to Jordan and finally to central England, where the Knights Templar hid them in the 14th century According to legend the Ark of the Covenant was an ornate golden chest that was both a means of communicating with God and a terrible weapon used against the enemies of the ancient Israelites. In order to use it the high priest had to wear a breastplate containing twelve sacred gemstones called the Stones of Fire. These objects were kept in the Great Temple of Jerusalem until they vanished following the Babylonian invasion in 597 B.C.E. At the ancient ruins of Petra in southern Jordan, Graham Phillips uncovered evidence that 13th-century Templars found the Ark and the Stones of Fire, and that they brought these treasures back to central England when they fled the persecution of French king Philip the Fair a century later. The author followed ciphered messages left by the Templars in church paintings, inscriptions, and stained glass windows to what may well be three of the Stones of Fire. When examined by Oxford University scientists these stones were found to possess odd physical properties that interfered with electronic equipment and produced a sphere of floating light similar to ball lightning. The Bible asserts that the Ark had the power to destroy armies and bring down the walls of cities. Now Graham Phillips provides scientific evidence that these claims may be true and offers compelling documentation that the Ark may be located in the English countryside, not far from the birthplace of William Shakespeare at Stratford-upon-Avon.… (more)

Ark of the covenant

The Sign and the Seal: The Quest for the Lost Ark of the Covenant by Graham Hancock
The Knights Templar in the New World : how Henry Sinclair brought the Grail to Acadia by William F. Mann
The Hiram Key: Pharaohs, Freemasons and the Discovery of the Secret Scrolls of Jesus by Christopher Knight
The goddess, the grail & the lodge by Alan Butler, 1951-
Templars in America: From the Crusades to the New World by Tim Wallace-Murphy
8 more
The Lost Treasure of the Knights Templar: Solving the Oak Island Mystery by Steven Sora
The Sword and the Grail: Of the Grail and the Templars and a True Discovery of America by Andrew Sinclair
The stone puzzle of Rosslyn Chapel : the truth behind its Templar and Masonic secrets by Filip Coppens
Pirates and the lost Templar fleet : the secret naval war between the Knights Templar and the Vatican by David Hatcher Childress, 1957-
The lost colony of the Templars : Verrazano's secret mission to America by Steven Sora
Uriel's Machine: Uncovering the Secrets of Stonehenge, Noah's Flood and the Dawn of Civilization by Christopher Knight
The Templar meridians : the secret mapping of the New World by William F. Mann
The Templars' legacy in Montreal, the New Jerusalem by Francine. Bernier
Fewer