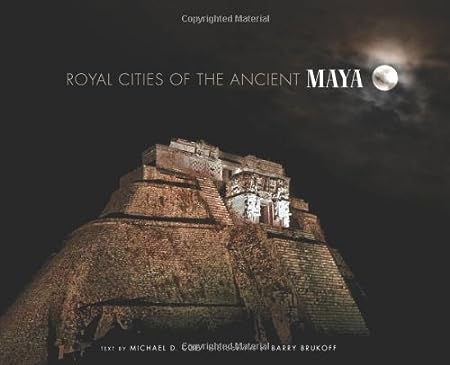 Royal cities of the ancient Maya

Traces the rise and fall of Maya civilization through its great royal cities, from El Mirador, the largest and oldest, to the rival city-states of the Classical period such as Tikal, Calakmul, Yaxchilán, Palenque, Toniná, and Copán. He then moves on to the great cities of the Terminal Classic period; at a time when the mighty centers of the southern lowlands were in a steep decline, cities to the north such as Uxmal and Kabah achieved a pinnacle of architectural beauty. After that he turns to the Postclassic period and Chichén Itzá in central Yucatán, a huge, cosmopolitan city that flourished during a military and cultural takeover by the Toltecs of central Mexico.

The ancient Maya. by Sylvanus Griswold Morley, 1883-1948.
Scribes, warriors, and kings : the city of Copán and the ancient Maya by William Leonard Fash
Maya, the riddle and rediscovery of a lost civilization by Charles Gallenkamp
Rise and fall of the Maya Civilzation by J. E. Thompson
The world of the ancient Maya by John S. Henderson
21 more
The code of kings : the language of seven sacred Maya temples and tombs by Linda Schele
Chronicle of the Maya kings and queens : deciphering the dynasties of the ancient Maya by Simon Martin
A forest of kings : the untold story of the ancient Maya by Linda Schele
Lost kingdoms of the Maya by Gene S. Stuart
The tomb in Ancient Egypt : royal and private sepulchres from the early dynastic period to the Romans by Aidan Dodson, 1962-
The lost chronicles of the Maya kings by David Drew
Popol vuh : the definitive edition of the Mayan book of the dawn of life and the glories of gods and kings by Dennis Tedlock
The Celtic World by Barry W Cunliffe
Breaking the Maya code by Michael D. Coe
Seeking our past : an introduction to North American archaeology by Sarah Ward Neusius
Maya cosmos : three thousand years on the shaman's path by David A. Freidel
Archaeology matters : action archaeology in the modern world by Jeremy A. Sabloff
The Maya by Michael D. Coe
Mesoamerica's ancient cities : aerial views of precolumbian ruins in Mexico, Guatemala, Belize, and Honduras by William M. Ferguson
The mysterious Maya by George E. Stuart
The ancient sun kingdoms of the Americas: Aztec, Maya, Inca. by Victor Wolfgang Von Hagen, 1908-
The Aztecs by Michael Ernest Smith
Bones : discovering the first Americans by Elaine Dewar
Secrets of the Great Pyramid by Tompkins, Peter(December 31, 1978) Hardcover
The ancient civilizations of Peru by John Alden Mason
The Aztecs by Richard F. Townsend
Fewer