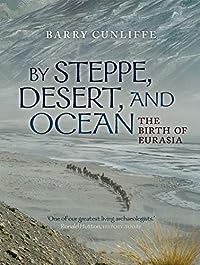 By steppe, desert, and ocean : the birth of Eurasia

By Steppe, Desert, and Ocean is nothing less than the story of how humans first started building the globalized world we know today. Set on a huge continental stage, from Europe to China, it is a tale covering over 10,000 years, from the origins of farming around 9000 BC to the expansion ofthe Mongols in the thirteenth century AD. An unashamedly "big history", it charts the development of European, Near Eastern, and Chinese civilizations and the growing links between them by way of the Indian Ocean, the silk Roads, and the great steppe corridor (which crucially allowed horse riders to travel from Mongolia to the GreatHungarian Plain within a year). Along the way, it is also the story of the rise and fall of empires, the development of maritime trade, and the shattering impact of predatory nomads on their urban neighbours. Above all, as this immense historical panorama unfolds, we begin to see in clearer focus those basic underlying factors - the acquisitive nature of humanity, the differing environments in which people live, and the dislocating effect of even slight climatic variation - which have driven changethroughout the ages, and which help us better understand our world today.… (more)

LibraryThing member annbury
This is an exemplary work of history by one of the greats of modern archaeology, and a real pleasure to read. In broad historic terms, Sir Barry shakes the kaleidoscope through which world (or at least Eurasian) history is viewed, from a series of discrete eras to a very long term view, and from a series of individual cultures to the way in which those cultures were tied together by the steppes. The writing is clear and graceful, the illustrations beautiful and instructive, and the maps spectacularly good.

This is an exemplary work of history by one of the greats of modern archaeology, and a real pleasure to read. In broad historic terms, Sir Barry shakes the kaleidoscope through which world (or at least Eurasian) history is viewed, from a series of discrete eras to a very long term view, and from a series of individual cultures to the way in which those cultures were tied together by the steppes. The writing is clear and graceful, the illustrations beautiful and instructive, and the maps spectacularly good.

For an American or European reader, the traditional view of Eurasian history is that of one center of civilization giving way to another (the Fertile Crescent, the Mediterranean, Northern Europe), a sort of updated Whig version of history that culminates with "the west". Instead, Sir Barry concentrates on the steppes. For millennia, groups of people have moved westward over the steppes, putting pressure on other groups and, at the end of the line, on urbanized cultures. That has affected the urbanized cultures (in many cases, it has overthrown them) but it has also tied them together, allowing communication and trade between distant centers. The author examines this process from very early on, as the mesolithic edged into the neolithic, with a detailed look at the geography of Eurasia, and proceeds up to the beginning of the modern era. As he moves forward through time, he looks at the people of the steppes themselves, and at their interactions with other cultures.

If this sounds like a lot of information, it is. It's tempting to say that Sir Barry gives us a new way of looking at world history, but it's not accurate: this isn't world history: it excludes the whole western hemisphere, most of Africa, and much of non-Chinese Asia. But his book is enormously enlightening on broad trends, and on specific patterns as well -- I had no idea that central Asian cultures were so highly evolved before the Mongol invasions. It's a lot of information, but also a lot of analysis, and analysis that does not seem aimed at other academics. My only problem with the book is the title: for a book that's 90% steppe-focussed, it's a bit misleading. But that's a quibble. For anyone who loves broad brush history with splendid detailing, this is a must read.… (more)
3 more
LibraryThing member annbury
wonderful book
LibraryThing member CarltonC
A well written broad history of Eurasia from 10,000BC to 1300AD, looking at two main themes, connectivity and mobility.
In such a long survey there is no space to deal with the detail of the many empires and movements of people, such as the crusades (summarised in four pages including a map and picture, concluding with the comment that it was “a relatively minor happening “). However that is the success of the book, that it does not get bogged down in detail, but provides an understanding of the broad sweep of history.
There can be the usual problem of history looking like a long list of successive empires conquering the previous empire, which whilst once dynamic, have settled into “decay”. However, the book has plentiful useful maps, which helped me understand the changing description of peoples, generally moving from the Steppes west to the Middle East and Europe, or east to China.
As with any such broad history, it helped connect more detailed histories that I had previously read into the “big picture “ and made me aware of peoples and empires about which I want to learn more.… (more)
LibraryThing member annbury
A wonderful book. Great maps and illustrations.
This is a part of the world that is new to me, except for the gobekle tepe ruins in eastern Turkey. The book reads very well, and clearly the author does not mean that trade always dominated the world, but people had to eat and liked to wear clothes from different areas always. This is a worthwhile addition to the books about early man.… (more)
Fewer

The horse, the wheel, and language : how Bronze-Age riders from the Eurasian steppes shaped the modern world by David W. Anthony
Ancestral journeys : the peopling of Europe from the first venturers to the Vikings by Jean Manco
Facing the ocean : the Atlantic and its peoples, 8000 BC-AD 1500 by Barry W. Cunliffe
The Making of the Middle Sea: A History of the Mediterranean from the Beginning to the Emergence of the Classical World by Cyprian Broodbank
1177 B.C. : the year civilization collapsed by Eric H. Cline
4 more
Europe before Rome : a site-by-site tour of the stone, bronze, and iron ages by T. Douglas Price
The Great Warming: Climate Change and the Rise and Fall of Civilizations by Brian Fagan
In search of the Indo-Europeans : language, archaeology, and myth by J. P. Mallory
A History of Ancient Egypt: From the First Farmers to the Great Pyramid by John Romer
Fewer