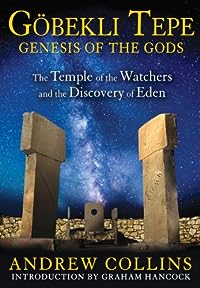 Göbekli Tepe: genesis of the gods : the Temple of the Watchers and the discovery of Eden

LibraryThing member georgee53
It appears the human civilisation is much older than we imagined. The origins may lie in places like Gobekli Tepe. Well researched, fact based inferences.
1 more
LibraryThing member Farree
The thing about books like this (and Erich von Däniken, et al -- narrated, of course, by Vincent Price) is their travelog side. This book does not dissapoint. Plus at the end (or the second half) is a wildly speculative essay on how Neanderthals may have been responsible!! If you're looking for science, this is not the place to search. Still, it's pretty fun, especially the search for 'The Garden of Eden.'… (more)
Fewer

Fingerprints Of The Gods: The Evidence of Earth's Lost Civilization by Graham Hancock
Heaven's mirror : quest for the lost civilization by Graham Hancock
The Ancient Giants Who Ruled America: The Missing Skeletons and the Great Smithsonian Cover-Up by Richard J. Dewhurst
The Cygnus mystery : unlocking the ancient secret of life's origins in the cosmos by Andrew Collins, 1957-
Atlantis beneath the ice : the fate of the lost continent by Rand Flem-Ath
23 more
Forgotten civilization : the role of solar outbursts in our past and future by Robert M. Schoch
Lost Knowledge of the Ancients: A Graham Hancock Reader by Glenn Kreisberg
Before Atlantis : 20 million years of human and pre-human cultures by Frank Joseph
Civilization one : the world is not as you thought it was by Christopher Knight, 1950-
The Velikovsky heresies : worlds in collision and ancient catastrophes revisited by Laird Scranton, 1953-
The dimensions of paradise : the proportions and symbolic numbers of ancient cosmology by John F. Michell
The world of the past. by Jacquetta Hopkins Hawkes, 1910-
Beneath the pyramids : Egypt's greatest secret uncovered by Andrew Collins, 1957-
Genes, giants, monsters, and men : the surviving elites of the cosmic war and their hidden agenda. by Joseph P. Farrell
The Ancient Alien Question: A New Inquiry Into the Existence, Evidence, and Influence of Ancient Visitors by Philip Coppens
The lost civilization enigma : a new inquiry into the existence of ancient cities, cultures, and peoples who pre-date recorded history by Philip Coppens
Prehistoric Avebury by Aubrey Burl
The Sirius Mystery: New Scientific Evidence of Alien Contact 5,000 Years Ago by Robert Temple
The Egypt Code by Robert Bauval
The Hidden History of the Human Race (The Condensed Edition of Forbidden Archeology) by Richard L. Thompson
Inside the Neolithic Mind: Consciousness, Cosmos, and the Realm of the Gods by David Lewis-Williams
Beyond Stonehenge by Gerald S. Hawkins
The cycle of cosmic catastrophes : flood, fire, and famine in the history of civilization by Richard B. Firestone
The Secret History of the Reptilians: The Pervasive Presence of the Serpent in Human History, Religion and Alien Mythos by Scott Alan Roberts
Earth under fire : humanity's survival of the Ice Age by Paul A. LaViolette
Lemuria & Atlantis: Studying the Past to Survive the Future by Shirley Andrews
The lost colonies of ancient America : a comprehensive guide to the pre-Columbian visitors who really discovered America by Frank Joseph
Maps of the ancient sea kings; evidence of advanced civilization in the ice age. by Charles H. Hapgood
Fewer