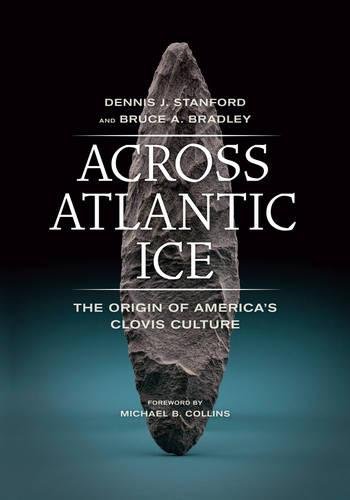 Across Atlantic ice : the origin of America's Clovis culture

Who were the first humans to inhabit North America? According to the now familiar story, mammal hunters entered the continent some 12,000 years ago via a land bridge that spanned the Bering Sea. Distinctive stone tools belonging to the Clovis culture established the presence of these early New World people. But are the Clovis tools Asian in origin? Drawing from original archaeological analysis, paleoclimatic research, and genetic studies, noted archaeologists Dennis J. Stanford and Bruce A. Bradley challenge the old narrative and, in the process, counter traditional--and often subjective--approaches to archaeological testing for historical relatedness. The authors apply rigorous scholarship to a hypothesis that places the technological antecedents of Clovis in Europe and posits that the first Americans crossed the Atlantic by boat and arrived earlier than previously thought. Supplying archaeological and oceanographic evidence to support this assertion, the book dismantles the old paradigm while persuasively linking Clovis technology with the culture of the Solutrean people who occupied France and Spain more than 20,000 years ago.… (more)

LibraryThing member davidveal
This is a masterful presentation of a fascinating new dimension to Native American studies, anthropological and prehistoric. It should be useful to the professional, but it is quite readable to the serious amateur.
1 more
LibraryThing member ritaer
I will admit that I read only the introduction and the summary of this rather technical book. The average lay person will probably do the same as pages of drawings of flint points are rather dry reading. Some may trumpet this work as proof that the America's were peopled from Europe rather than Asia in furtherance of some theory or other. The author's theories are far more modest. They point out that the Beringian hypothesis has been challenged on several fronts. Furthermore, ancestral forms of Clovis style weapons have not been found in NE Asia or in N Central North America, where they might be expected. On the other hand, they lay out convincing comparisons of Clovis points to the productions of the Solutrean cultures that lived along the icy northern shore of the Iberian Peninsula during the last great ice age. They hypothesize tha peoples reliant on hunting sea mammals along the pack ice could have moved north and west and eventually reached N. America, eventually abandoning marine resources and moving inland. Quite an interesting idea. The main problem with verification is rising sea levels submerged much of the land on which these peoples would have lived, making discovery of artifacts difficult.… (more)
Fewer

First peoples in a new world : colonizing ice age America by David J. Meltzer
The Moundbuilders : ancient peoples of eastern North America by George R. Milner
Bones, boats & bison : archeology and the first colonization of western North America by E. James Dixon
The first Americans : in pursuit of archaeology's greatest mystery by J. M. Adovasio
After the Ice Age : the return of life to glaciated North America by E. C. Pielou, 1924-
26 more
The great journey : the peopling of ancient America by Brian M. Fagan
In search of the Neanderthals : solving the puzzle of human origins by Chris Stringer
After the Ice: A Global Human History 20,000-5000 BC by Steven Mithen
In search of Ice Age Americans by Kenneth B. Tankersley
Bones : discovering the first Americans by Elaine Dewar
The mound builders by Robert Silverberg
America B.C. : ancient settlers in the New World by Barry Fell
A history of the ancient Southwest by Stephen H. Lekson
The First Peoples of the Northeast by Esther K. Braun
Advanced Civilizations of Prehistoric America: The Lost Kingdoms of the Adena, Hopewell, Mississippians, and Anasazi by Frank Joseph
Cahokia : ancient America's great city on the Mississippi by Timothy R. Pauketat
Connecticut's indigenous peoples : what archaeology, history, and oral traditions teach us about their communities and cultures by Lucianne Lavin
The Southeastern Indians by Charles M. Hudson
The lost empire of Atlantis : history's greatest mystery revealed by Gavin Menzies
Ancient North America : the archaeology of a continent by Brian M. Fagan
The horse, the wheel, and language : how Bronze-Age riders from the Eurasian steppes shaped the modern world by David W. Anthony
Maps of the ancient sea kings; evidence of advanced civilization in the ice age. by Charles H. Hapgood
What this awl means : feminist archaeology at a Wahpeton Dakota village by Janet Spector
Basketry technology : a guide to identification and analysis by J. M. Adovasio
Archaeology of Precolumbian Florida by Jerald T. Milanich
Search for the first Americans by David J. Meltzer
The mind in the cave : consciousness and the origins of art by J. David Lewis-Williams
The archaeology of New York State by William Augustus Ritchie
Indian New England Before the Mayflower by Howard S. Russell
Cro-Magnon : how the Ice Age gave birth to the first modern humans by Brian M. Fagan
Atlas of ancient America by Michael D. Coe
Fewer