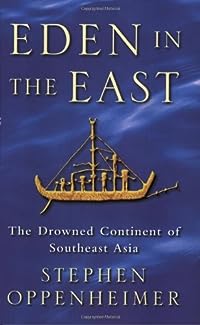 Eden in the East : the drowned continent of Southeast Asia

This book completetly changes the established and conventional view of prehistory by relocating the Lost Eden--the world's first civilisation--to Southeast Asia. At the end of the Ice Age, Southeast Asia formed a continent twice the size of India, which included Indochina, Malaysia, Indonesia, and Borneo. In Eden in the East, Stephen Oppenheimer puts forward the astonishing argument that here in southeast Asia--rather than in Mesopotamia where it is usually placed--was the lost civilization that fertilized the Great cultures of the Middle East 6,000 years ago. He produces evidence from ethnography, archaeology, oceanography, creation stories, myths, linguistics, and DNA analysis to argue that this founding civilization was destroyed by a catastrophic flood, caused by a rapid rise in the sea level at the end of the last ice age.… (more)

Oppenheimer presents an astonishing array of evidence - historic, linguistic and genetic - in support of his claim. He also lends strong support to the now orthodox position that Polynesian migrations took place from west to east, not vice versa as claimed by Thor Heyerdahl.
Show Less
1 more
LibraryThing member rajaratnam
Easy to understand but difficult to accept. Calls on a very wide range of sources from geology, archeology, linguistics, genetics and ancient myths. But where is the physical evidence? Provocative, but not persuasive.
Fewer

Oedipus and Akhnaton: myth and history. by Immanuel Velikovsky, 1895-1979
American genesis: the American Indian and the origins of modern man by Jeffrey Goodman
The great journey : the peopling of ancient America by Brian M. Fagan
The lost continent of Mu by James Churchward, 1852-1936
Forbidden archeology : the hidden history of the human race by Michael A. Cremo
22 more
Mapping human history : discovering the past through our genes by Steve Olson
Maps of the ancient sea kings; evidence of advanced civilization in the ice age. by Charles H. Hapgood
Centuries of darkness : a challenge to the conventional chronology of Old World archaeology by Peter (Peter J.) James
Voices of the rocks : a scientist looks at catastrophes and ancient civilizations by Robert M. Schoch
The statues that walked : unraveling the mystery of Easter Island by Terry L. Hunt
The Atlantis Blueprint: Unlocking the Ancient Mysteries of a Long-Lost Civilization by Colin Wilson
Voyages of the Pyramid Builders: The True Origins of the Pyramids from Lost Egypt to Ancient America by Robert M. Schoch
Earth under fire : humanity's survival of the Ice Age by Paul A. LaViolette
The Giza Power Plant : Technologies of Ancient Egypt by Christopher Dunn
World prehistory : a brief introduction by Brian M. Fagan
Noah's flood : the new scientific discoveries about the event that changed history by William B. F. Ryan
Man's conquest of the Pacific : the prehistory of Southeast Asia and Oceania by Peter S. Bellwood
The great human diasporas : the history of diversity and evolution by L. L. (Luigi Luca) Cavalli-Sforza, 1922-
The secret of the Incas : myth, astronomy, and the war against time by William Sullivan
Ancient man : a handbook of puzzling artifacts by William R. Corliss
After the Ice: A Global Human History 20,000-5000 BC by Steven Mithen
Lines to the mountain gods : Nazca and the mysteries of Peru by Evan Hadingham
Uriel's Machine: Uncovering the Secrets of Stonehenge, Noah's Flood and the Dawn of Civilization by Christopher Knight
Lost star of myth and time by Walter Cruttenden
The Cygnus mystery : unlocking the ancient secret of life's origins in the cosmos by Andrew Collins, 1957-
Signs in the Sky: Prophecies for the birth of a New Age by Adrian Gilbert
The path of the Pole by Charles H. Hapgood
Fewer