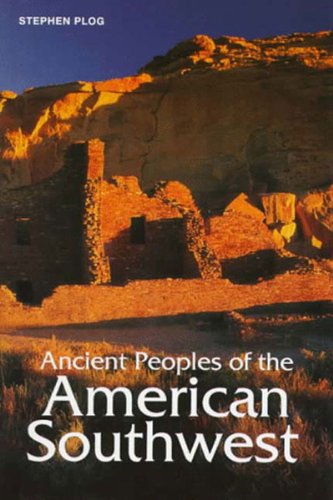 Ancient peoples of the American Southwest

Most people are familiar with the famous pre-Columbian civilizations of the Aztecs and Maya of Mexico, but few realize just how advanced were contemporary cultures in the American Southwest. Here lie some of the most remarkable monuments of America's prehistoric past, such as Chaco Canyon and Mesa Verde.Ten thousand years ago, humans first colonized this seemingly inhospitable landscape with its scorching hot deserts and upland areas that drop below freezing even during the early summer months. The initial hunter-gatherer bands gradually adapted to become sedentary village groups. The high point of Southwestern civilization was reached with the emergence of cultures known as Anasazi, Hohokam, and Mogollon in the first millennium AD.Interweaving the latest archaeological evidence with early first-person accounts, Stephen Plog explains the rise and mysterious fall of Southwestern cultures. For this revised edition, he discusses new research and its implications for our understanding of the prehistoric Southwest. As he concludes, the Southwest is still home to vibrant Native American communities who carry on many of the old traditions.… (more)

LibraryThing member ahystorianII
Good. This is just a basic history of the Prehistoric Indians of the Southwest. Lots of pictures. Nice format. It was an introductroy book for me, so i can't really give a good review. Talks about paleo, archaic and village indians. Breaks village indians down into the three bigger cultural groups of Anasazi, Mogollon, and Hohokam.… (more)
1 more
LibraryThing member antiquary
This is a clear description of the cultures usually called Anasazi, Mogollon, and Hohokom, as well as the previous peoples who lived in the same region (the American southwest) and brief accounts of the people who followed them into historical (post-European-contact) times. The author had experience as a field archaeologist in the area from his teens onward and does well at conveying the landscapes in which these cultures developed and their interaction wit their environments.… (more)
Fewer

People of Chaco : a canyon and its culture by Kendrick Frazier
Anasazi America : seventeen centuries on the road from center place by David E. Stuart
Ancient ruins of the Southwest : an archaeological guide by David Grant Noble
Anasazi ruins of the Southwest in color by William M. Ferguson
In search of the old ones : exploring the Anasazi world of the Southwest by David Roberts
20 more
Those who came before : southwestern archeology in the National Park System : featuring photographs from the George A. Grant Collection and a portfolio by David Muench by Robert Hill Lister
House of rain : tracking a vanished civilization across the American Southwest by Craig Childs
Anasazi Ancient People of the Rock by David Muench
The Chaco meridian : centers of political power in the ancient Southwest by Stephen H. Lekson
Exploring Native North America by David Hurst Thomas
The Moundbuilders : ancient peoples of eastern North America by George R. Milner
Ancient North America : the archaeology of a continent by Brian M. Fagan
New light on Chaco Canyon by David Grant Noble
The Zuni enigma by Nancy Yaw Davis
Indian rock art of the Southwest by Polly Schaafsma
A Field guide to rock art symbols of the greater Southwest by Alex Patterson
Prehistoric Indians of the Southwest, by H. M. (Hannah Marie) Wormington, 1914-
The ancient Southwest : Chaco Canyon, Bandelier, and Mesa Verde by David E. Stuart
The Tewa world; space, time, being, and becoming in a Pueblo society by Alfonso Ortiz
Puebloan Ruins of the Southwest by Arthur H. Rohn
Hidden cities : the discovery and loss of ancient North American civilization by Roger G. Kennedy
Breaking the Maya code by Michael D. Coe
Search for the first Americans by David J. Meltzer
Ancient encounters : Kennewick Man and the first Americans by James C. Chatters
Atlas of the North American Indian by Carl Waldman
Fewer